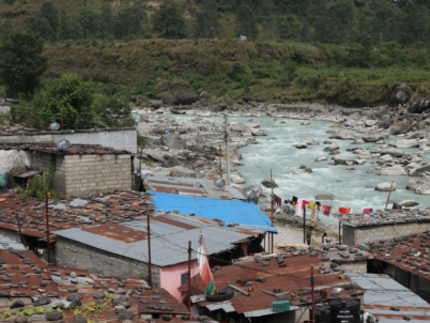 Photo: Melanie Fischer
Kaseri – a settlement of squatters – located directly on the bank of the flood-prone Seti Khola river

Although glacial lake outburst floods (GLOFs) have a low frequency, recent studies propose an annual occurrence of 1.3 GLOFs per year across the Hindu-Kush-Himalaya (HKH) mountains during the past three decades, their high water and sediment load presents a significant threat to downvalley communities. Our study addresses this problem on two spatial levels: First, we analyse the susceptibility of glacial lakes to GLOFs across the entire HKH region and second, we perform a local GLOF risk assessment for Nepal’s second largest city, Pokhara.

The basis of our first study is the currently most complete inventory of HKH GLOFs in the past three decades, which comprises 38 events. In order to identify key predictors for GLOF susceptibility, a number of potential geomorphic, geologic, and climatic GLOF predictors are tested in a multivariate logistic regression model. We are assessing, whether spatially distinct climatic conditions along the HKH, e.g. potentially seasonal precipitation patterns influenced by the Indian summer monsoon in its south-eastern ranges, are driving GLOF susceptibility.

In our second study, we are applying the standard step method to hydraulically model flood stages along the Seti Khola river, which drains the Pokhara valley. In 2012, a large-scale flood along this river caused over 70 fatalities. Hence, the aim of this study is to simulate this past event as well as potential future GLOF inundation scenarios in the study area. Resulting GLOF hazard maps are combined with data on population density and infrastructure to inform GLOF risk assessment.

Photo: Melanie Fischer
Kaseri – a settlement of squatters – located directly on the bank of the flood-prone Seti Khola river