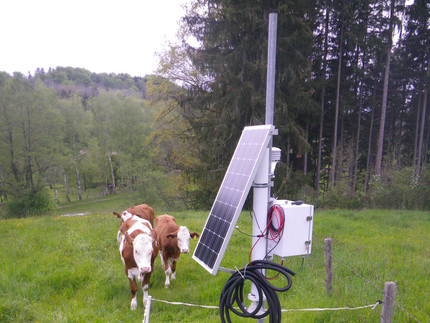 Photo: group
CRNS in the field

The innovative technology of Cosmic Ray Neutron Sensing (CRNS) is able to observe soil moisture in a radius of up to 150 metres around a sensor unit and down to several decimetres below the surface (the "root zone"). The measurement makes use of neutrons that are generated by cosmic radiation. These neutrons are slowed down when the collide with hydrogen nuclei in the soil... and most of the hydrogen in soils is effectively from water!

Our lab is operating several types of neutron sensors for soil moisture observation at different locations in Germany and world-wide. Part of the our equipment are four "conventional" sensors of the type "Hydroinnova CRS-1000" (using Helium-3 als as the so-called counting gas), one more sensitive "Hydroinnova CRS-2000-B" (based on Borontrifluoride) as well as one ultra-sensitive sensor that is based on new detector technology using Lithium-6 (Lab-C NeuSens Dual). Currently, the sensors are operated as a dense CRNS network on the ATB field lab in Marquardt, as part of the DFG-funded "Cosmic Sense".

This equipment belongs to the  Subsurface Hydrology.

Photo: group
CRNS in the field