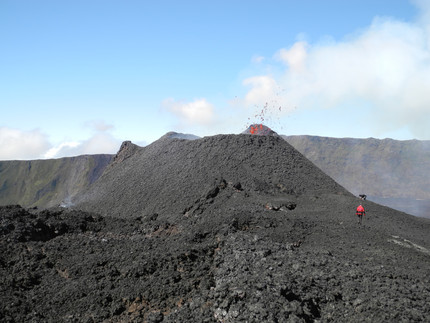 Volcanic eruptions and earthquakes are two of the most fascinating and spectacular manifestations of the elemental geological forces that have changed our planet for many millions of years. The earth is dotted with volcanoes, which are partly lined up like elements of a chain, or are isolated in the middle of a tectonic plate. While some volcanoes are inactive, others erupt every now and then, and others erupt constantly. The effects of eruptions can be devastating for the immediate surroundings due to lava flows, pyroclastic density currents, ash and / or toxic gases. However, depending on the nature and size of the eruption, an eruption can also become a global hazard that endangers, for example, agriculture or livestock worldwide.

The research of the working group seismology (in the area of general geophysics) is in focussed on the mechanisms generating earthquakes and the propagation of seismic waves. As seismic signals such as earthquakes accompany processes such as magma storage, transport and eruption, seismology allows tracking different processes at depth, as well as the transition to the surface and the atmosphere in real time and non-invasively. The result is a comprehensive, quantitative picture of movements and deformations in the entire physical system at a high temporal resolution, which cannot be directly observed from the surface. Using seismology, one can monitor systems that are prone to start hazardous processes, anticipate catastrophic events, and provide an early warning.

Furthermore, the working group seismology deals with other mass movement events such as floods beneath a glacier or in not glaciated regions also called GLOFs (Glacial Lake Outburst Floods). They endanger both mountainous and flat regions through erosion, flooding and sediment deposition and are a serious hazard in times of global climate change and melting glaciers.