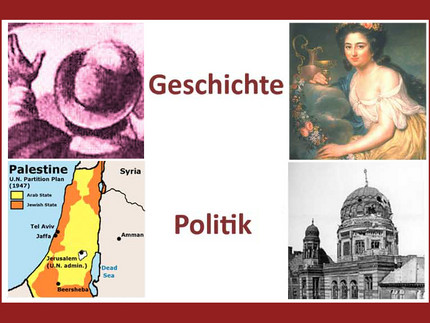 Our political-, social-, and intellectual history-oriented research and teaching revolves around the European history of the Jews in the Early Modern and Modern Age. We explore both the Sephardic cultures on the Iberian and Apennine peninsulas and the Ashkenazi cultures of Prussia and Poland. Special emphasis laid on German-Jewish relations in the 19th and 20th century, including issues of emancipation, acculturation-assimilation, identity and mentality. We are also especially interested in the history of the Landjuden as well as the history of the Jews in Brandenburg-Prussia.

In terms of institutional affiliation, the Research Section is in part carried by the Chair of Modern History II (German-Jewish History,  page in German). Close cooperation exists with the Moses Mendelssohn Center (page in German) as well as with the Center for Jewish Studies Berlin-Brandenburg.

For more information on research and teaching in the Research Section Jewish History, go to the websites of the respective associates.

The following staffers work in this area