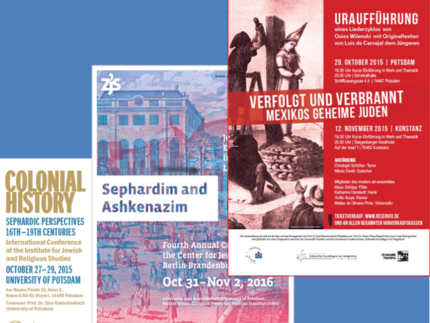 Established at the University of Potsdam in the intersection of Religious Studies and Jewish Studies, the Chair of Religious Studies and Jewish Thought is dedicated to the study of Jewish thought and Jewish cultures of knowledge from the Middle Ages to the modern era. Our research is non-confessional in its approach, informed by the methods and aims of historical and cultural studies. One special concern is the study of Jewish-Christian relations in different contexts and cultures. Another aim is the establishment of a permanent research profile dedicated to “Sephardic Studies,” i.e. studies in the histories and cultures of Iberian Jews before and after the expulsions between 1492 and 1498.

Such a focus is also of great significance since Iberian Jewish scholars are central to our understanding of the history of medieval philosophy and the development of early modern bodies of knowledge. Furthermore, recent scholarship has attributed to Conversos (baptized Sephardim and their descendants, some of whom clandestinely continued to adhere to Judaism) an important influence on the emergence of pre-modern identities, cultural hybridity and early modern forms of religious scepticism, the significance and relevance of which extend far beyond the academic boundaries of Jewish Studies. With this focus on “Sephardic Studies”, the University of Potsdam joins and enriches the current research on these topics, which is mainly conducted in Spain, the United States, and Israel. It also hopes to reach out to prospective students interested in Spanish or Portuguese, the Iberian Peninsula, and Latin America.

Through the qualifications of the current chair holder, doctorate and habilitation projects in Religious and Jewish Studies, as well as in the field of Jewish history, are welcome.