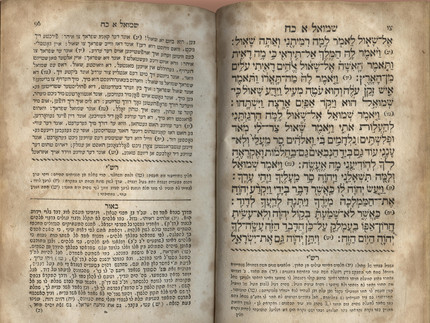 1. Sam 28. Text, translation and commentaries in der 5th ed. of the Samuel volume of the Kitve Qodesh, Vienna 1839.

In 1780, the first volume of an innovative Biblical commentary was released: the Biur (elucidation), a project headed by Moses Mendelssohn. In it, the High German translation of the torah (the books from Genesis through to Deuteronomy), carried out by Mendelssohn himself, is juxtaposed with the Hebrew text. Classical medieval interpretations and a modern commentary are collocated, and a text-critical apparatus is provided as well. With good reason, this work is regarded as a central datum of the European Jewish Enlightenment, the Haskalah.

After the demise of Mendelssohn, Jewish enlighteners, Maskilim, of the second generation set about expanding his idea to the other books of the Hebrew Bible, the Prophets and the Hagiographa. Among them, Juda Jeitteles (1773, Prague-1838, Vienna) and Juda Leib ben Zeeb (1764 near Crakow-1811, Vienna) exceed exceptionally. Both of them acquire renown in their day as great philologists both for Aramaic and Hebrew and as steady contributors to the review Ha-Meassef (the collector), the most important periodical of the Haskalah movement. Their Biblical commentaries were published under the title Kitve Qodesh (Holy Scriptures) in Vienna in numerous editions, but nevertheless are extremely hard-to-reach today and, as even their authors, widely forgotten.

It is the purpose of the project to investigate and to contextualise the Biblical interpretation of these two Jewish thinkers of the enlightenment era. In what way becomes enlightenment manifest in their oeuvre? How are their commentaries in dialogue with the quasi canonical interpreters of the Medieval period and the Rabbinic tradition on the one side, and with the modern critical Christian exegetes of their day on the other?

funded by the DFG (Deutsche Forschungsgemeinschaft)

1. Sam 28. Text, translation and commentaries in der 5th ed. of the Samuel volume of the Kitve Qodesh, Vienna 1839.