The Chair of War Studies is the only one of its kind in Germany. It is dedicated to military history and to the cultural history of violence, and is a central venue of liaison between the university and other research institutions investigating military history, between different methodical approaches within this varied discipline, as well as for the transfer of academic knowledge at both a national and international level. We seek to contribute to making Potsdam, with its history and its orientation towards to the future, more visible internationally as a centre of interdisciplinary war studies.

The Chair addresses military history and the cultural history of violence from the Early Modern Period to the present. It examines the foundations, dynamics and consequences of violent conflicts on the national and international stage. Drawing on interdisciplinary approaches, the Chair analyses how state, society and armed forces interact with one another. Its principal research focus is the nineteenth and twentieth century.

Located at the Chair, moreover, are two study programmes at Master level that are unique in Germany. Both are interdisciplinary, international and practice-orientated: The MA in War and Conflict Studies is a single degree at the University of Potsdam, in which predominantly German and European students research violent phenomena in the past and the present in small groups. The MA in International War Studies is a double degree programme with University College Dublin, which offers students the possibility of forming networks in the Anglo-Saxon world of war studies and which is aimed above all at an international audience.

Both study programmes combine the ambition to explore the subject of war and conflict in the past and the present from a multitude of different professional and national perspectives. Alongside concrete armed conflicts, the interactions between war and violence, security and stability, conflict and development are hereby illuminated. Our range of courses therefore offers a broad selection from history, political science, sociology and international law: from Clausewitz to cyber wars.

The work of the Chair profits enormously from a variety of partners located both in Potsdam itself and in nearby Berlin. Among the most important academic partners are the Centre for Military History and Social Sciences of the Bundeswehr (ZMSBw), the Federal Archives and the Federal Military Archives. Good working relations exist with the Federal Academy for Security Policy (BAKS), as well as the Federal Office for Information Security (BSI) and the Bundeswehr’s own consulting agency. Think tanks, political foundations and the Berlin-based media actively support us with teaching events and internships. An exceptional relationship continues to exist with the Federal Ministry of Defence, but also with the Federal Foreign Office and the Federal Ministry for Economic Cooperation and Development, which approach the subject of war and conflict from very different perspectives.

The Chair’s online presence is designed to illustrate the entire thematic diversity of the work of the Chair described above. If you are interested in any aspect of our work, do not hesitate to contact us.

The global presence of military conflict in today‘s societies has also changed the mindset of historical research that deals in-depth with war, violent conflict and the military. The series, which was established in 2017, showcases studies of outstanding academic quality on modern military and the cultural history of violence. Methodologically broad in scope, the series also incorporates approaches from sociology and political science. The temporal and spatial framework is similarly wide: it ranges from antiquity to the contemporary period and prioritises global historical areas of focus, in order to generate more attention in German-speaking countries for, especially, non-European histories of the military and of violence. 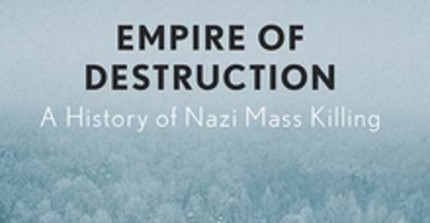 Empire of Destruction: A History of Nazi Mass Killing

The first comparative, comprehensive history of Nazi mass killing – showing how genocidal policies were crucial to the regime’s strategy to win the war.