“The current developments stand within a centuries-old tradition” – Slavist Studies scholar Prof. Dr. Alexander Wöll on the war in Ukraine 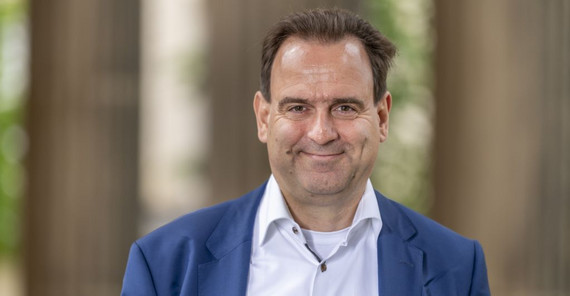 Photo : Tobias Hopfgarten
Alexander Wöll, Professor for the Culture and Literature of Central and Eastern Europe

Many generations of Ukrainians have already experienced the loss of independence, says Alexander Wöll. The Professor of the Culture and Literature of Central and Eastern Europe knows the history of Eastern Europe well, and he also has numerous academic contacts in Ukraine. After the outbreak of the war, for example, he took in a literary scholar and poet who had fled the war. In this interview, he explains, among other things, the Ukrainian-Russian relationship, the conflicting war coverage of both countries, and talks about the kind of help people on the run need most right now.

Dr. Wöll, how would you assess the relationship between Russia and Ukraine in terms of cultural history? Are there actually historical starting points for the current developments?

The medieval empire of Kievan Rus, which existed until the thirteenth century, is a predecessor state of Ukraine, Belarus and Russia alike. In 1654, Ukraine lost its sovereignty for the first time in the real sense, with the Treaty of Pereyaslav between the Cossack leadership and the Russian tsar. At that time it became a peripheral province in the Russian Empire. In the twentieth century, Ukraine then declared independence six times - and lost it five times. The loss of sovereignty is not some theoretical threat for Ukrainians; many generations have experienced this loss. Time and again, they have been the victims of power games. The current developments are therefore part of a centuries-old tradition. According to studies by the British historian Robert Conquest, Stalin starved to death up to 14 million Ukrainians in a genocide in the winter of 1932. This starvation of millions of people has gone down in the history books as the “Holodomor.” Putin’s war of aggression - in an essay written in December 2021, Putin denied Ukraine any right to its own state and culture - stands squarely within the tradition of this question of sovereignty.

The coverage of events is virtually opposite in Ukraine and Russia, and not only because the two countries are adversaries. Putin relies on censorship and the dissemination of a centrally prescribed view with the help of the state media channels, especially the television channels. The Ukrainian president invites the global press, but from day one also operates intensively with his channels in the social media, addressing the world directly via Facebook, Twitter and other social media. How do these different strategies come about - and do both achieve what they want?

In the field of journalism, Putin has already lost his war of aggression. No enlightened, educated person in the West can believe that Ukraine must be freed from drug addicts, gays and Nazis when a Jewish president whose native language is Russian is in office there, democratically legitimized in free elections by 73 percent of the population as their representative. These are just repetitions of Stalinist equations of all enemies with Nazis, which has been the case since Trotsky was regularly depicted with swastikas in the 1930s. During the the Cold War, the United States replaced the Nazis. Every “bad guy” got a swastika. It is a really infantile, stupid game that has been going on for about ninety years. Putin, however, through press censorship and propaganda, somehow manages on the one hand to get some Russians to support his approach, and on the other hand, he has created such a large apparatus of intimidation that people no longer dare to protest. Consequently, no one in Ukraine wants to be “freed” into slavery by a dictatorial and authoritarian Russia. Young people in Ukraine in particular are determined to prevent this with their own lives, so 43-year-old Volodymyr Selenskyj has already won the war on this field.

What does this war mean for the post-Soviet territory as a whole?

Russia has not managed to shed its illusions regarding its identity as an imperial world power. In a certain sense, we could even say that since Ivan the Terrible, constant domestic colonization and aggressive expansion have been the country’s only methods of achieving coherence. After all, the colonies are not scattered somewhere in the world, but were subjugated by campaigns of conquest, completely Russified culturally, and deprived of their own languages and cultures. In this respect, all other states in the post-Soviet space can very realistically assume that, without NATO’s protection, they will sooner or later become victims of Russia’s war campaigns.

A number of political actors - such as Turkish President Erdogan or Israeli Prime Minister Bennett, as well as others such as the Pope - have put themselves forward as mediators between Ukraine and Russia. In your view, what are the prospects for negotiations between the two warring parties, and what role could third parties play?

Unfortunately, we know from the era of National Socialism and the Second World War that negotiations are almost hopeless when a ruler is obsessed with a pathological idea. Putin will use any “negotiation” only as clumsy propaganda to show how much he despises democrats. Ukraine cannot make any concessions at all because any victory by Russia, no matter how small, would result in the worst case scenario of the population being dragged out and murdered. Putin has said publicly in all clarity that the Ukrainian state and Ukrainian culture have no right to exist in this world.

You have many scholarly contacts in Eastern Europe. Are you in exchange with Ukrainian colleagues and if so, how are they doing?

Our Ukrainian colleagues, such as Anatoly Podolsky from the Ukrainian Center for Holocaust Studies in Kyiv or Leonid Finberg from the Center Judaica of the Mohyla Academy or Josef Zissels, the chairman of the Jewish Federation of Ukraine, are fighting in the capital. In Ukraine, in this respect, the opponents of the Nazis are fighting against the fascist regime in Moscow. All in all, we are in close contact nationally and worldwide so we can help in the best possible coordinated way. In the meantime, refugee colleagues from all parts of Ukraine are also coming together here with us.

You have taken in a Ukrainian poet. Did you know each other beforehand and how can you support her beyond providing accommodations?

Daryna Gladun is staying with me in Berlin at what is currently the temporary end of her flight. The global scholarly community is working closely together here. In this specific case, my colleague Alex Averbuch, from the Canadian University of Alberta, asked me for help. Daryna comes from Butscha, the town next to Irpin, which was almost completely destroyed by the Russian invading army. In our project “European Times,” funded by the German Federal Ministry of Education and Research, which I am conducting together with my colleagues Annette Werberger and Andrii Portnov from the European University at Viadrina, we were able to secure a scholarship for her. It is up to Daryna how she wants to take it from here. She is an excellent literary scholar who is writing her doctoral thesis on performance in contemporary Ukrainian literature. But at 29, she is also one of the country’s best poets. And, she is also a teacher of Ukrainian literature who still takes care of what is left of school through homeschooling. We will support her wherever and however we can.

What do you think members of the University of Potsdam community who want to help can do at the moment?

We welcome every offer to take in a refugee. The longer they can be taken in, the better. In addition, translators and interpreters for Ukrainian - and also Russian - are now urgently needed. Clothing and furniture are often needed after the flight. Medical help is also of great importance. And in general, all leads to concrete job offers are welcome. The federal government has approved immediate entry into the workforce, and with the current status of near full employment, the conditions are very good.

Scholarly relations with Russia have been gradually put on ice since the beginning of the war. What do you think of this - is it right to isolate Russian researchers and students?

Contact with Russian state institutions was completely broken off by the entire scientific alliance in Germany: This alliance includes the German Academic Exchange Service, the Alexander von Humboldt Foundation, the German Rectors’ Conference and all other scientific institutions. I believe this is the right way to build up the maximum possible pressure within Russia to overthrow the authoritarian dictatorship and to protect our own democracies in the West. Of course, persecuted and endangered persons from Belarus and Russia will be helped on an individual basis. But now it is no longer through Russian state institutions.

You had already planned a new “think tank” at the University of Potsdam on Central and Eastern Europe, especially in view of the tense situation in Crimea that has been going on for years. How is the project proceeding now?

Personally, I have always stood for a very broad conception of Slavic studies. We should not only engage in the comparative study of the cultures and literatures in the East Slavic region, i.e. in Ukraine, Belarus and Russia, but also relate them to the West Slavic region, i.e. the Czech, Slovak, Polish and Sorbian cultures, as well as to the South Slavic cultures. In this respect, we will certainly find a way, in these oppressive times of war, to find a good framework for this vital topic.