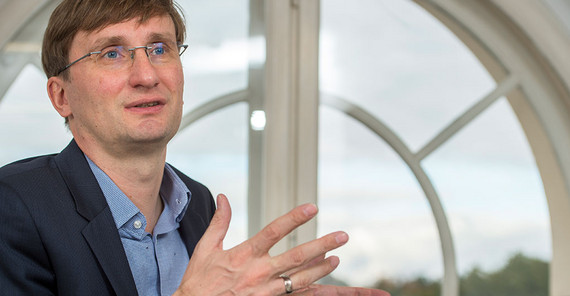 The war in Ukraine is not only taking place in the Donbass, the suburbs of Kiev and other major Ukrainian cities; it is also raging in secret. Long before the first Russian tanks crossed the border into Ukraine, U.S. intelligence agencies warned of a Russian invasion, while on the other side, Russian espionage provided a miscalculation of Ukraine’s defense capabilities. Since then, a wide variety of intelligence agencies have been meddling in this conflict, sometimes more, sometimes less openly. Matthias Zimmermann spoke with military historian Prof. Dr. Sönke Neitzel about the role of the intelligence services in the Ukraine war, the cat-and-mouse game of publishing secret,s and the consequences of failed espionage.

What role are intelligence agencies playing in this conflict?

Intelligence services undoubtedly play a very important role. This starts with the obviously wrong idea the Russian services drew about Ukraine's resilience and extends to the accurate picture the Ukrainians had of the Russian attack. That is why they were able to prepare well and win the battle for Kiev.

The U.S. intelligence agencies have been, and continue to be, unusually transparent about the war in Ukraine. Even in the months leading up to the invasion, they were relatively open about the possibility that such a move might be imminent. And they continue to make public many “findings” or even indications of things that might happen. Why? Is this a new kind of wartime diplomacy?

The publication of intelligence information was an attempt to keep Putin from attacking, along the lines of, “Look, we know what you're up to. Best to leave it alone.”

It is sometimes said that intelligence data and insider information from U.S. intelligence agencies are more valuable than arms deliveries. What is your view on this?

Weapons alone do not win a war. You also have to know how and where to use them. Given all of the information that is leaking out, the support of the Western intelligence services seems to be invaluable for the situational awareness of the Ukrainian armed forces.

Most recently, there were reports that U.S. intelligence had enabled the Ukrainians to carry out the targeted killing of numerous senior Russian military officers as well as the sinking of the “Moscow,” the flagship of the Russian Black Sea Fleet. Is there any truth to this? And if so, wouldn't the U.S. do well to keep this a secret? Won’t they sooner or later become a party to the war, which is to be prevented at all costs?

It is almost a certainty that the American intelligence services are also supplying the Ukrainians with target data. The fact that they admit this, at least through the back door, is no exception in the history of intelligence services. Secret intelligence has rarely been completely secret. In the U.S. and the U.K., in particular, there has been a tendency to divulge secrets in order to gain public approval. However, this does not make the U.S. a party to war, at least as I understand it under international law. However, as a historian, I do not know all the details of the legal situation.

Time and again we read that one of the reasons why the Russian “special military operation” is not going as it should is because of blatant misjudgments or even failures on the part of the Russian intelligence services. Is that so? And if so, what are the reasons?

It is difficult for us to judge. But it is quite obvious that the Russian attack was based on an incorrect assessment of the situation. The question is who made which mistake. Was information not passed on? Was the situation deliberately reinterpreted in an optimistic way to please politicians? Or was there simply too little notice of the Ukrainians’ preparations? The fact that intelligence services also align themselves with the convictions of the political leadership has occurred time and again in history and would be nothing new. One need only think of the situation analysis of British and American intelligence services that Saddam Hussein would have weapons of mass destruction at his disposal.

Some say that, among the few people Putin really trusts, there are many secret service agents, obviously since Putin himself came up through the secret service. Now some ofa his companions are in prison or under house arrest, like Sergei Beseda of the FSB. Is Russia’s best-known intelligence service falling out of favor with the president?

The at least partial failure of the Russian offensive is a humiliation for Putin on the international stage. He will not forgive those he holds responsible.

The BND is traditionally well-positioned in Russian intelligence and also in what we call signal intelligence. The BND thus has the technical means to intercept electronic communications in Russia to a quite comprehensive extent. How it is involved in detail, what information it supplies to Kiev, for example, is not publicly known. But I assume that there is close cooperation between the Ukrainian and German services. There was a reason why Bruni Kahl, the president of the BND, flew to Kiev on February 23 despite internal warnings.