Prohibiting the Truth by Law - Prof. Dr. Christoph Wagner on the Freedom of the Media and the Judiciary in the Russian Federation 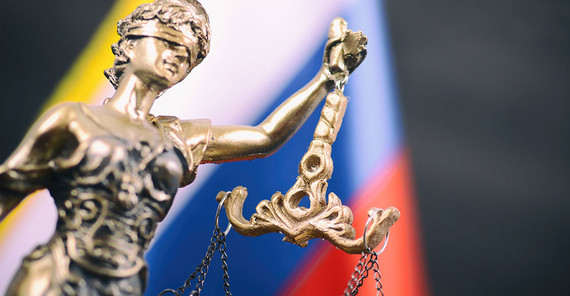 Photo : AdobeStock/Corgarashu
Is justice in Russia not only blindfolded, but also has its hands tied? Honorary professor and lawyer Prof. Dr. Christoph Wagner sees hardly any freedom left for the press and judiciary in Russia.

In May, the non-governmental organization Reporters Without Borders published its 2022 press freedom rankings, which compare the situation for journalists and the media in 180 states and territories. As is well known, press freedom in Russia is not in good shape: While it ranked 150th the year before, the country now ranks 155th. Prof. Dr. Christoph Wagner, Honorary Professor at the Faculty of Law at the University of Potsdam and an attorney, spoke with us about the end of independent reporting in Russia.

Several weeks ago, “public dissemination of intentionally false information about the use of the armed forces of the Russian Federation” became punishable by law. The military invasion of Ukraine is not supposed to be called a war; the political leadership insists on calling it a “special military operation.” Violators face up to 15 years in prison. Is this typical wartime procedure in an autocracy?

What do you think of such legal restrictions on the freedom of the press?

They show that the Kremlin leadership controls all legislative bodies and is not afraid to ban even the truth by law.

For years, newspapers and television stations in Russia have been blocked, banned, or “conformed” to state opinion. In the meantime, even the last remnants of independent Russian media, as well as foreign media such as Deutsche Welle or BBC, are no longer accessible. What power then does independent reporting have? Could such reporting really pose a danger to Putin’s “special operation”?

The restrictive reaction of the Kremlin leadership shows that it fears independent reporting. Whether independent journalists can do much against state media power is doubtful, but without their work, it is almost impossible for critically minded citizens to find objective information.

The social media were spared these repressions for longer. After the war began, first Twitter, then Facebook and Instagram were banned. The court justified the decision by saying that the parent company Meta was extremist. Now only YouTube is accessible, and probably not for much longer. What loopholes might still exist for the public to get independent information?

Social media and intermediaries can be used by anyone in any direction and can also be manipulated. What is more important is the sources and how they are handled. Serious journalists who check facts and verify sources are important. The most significant remaining journalistic medium critical of the Kremlin is the Meduza portal, which today provides news in Russian from Riga for over ten million people in Russia. The website is still accessible, and a block could easily be circumvented with a VPN.

Journalist Marina Ovsyannikova, who protested the war with a poster on Russian television in March 2022, is facing a fine of about 250 euros. In comparison to politician and activist Alexei Navalny, who was the target of a poison attack and is now serving a multi-year sentence in a penal camp, isn’t that a surprisingly lenient approach, especially in wartime?

According to reports, this was only an initial fine; the actual criminal proceedings are still pending.

Do you see any similarities to censorship in China or Belarus in terms of restrictions on press freedoms?

Yes, the media system and the suppression of independent reporting is becoming more and more totalitarian.

The Russian judiciary is not only passing harsh sentences regarding press freedoms. Human rights organizations such as Memorial, which was banned by Russia’s Supreme Court in late 2021, are also affected. How do you assess the independence of Russian courts?

There is no independence of the judiciary there when it comes to politically important proceedings. This has been more or less obvious since the trials of Kremlin opponent Mikhail Khodorkovsky at the beginning of Putin’s rule.

Irina Sherbakova, co-founder of Memorial, said in an interview: “First you create false news, then you start to believe it yourself.” Is that how you see it?

The truth is sometimes even more complex. Several different narratives are often created, some of which contradict each other. This misleads public opinion, and in the end, people no longer know what to believe or how to identify propaganda.

How does (war) propaganda work?

Selective facts are combined with untruths to suggest conclusions that promote one’s own position and/or provoke a mostly emotional reaction against the opponent’s position.

One last question about war reporting. Time and again we hear that possible war crimes committed by the Russian army could not be verified. Why is it so difficult to observe and classify what is happening in Ukraine?

It is said that the first casualty of war is the truth. There are hardly any independent journalists on the front lines, so information is provided by the warring parties, each highlighting their own successes - and, if necessary, the crimes of the enemy.