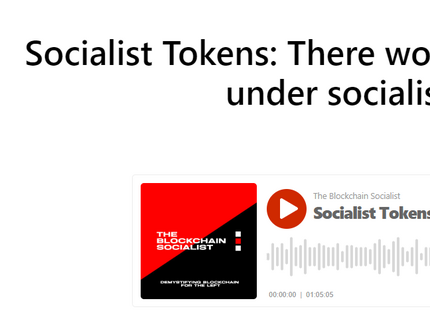 Podcast Episode "Socialist Tokens: There would be no taxes under socialism" with Philipp Dapprich

Dr. Philipp Dapprich was a guest on "The Blockchain Socialist" podcast, which explores the intersection of blockchain and leftist politics. The conversation was about a socialist interest in economic planning and the ideas Jan Philipp Dapprich put forward in this matter in his paper "Tokens make the world go round: socialist tokens as an alternative to money" (2022) on socialist tokens.

Schedule to be announced. 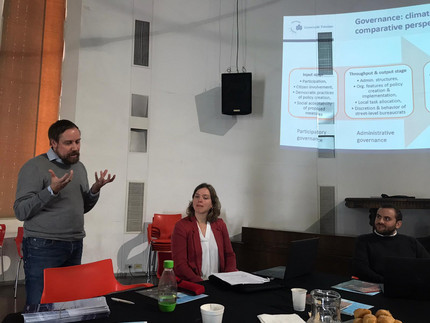 Participatory Structures in the Context of Climate and Urbanization Strategies: C40 in Buenos Aires

From October 18 to 22, the Chair of Political Theory was invited by the Buenos Aires City Council (together with the Chair of Politics, Administration and Organization) to take part in the C40 city program. There we were asked to present first results of our research project on the role of citizen participation on climate strategies in metropolitan regions.

While we were there we were also given the opportunity to visit the urbanization project in Villa 20. In this district of Buenos Aires - which is especially affected by poverty and precariousness - a project team together with the administration and above all the local citizens has launched a concept to rebuild the district and create new perspectives for the residents. The project is not just about building new streets and houses but creating a livable neighbourhood, f.e. by building schools, sanitary facilities or planning facade greenings as a climate adaptation measure. Of particular interest to us was how the organizers succeeded in shaping the participatory process in such a way that the citizens were not only able to express their preferences, but were also able to actively participate in the project themselves and thus identify with it and actually use the existing offerings.

At our partner university Universidad Nacional de San Martín, we were able to present our research project within the framework of the Einstein Climate Change Center of Public Policy and Human Settlement*. Afterwards, we discussed the different criteria for representation within participation processes as well as the objectives of citizen participation with scientists of the university and later with students. On site, we were also able to strengthen our strategic cooperation, for example by planning further cooperation projects with our colleagues from Argentina.

The Ministry of Science, Research and Culture of the State of Brandenburg has selected the seminar "No Refuge - Refugee Rights and Border Regime" initiated and conducted by Dr. Kerstin Reibold as a prize-winning project! The theme of this year's Landes-Lehrpreis is "Social interaction in teaching and learning". The chair is very happy about the award and congratulates Dr. Reibold! The award ceremony and presentation of the certificate by the Minister of Science, Research and Culture will take place on 24th of November.

The seminar "No Refuge - Refugee Rights and Border Regime" dealt with the question of refugee policy from a normative perspective. For this purpose, the book 'No refuge - Ethics and the Global Refugee Crisis' by Serena Parekhs was read and discussed. The book discusses the situation of refugees who do not find safe refuge in refugee camps, in urban slums or on the steady onward journey. It analyzes how the lack of access to asylum creates a second refugee crisis and discusses what moral claims refugees in such situations have to the international community.

The seminar adressed the following questions:

Which moral rights ground refugee rights?
How well are these moral rights protected in the current international system?
What changes would be needed to effectively protect these rights and what are the main (political, moral, economic…) challenges to do so?
Which/ what other moral rights conflict with refugee rights?
(How) Can these rights conflicts be resolved?
Which parts of these questions aim at a normative answer and which ones at an empirical answer?

In the course of the seminar, the students were guided through the process of preparing an independent contribution to a scientific debate. In doing so, the students worked together through the various steps from finding a research question to research work to presenting their own contribution and revising it. The seminar was accompanied by a writing consultation and concluded with a student conference where the students had a direct exchange with researchers working on migration and refugee rights.

Dr. Kerstin Reibold was awarded the 2021 Teaching Prize of the Faculty of Economics and Social Sciences. We are very happy and congratulate her!