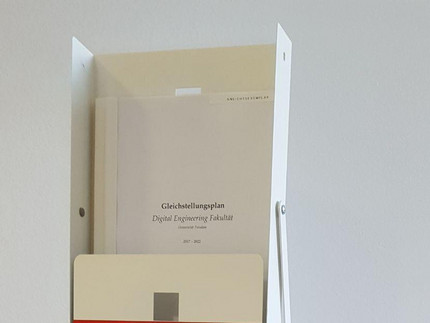 The Gender Equality Plan defines the Faculty's objectives in terms of gender equality work and the actions it wants to take to achieve these objectives. According to Section 7 of the Brandenburg Higher Education Act (BbgHG of April 28, 2014), Section 5 of the State Equality Act (LGG of December 5, 2013) and Section 16 (3) of the Basic Constitution of the University of Potsdam (GrundO of December 17, 2009), the Gender Equality Officers are obliged, in cooperation with the University of Potsdam, to draw up and implement a decentralized equality concept for the Digital Engineering Faculty. The Gender Equality Plan was adopted by the Faculty Council in November 2017 and is valid until the end of 2023. The Gender Equality Plan contains the current proportion of men and women in the various status groups – students, doctoral candidates, post-doctoral candidates, graduate assistants, employees in administrative and technical services, external lecturers and professors – and their evaluation. In addition, it describes the faculty's goals in terms of gender equality and the actions to be taken to implement them. If you have any further questions or comments, please feel free to send us an e-mail!