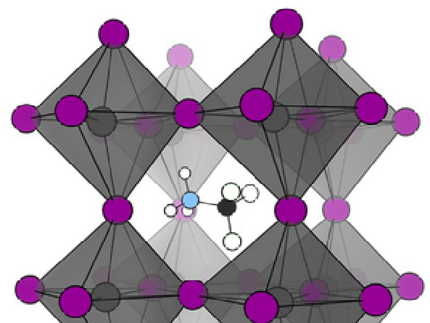 In the veil between organic and inorganic semiconducting materials a hybrid class of organometallic perovskites (generic formula ABX3) has emerged as one of the most promising novel systems for highly efficient photovoltaic applications (world-record: 22.1 %, early 2017). The origins of some of the extraordinary properties (e.g. extremely low loss in open-circuit voltage) of the solar cells along with practical issues (long-term stability) remain to be solved.

Work in our group is focused on revealing kinetic parameters (generation, transport, recombination and extraction) of charge carriers in functioning devices with efficiencies exceeding 20%. In particular we utilize predominantly organic transport layers and study their influence on performance and the above-mentioned parameters. We are also part of a joint graduate school (HyPerCells) between the University of Potsdam, the HU Berlin and the HZB. Here we combine a manifold of techniques to study fundamental properties of the perovskite materials as well as their viability to work in conjunction with commercially available solar cells (e.g. Silicon) in so-called tandem-solar cells.

The work of the group is further devoted to hybrid tandem devices, which combine inorganic and organic subcells with complementary absorption properties. Here, current work focuses on the optimization of the organic cell to perfectly match the requirements for optimum performance of the hybrid tandem device. Optimization of the layer structure guided by optical model led to a hybrid triple junction cell with a power conversion efficiency exceeding 11 %.