For most state of the art organic photovoltaic materials, the generation of charges is independent of electric field, at least at room temperature. Then, the photogenerated current is determined only by the competition between free carrier extraction (characterized by the mobilities of electrons and holes) and their non-geminate recombination (described by the non-geminate recombination coefficient k2). Despite intensive research on organic solar cells over the last two decades, an analytical description of the current voltage (JV-) characteristics of these devices is still not available.

PWM, together with partners in Groningen and Freiburg, has been successful in establishing analytical relations between the fill factor and the parameters describing generation, extraction and recombination of charge. Different figures of merit (FOMs) were introduced to describe the performance of these devices in different working regimes, and an analytical approximation of the JV curves in the limit of low mobilities was derived. The work shows that mobilities in excess of 10-2 cm2/Vs are needed to eliminate transport losses in reasonably thick active layers, but also that the mobility of the slower carrier limits the overall performance. 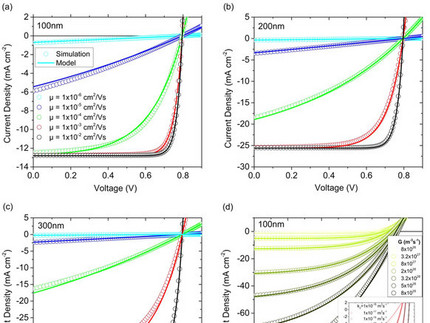 Photo: Scientific Reports 6, 24861 (2016)
Comparison of JV-curves from 1D DD simulations (symbols) and the analytical approximation (lines), highlighting the versatility of the analytical model.

Photo: Scientific Reports 6, 24861 (2016)
Comparison of JV-curves from 1D DD simulations (symbols) and the analytical approximation (lines), highlighting the versatility of the analytical model.

M. Stolterfoht, A. Armin, B. Philippa, D. Neher, “The Role of Space Charge Effects on the Competition between Recombination and Extraction in Solar Cells with Low-Mobility Photoactive Layers”, The Journal of Physical Chemistry Letters7, 4716–4721 (2016), DOI: 10.1021/acs.jpclett.6b02106