On November 11, 2022, the new scholarship holders were officially awarded at the ceremony on the Griebnitzsee campus and their social commitment was honored.

The President of the University of Potsdam, Prof. Oliver Günther, Ph.D., welcomed the 120 guests in the lecture hall on the Griebnitzee campus and acknowledged the special educational biographies of the scholarship recipients: "The university scholarship, which we have set up thanks to our sponsors, enables us to support personalities who have already achieved extraordinary things in their young lives". A particularly high number of applicants this year also points to the tightened financial situation of students, which has been affected by inflation and the energy crisis. Despite the difficult circumstances, the scholarship holders are achieving incredible things in their studies and in their numerous social commitments.

A new perspective. Prof. Dr. Florian Schweigert, Vice President for International Affairs and Fundraising, introduced the new think tank, in which a scientific response to the Ukraine war is being made: "A team of scientific supervisors and scholarship holders of the new think tank "Translating EVROPA" is looking with a magnifying glass at the region of Eastern Europe. The University of Potsdam is one of the few universities in Germany with a distinguished Ukrainian Studies department and, with Prof. Dr. Alexander Wöll and his team, has sought-after experts on Eastern Europe as members of the brand-new think tank."

The two spokespersons of the think tank with a focus on Eastern Europe, Lisa Jarzynski and Evgeniaa Iakovleva, also emphasized the power imbalance between the "West" and the "East" in their speech: "So far, it has been talked about rather than with important actors from the region. The Russian war on Ukraine highlights a major research desideratum." The think tank's goal would be "to explore more closely practical approaches, historical facts, and discourses of colonization in Eastern Europe."

Space for Change. In her closing speech, student Maja Toebs emphasized her personal desire to actively address issues: "I don't want to be one of those who always complain, but have decided to improve the education system from within by becoming a teacher myself." On behalf of all the scholarship holders, she expressly thanked the many donors who support this scholarship and make it possible in the first place. The financial support gives scholarship holders more freedom to work for social and political change.

In the run-up to the award ceremony, the 20-strong selection committee had the challenging task of choosing the most suitable candidates from the 505 applications - no easy task. In addition to academic achievement, motivation, voluntary work and the diverse educational biographies of the young people are particularly important. This year, the group of new scholarship recipients once again reflects the diversity of the entire student body at the University of Potsdam: 65 percent of those selected are women and more than a third come from a non-academic home. About 20 percent are international students and many of the scholarship recipients are (single) parents, students caring for dependents, or have a chronic illness or limitation.

Many thanks to all our supporters for their commitment.

74 particularly high-achieving and committed students at the University of Potsdam will receive a Potsdam University Scholarship this academic year as part of the Deutschlandstipendium program. The scholarship recipients were selected from a field of 550 applications.  In order to celebrate the scholarship recipients, to present you with your certificate and to establish the first contact with your donorss, we offer the annual scholarship celebration in front of the New Palace. But for well-known reasons, the joint celebration of scholarship holders and donors had to take place purely digitally for the first time in November 2020. In addition to the greeting video from the president of the university and words of thanks from Vice President Prof. Schweigert, there were also videos with greetings from the individual donors. Nevertheless, there should be an exchange and networking during the evening, because the university scholarship is not only about financial support. In small groups, scholarship holders and their donors were able to get to know each other virtually in specially set-up video chat rooms. 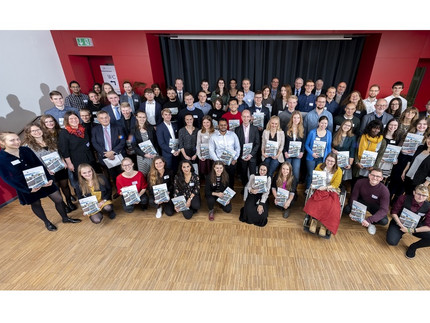 59 particularly high-performing and dedicated students of the University of Potsdam receive a University scholarship during this academic year. The scholarships amounting to 300 euros per month have been handed over at the festive ceremony on the campus Am Neuen Palais. The scholarship holders were selected from a field of 350 applications. "The scholarship holders reflect the diversity of our university," said the Vice President for International Affairs, Alumni and Fundraising, Prof. Dr. Florian Schweigert. About 20 percent of the funded students come from abroad, two-thirds are female. All in all, the students represent 27 study programs and have different social backgrounds.