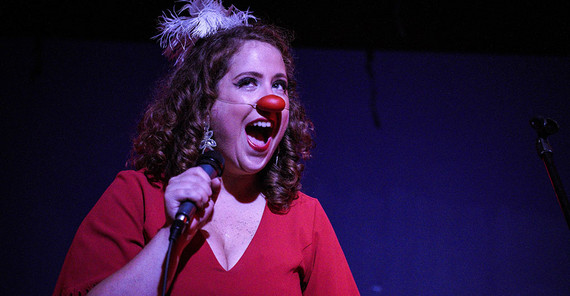 Photo : Daniel Paikov
Dotti Moscati, a Berlin burlesque performer originally from Chicago, has enriched the Berlin scene as a “burlesque clown” since 2017.

A white veil and a red cloth alternately reveal and veil the body of a woman dancing on a stage bathed in blue light. Sometimes as a white wedding dress, sometimes as a baby blanket and finally as a shroud, the fabrics stage the conventional course of a woman’s life - from puberty to adulthood and from the birth of a child to death. But the red and white colors in which the dancer wraps herself are politically charged: They are the national colors of Poland. It is the Polish government’s policy on women and its ban on abortion that Polish burlesque performer Betty Q criticizes in her sensual, humorous show.

Burlesque performances such as this are the subject of Dr. Joanna Staśkiewicz’s post-doctoral (Habilitation) project, “Queering Gender, Desire and Local Myths in (Neo)Burlesque” at the Institute for Arts and Media. She understands this form of stage art as a commentary on political events, and especially with regard to gender issues and sexual orientation. Her project is funded by the German Research Foundation until the end of 2024; an international conference is also planned, even with a live performance.

But what exactly is burlesque? The term comes from the Italian word “burla” for joke or prank. Burlesque theater existed as early as the sixteenth century, staging the vulgar comedy of ordinary life. “It was about laughing at the prevailing culture,” Staśkiewicz explains. Later, burlesque can be found in Mozart, and his own compositions were also parodied. Then, in the 1860s, the first burlesque dancer, the British performer Lydia Thompson, appeared on stage. She used elements of cross-dressing in her shows, dressing in shorts, for example, which was scandalous at the time. “Thompson sparked a burlesque trend in the U.S. with her tour.” The movement reached its peak in the 1930s, when the phenomenon hit Broadway. In 1937, however, the Catholic mayor of New York City banned the art form, and as a result it increasingly faded into the background. While go-go dancing and striptease became popular in the 1960s, burlesque went into hibernation before reawakening in the 1990s: as neo-burlesque, with celebrities such as Dita von Teese, but also an increasingly queer audience in London or New York. “Performers define themselves beyond the dichotomy of gender,” says Staśkiewicz, who therefore likes to speak of “queerlesque.”

According to Staśkiewicz, this form of theater is always subversive and capable of challenging common norms. “Burlesque performances are an upending of the world,” resembling carnival, really, when all conventions are suspended once a year. Over the next two years, Staśkiewicz will visit shows in New Orleans, Berlin and Warsaw - she prefers to be in small, hidden bars - and conduct interviews with the performers. Biographical aspects, such as experiences of discrimination, will also be included in her work.

Every city has its own burlesque community, with a wide variety of myths and themes. In Warsaw, she says, the scene is particularly political. “The performances often denounce the right-wing government, creating queer ‘safe places’,” Staśkiewicz explains. These, he says, are magical places with a do-it-yourself aesthetic where there is no censorship. Burlesque, for example, takes on Christian elements as a style of performance; “Boylesque” performer Gąsiu, for example, satirizes Polish national epics and the homophobic Catholic Church.

The scene in New Orleans is also full of surprises and celebrates the unusual. On the one hand, there is the proximity to voodoo; on the other, sworn fan communities of “Star Wars” or “Harry Potter” come together at “nerdlesque” shows. Performers may take the stage dressed as robots, for example, or as Jedi knights. “The performances are so abstract that they move beyond the gender binary.” The researcher therefore incorporates theories that the grotesquerie of bodies, for example in the form of robotic costumes, tattoos or piercings, undermines norms. But politics is also on the agenda in the U.S., where nerdlesque and likewise clownesque are booming: when rape allegations were made against Judge Brett Kavanaugh under Donald Trump, the artist Lefty Lucy showed herself completely naked, a very rare move in burlesque: An image of vulnerability.
Compared to New Orleans and Warsaw, the Berlin scene is rather confusing, she said. “To describe typical Berlin burlesque is very difficult,” says Staśkiewicz. “It's so international.” What is certain is that it all started in the 2000s with grotesque galas and fetish evenings. The productions usually bring to life the legendary Berlin of the 1920s, the golden age of cabarets, dance halls and revue theaters, an age when travesty shows took place in Schöneberg’s Eldorado and 170 homosexual clubs dominated nightlife, with leading figures like Christopher Isherwood and Claire Waldoff.

In Germany, she says, stagecraft has not yet been researched, although it has long been discussed in English-language literature. Joanna Staśkiewicz came across the research topic herself more by chance than anything else. During her doctoral studies on the Catholic women’s movement in Poland, she had given a lecture in the U.S. and also got to know the city of New Orleans. It was here that she first came into contact with the New Burlesque scene. “To this day, I’m fascinated by how the perfomances playfully, theatrically and at the same time humorously stage patriarchal notions of eroticism.”

This text was published in the university magazine Portal - Eins 2022 „Diversity“ (PDF).