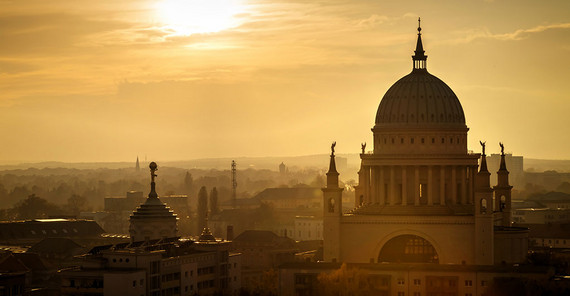 Photo : AdobeStock / Katja Xenikis
Hot summers are no longer an exception in Potsdam.
Heat waves, thunderstorms, hail, and heavy rainfall - extreme weather events are becoming increasingly common. Such events pose an enormous challenge for cities, as they cause severe damage and may also impact people’s health. Environmental researcher Annegret Thieken is investigating how cities can better prepare for such conditions.

It was extremely hot on July 26. While people in the Potsdam district of Drewitz were sweating, weather stations in this garden city measured maximum temperatures of 33.7 - 34.6 degrees Celsius on this summer day in 2019. A few weeks earlier, a team from the University of Potsdam had installed the weather stations in backyards, which are to collect weather data for three years. What makes this special is the fact that the researchers want to compare whether temperatures can be reduced through green backyards. It indeed seems to be a bit cooler in places where beds or patches dominate instead of concrete. The temperatures in green backyards were consistently lower than in those places where plants grew only sparsely. On average, the green backyards were only 0.3 degrees cooler, but depending on the weather and wind conditions the temperatures could actually be up to 2.3 degrees lower.

In the research project “ExTrass”, Prof. Thieken, head of the Geography and Disaster Risk Research group, and her team investigate the health threats of extreme weather events. Their goal is to find out how well cities are prepared for climate change and how to increase their resilience as the frequency and intensity of extreme weather events could further increase in the course of climate change.

Some enjoy it, others suffer: When the thermometer surpasses 30 degrees in summer, it can be uncomfortable or even dangerous for some people. Circulatory problems, nausea, and fever, or even a heat stroke with extremely high body temperature, severe headache, and fainting – all of these can be the result of excessive summer heat. Elderly people and children are particularly sensitive to high temperatures. The staff in day-care centers and nursing homes therefore faces particular challenges when it comes to preparing for heat waves -a task that increasingly poses challenges for such facilities.

Last year, the researchers of the “ExTrass” team surveyed staff at day-care centers and nursing homes, physicians, pharmacists, and the population of the three case studies involved in the project - Potsdam, Remscheid, and Würzburg. The answers provide information on how heat or heavy rain may affect health, how well people are prepared, whether they receive warning messages, and what they do for their own protection.

But first the researchers wanted to know what day-care centers and nursing home managers considered the most severe threats to public health. “Heat waves are clearly number one here,” Prof. Thieken explains the first survey results of the specialist staff. “Of course, you have to see this in connection to the time when the investigation took place in August 2019,” she emphasizes. At the time of the survey, the hot summer of 2019 was at its peak and widely affected people’s everyday lives. Second and third place on the hazard list were particulate matter and possible epidemics from pathogens, followed by heavy rain and floods as well as storms and thunderstorms.

Drinking a lot, providing shade and fresh air, not stressing one’s circulatory system - these are the most important precautionary health protection measures in high temperatures. Care facilities such as nursing homes and doctor’s practices are quite well prepared for this, says Thieken. There is often sufficient sun protection through roofs or sun shade sails and also air conditioning. “We see the greatest need for action in day-care centers for children.” The staff there felt comparatively poorly prepared. “For example, there are no clear rules on when a day-care center may close due to heat,” Thieken explains. This uncertainty puts additional strain on staff.

Together with Johanniter-Unfall-Hilfe, a practice partner in the project, the Potsdam research team is working on recommendations for action based on the survey and interview data.
These are intended to better prepare staff in these facilities for extreme heat events. Climate and heat maps can show the areas and buildings that are particularly affected by heat waves - for example because there are no cooling green spaces nearby or because dense building development impedes air exchange. It is also important that warnings of excessive heat reach staff in time. “This could be done directly by the city administration, for example, who passes heat warnings on to the facilities,” Thieken describes a possible link in the warning chain that could lead to improved management of health-threatening weather conditions.

Water playgrounds, sun shade sails, fans, light meals or façade greening are all helpful tools for day-care centers to make it through a hot day. They are already part of the recommendations for action that the researchers and Johanniter-Unfall-Hilfe are now refining and also want to test in workshops for their practical suitability. The researchers will also scientifically accompany the implementation of these measures in the facilities. “At the moment, however, it is difficult to precisely plan the process,” says Thieken. Another catastrophe is getting in the way of the researchers: the Covid 19 pandemic is shaking up their plans. Workshops cannot take place, care facilities may not be visited, and the staff has reached its limit.

Nevertheless, project manager Thieken hopes to be able to provide viable and practical recommendations for action in about a year. Impressive data show the significance of prevention: In summer 2003, about 70,000 people died across Europe due to heat. And one thing is certain: The next heat wave will definitely come.

Prof. Annegret Thieken studied geo-ecology at Technische Universität Braunschweig and environmental sciences at the University of Amsterdam. Since 2011, she has been head of the working group Geography and Disaster Risk Research of the University of Potsdam.
Mail: thiekenuuni-potsdampde

Environmental scientists of the project ExTrass (urban resilience against extreme weather events) research how large and medium-sized cities can increase their resilience against climate change. They identify best practices as well as factors that promote and inhibit urban climate adaptation.