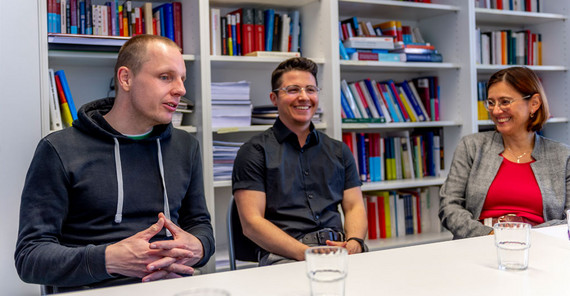 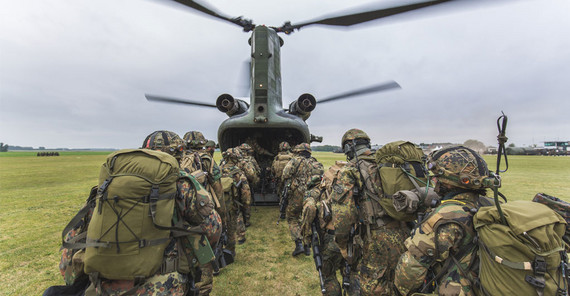 Photo : Tobias Hopfgarten
Prof. Maja Apelt und her team
Photo : AdobeStock/Photoshooter
Does equal treatment work in the Bundeswehr and other "male alliances"?
In 2006, when the General Anti-Discrimination Act came into effect in Germany, all stakeholders were well aware that discrimination based on ethnic background, gender, religion, or sexual identity would not disappear overnight. Therefore, concrete rules and procedures were required to enforce equal treatment. Moreover, people and groups were needed who are motivated enough to institute court proceedings against cases of discrimination, if necessary. So the resulting legal and social practice can no longer be attributed to the wording of the law alone.

Researchers at the Chair of Organizational and Administrative Sociology at the University of Potsdam are studying how equal treatment law is implemented, and also what the respective rules and procedures are based on. Titled “Organization and Law – political interest groups and legal interventions”, the project has been part of the research group “Law – Gender – Collectivity”, funded by the German Research Foundation since 2018.

To the researchers, the Bundeswehr as a male-dominated organization is of particular interest as the General Anti-Discrimination Act was transposed into a specific act on the equal treatment of servicemen and women. Besides, the Bundeswehr promotes diversity within its ranks also with a view to enhancing its public reputation. Non-discrimination commissioners promote fairness, and all branches of the military have discovered family friendliness and equality as strong arguments for potential applicants. Thus, with its diversity strategy, the Bundeswehr presents itself at recruiting fairs as a progressive employer.

Non-discrimination in the Bundeswehr

It remains an open question to what extent equal treatment has become part and parcel of everyday life in the barracks and in military operations. After all, it was not long ago that women and trans people had no or very limited access to military service, while gay soldiers were seen as a “security risk” and excluded from service. By now, the non-discrimination and equal treatment of gay, lesbian, bisexual, trans and queer soldiers are actively pursued, also in an attempt to enhance the attractiveness of the Bundeswehr as a modern employer for young talent. “The transformation began when the Bundeswehr opened its ranks to women in 2001,” explains Prof. Dr. Maja Apelt, who did research in a previous project on “organization and gender using the example of the military”.

Apelt is Professor of Organizational and Administrative Sociology at the University of Potsdam and supervises the sub-project “Organization and Law”. “The impetus for the overarching research group came from Prof. Dr. Susanne Baer who is a jurist at Humboldt-Universität zu Berlin and judge at the Federal Constitutional Court. When Baer was awarded the Caroline von Humboldt Professorship in December 2012, she decided to invest the prize money in the development of an interdisciplinary research project on the connection between law, gender, and collectivity. It focuses on legal mobilization – the way people assert their rights, thus making society more aware of them,” Apelt explains. Moreover, jurists, historians, ethnologists, and sociologists research how gender norms and relations change, and what the role of groups, associations, and other organizations in this process is. It was Apelt’s idea to focus on organizations. The submitted research application convinced the German Research Foundation, and in mid-2018 the research team could take up its work.

“In our sub-project we investigate how the Bundeswehr is utilizing, for instance, non-discrimination law to present itself as a modern employer,” says Dr. Henrik Dosdall who wrote his doctoral thesis on the crisis dynamics of financial markets and now works as a researcher at the University of Potsdam. “How are family friendliness and gender diversity used to raise the profile of the armed forces? What is said about who the Bundeswehr needs today – muscle men or IT specialists? And what interests affect the answers? In other words: What has changed since women have been allowed to serve in the army in 2001? What is the effect of diversified collectives in male-dominated occupational fields? Here, we want to highlight a major development and look at how the Bundeswehr deals with rights – also in view of the completely different situation on the labor market today.”

Transition and career in the military

Ray Trautwein, another member of the DFG research group, focuses on trans soldiers and asks exemplarily: “What happens when a ‘man’ joins the army, but later feels like a woman and comes out as such? How will the transition affect their career? What regulations apply in the army, and how are they accepted?” For his PhD project, Trautwein will primarily conduct interviews in which personal or even sensitive experiences will come up. “The comparative perspective could also be quite interesting,” Trautwein adds. “Are the problems trans people face in the Bundeswehr similar to those of the first female soldiers? What are the similarities? What is different?” Trautwein plans to do his doctorate cumulatively, i.e. he will not submit a monograph, but several papers. In addition to trans soldiers, Trautwein intends to interview trans police officers about their coming out and transitioning experiences to introduce another level of comparison into his research.

“For male and female soldiers who transition, there are fixed rules in the Bundeswehr,” project head Apelt underlines. “For instance, all medical costs are covered. The aim is to retain or restore their fitness for action and reduce potentially accompanying mental impairments. But we ask: What are the concrete experiences of those transitioning? Where do frictions with the male, heteronormatively dominated structures occur? Who accompanies transitioning?” For Apelt, this is an interesting mélange from which she hopes to get new insights – also to establish gender studies as a central category in organizational sociology.

From her past experience Apelt got to know the Bundeswehr as an approachable training institution, and close contacts have been established to its affiliated institute of social sciences. Hence she expects “fruitful discussions that take both the army and the researchers a big step forward.”

Prof. Dr. Maja Apelt studied sociology in Berlin. Since 2010, she has been Professor of Organizational and Administrative Sociology at the University of Potsdam. Since 2018, she has also been head of the sub-project “Organization and Law – political interest groups and legal interventions” in the research group “Law – Gender – Collectivity” funded by the German Research Foundation.
Mail: maja.apeltuuni-potsdampde

Ray Trautwein studied sociology and gender studies at the University of Konstanz and Humboldt Universität zu Berlin. He has been a research assistant in the DFG project and doing his doctorate on coming out and transitioning processes in organizations since 2018.
Mail: trautweinuuni-potsdampde

“Organization and Law” is one of six sub-projects of the research group “Law – Gender – Collectivity” funded by the German Research Foundation since January 2018. The sub-project examines the connection between organization and law through the example of equality and anti-discrimination legislation in all-male organizations like the Bundeswehr from an organizational and sociological perspective.