"Each virus develops its own survival strategies" – biochemist Prof. Katja Hanack on the difficulties involved in developing vaccines against viruses 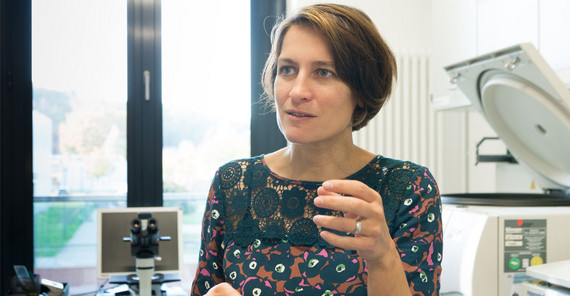 Photo : Karla Fritze
Prof. Dr. Katja Hanack in the laboratory.
In just a few weeks, the corona virus SARS-CoV-2 has spread around the world from Wuhan in China. Wherever there are people, there is also the coronavirus. While all affected countries are trying to curb its further spread with a variety of measures, the search for effective means of treating COVID-19, the lung disease caused by the virus, and above all for a vaccine against the virus, is in full swing. Katja Hanack, Professor of Immunotechnology at the University of Potsdam, talks about the spread of the virus, the time-consuming development of a vaccine and the lessons to be learned from the pandemic.

Less than three months after its discovery, a microscopic virus has brought the world to a standstill. As recently as January, few would have predicted this. Why is that?

Each virus develops its own survival strategies, including the way it is transmitted/infects new hosts. SARS-CoV-2 is relatively easy to transmit because it first settles in the throat and is then transmitted by coughing/droplets.
The symptoms themselves also cannot be distinguished from a mild cold, which is a common occurrence during the winter months. With an incubation period of three to 14 days, it is difficult to characterize the precise progression of the disease. That is why the number of unreported cases of infection is estimated to be much higher. The infection is problematic in people with previous conditions and a weakened immune system. The world was not prepared for this outbreak, and it is straining the healthcare systems beyond their capacities, which has led to many deaths. The progression of a pandemic can be traced very well through media analysis – in other words, you can see how the virus spreads through transport routes etc. and ultimately affects the entire world. In the meantime, many new facts about the virus itself and its transmission have also been discovered, which helps contain the spread. It is a race, but especially with regard to immune responses the fact is that the infection occurs first and the immune system can then react. It has very effective means of doing this.

Which is easier – the search for a specific therapy or a vaccine?

Neither is easy, but it is good to see that these developments have been in full swing since January and that gives people hope that something will soon be found for both approaches. In a vaccine, parts of the virus, for example only the outer layer, are often used to vaccinate. In this way, the immune system builds up an effective defence reaction and if an infection occurs with the real pathogen, the immune system can react without delay. However, there are two important points in vaccine development – the vaccine must be effective, i.e. it must be able to trigger a virus-specific immune response, and it must be safe. This is why vaccine developement takes so long – it is subject to important safety regulations due to its use in humans. There are pathogens for which vaccine development has been attempted for more than 30 years, but unfortunately has not been achieved so far (e.g. malaria or hepatitis C). This is unique to each pathogen.

There are currently various estimates of how long it will take to make a vaccine available. Every possible scenario between six and 18 months has been put forward. What do you consider to be realistic? And why is it taking so long?

In order for vaccines to be administered to humans, there are, as I said, considerable safety requirements that must be met. Usually the development is carried out in the laboratory. Subsequently, in vitro tests are carried out using cell cultures before toxicity and efficacy studies in the animal model follow. Only then can one consider using the vaccine on the first risk groups. In my view, 18 months is realistic. The regulatory authorities can weaken the regulations in case of a particular risk and fast track things to shorten the delays. That will certainly happen in this case too. But it is not only the development of a suitable vaccine that takes time; its subsequent production must also be carried out according to specified standards – and depending on capacity, the production of batches can take a quite a long time.

You are doing research in the field of immunotechnology. How does research on such a vaccine work?

We do not develop vaccines ourselves, but in general you need information about the structure of the virus and its strategy to infect cells and replicate in the cells. Normally, the immune system has very effective recognition mechanisms to fight viruses, but unfortunately the immune system can only develop these specific defence reactions after an infection. Therefore, humans fall ill with the first infection, but are then usually protected from further infections with the same pathogen due to these processes. Vaccination helps us to prepare for this process and thus to have specific protective measures available immediately in case of a real infection. For the development of new vaccines it is important to know how the virus enters the body, which cells it attacks and at what point in time it destroys the host cell in order to spread further. Various strategies can be developed at these stages, which must then of course be tested for effectiveness. As described above, this is at first done in a cell culture model and later in an animal model before it can be used in humans.

According to reports, possible vaccines against SARS-CoV-2 work differently from the vaccines commonly used to date. In what way?

As far as I know, there are three different ways to develop vaccines.
1) The use of so-called vector viruses as live vaccines, i.e. harmless viruses that cannot cause infections in humans are taken and prepared with SARS-CoV-2 specific surface structures to make the immune system believe that it is the real virus.
2) Using dead vaccines, i.e. using viral proteins from SARS-CoV-2 that are no longer able to assemble into a virus, thereby inducing a specific immune response.
3) Using gene-based vaccines. In this case the genes of the virus – in the case of SARS-CoV-2 the RNA, as it is an RNA virus – are used as a vaccine. In the body this information is absorbed by somatic cells and the virus proteins are produced by the cells themselves. Since they are foreign, the immune system reacts accordingly. This strategy is currently being pursued by the company CureVac, for example. The advantage here is that the production of the vaccine doses is simpler and quicker than for 1) and 2), but no gene-based vaccine has yet been approved.
Currently, all three strategies are being employed in the development of a vaccine. At the moment, there are 48 ongoing vaccine projects on this topic.

In your opinion, is it possible to learn from such a pandemic? If so, what?

Yes, just like the immune system, society can learn a lot from this development. In the past, there have repeatedly been pandemics caused by influenza viruses (swine flu, bird flu, Hong Kong flu and also the SARS infections in 2002/03). These have been relatively well contained. What is special about the current pandemic is the high transmissibility of the virus and the resulting rapid global spread. This experience should be integrated into existing pandemic plans. It also reveals weaknesses in the healthcare system and in the supply chain with basic necessities such as protective equipment, face masks and disinfectants. And finally, scenarios can be assessed as to how the spread of the virus can be prevented globally and, indeed, jointly. Learning from this and optimizing it in the future is, in my view, a very positive aspect. There will also be many learning opportunities for research.  In particular, the speedy development of vaccines and drugs can be tested in this case and the experiences gained can be evaluated later. New technologies can be used to adapt and optimize these processes so that we can react faster in the future.  A crisis such as the current one relentlessly exposes existing weaknesses – and at the same time reveals ways to counter them.

Is it possible to prevent something like this from happening again?

Maybe not prevent, but in any case reduce. On the one hand, it is important to explain where this virus comes from (transmission from wild animals to humans, as far as I know). In this case it is also necessary to inform people about such possibilities, so that they can adapt their behavior accordingly. On the other hand, regarding the handling of pandemics and their containment: Recent experiences should help us develop an adapted strategy to reduce the delays and problems that have been encountered. Of course, improvements can also be expected from targeted research, for example in the development of drugs and vaccines. In nature, pathogens will always evolve or adapt and change their strategy for infection, so we will have to adapt to this as well.

Animal ecologists in the home office – What can be done when researchers cannot experiment? "People are called upon to support each other" - Social scientist Prof. Dr. Roland Verwiebe on the corona pandemic