"People are called upon to support each other" - Social scientist Prof. Dr. Roland Verwiebe on the corona pandemic 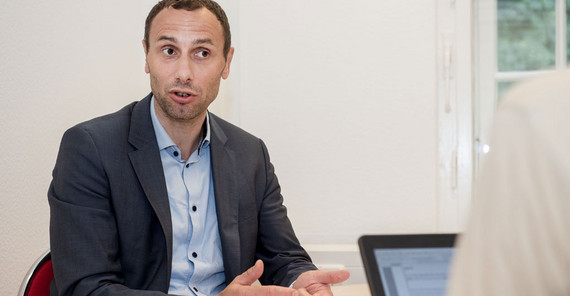 Photo : Kaya Neutzer
Interview with Prof. Dr. Roland Verwiebe
It might seem as if health crises such as the current corona pandemic spared no one. Yet, the existential threat posed by job loss and financial losses, but also the burden of childcare and loneliness, hit some people much harder than others. Prof. Dr. Roland Verwiebe, Professor for Inequality Research and Social Stratification Analysis at the University of Potsdam, describes the effects on socially disadvantaged people.

Mr. Verwiebe, the social consequences of the coronavirus are enormous with entire livelihoods at stake due to the restrictions to economic and interpersonal activities. Who is particularly affected by the crisis from a societal perspective?

The current crisis reminds me personally of the period just before and after reunification, when millions of people in East Germany and the eastern European states became unemployed in a very short timeframe. At the same time, many aspects of life were reorganized completely during that period including administration, local public transport, the question of what people consume and how, the relationship between the generations and how families can and should function in times of crisis. We are currently seeing all this again. It might even help Germany that we can still remember the transformation shock of the 1990s. At the moment, for example, the economy is receiving much more support than was the case back then. But of course the trigger is quite different, now it's a global health crisis and at the time it was the collapse of the German Socialist Unity Party’s regime.

- families with children, especially single parents. For the latter it is very difficult or impossible to take care of children and work at the same time in a factory, the administration or in the home office.

- Old people in residential homes and at home, who already have and in the coming weeks and months will continue to have little or no social contact with their families. This is extremely difficult for these people, because the health of the very old depends to a very large extent on social interaction. This is not being addressed enough at the moment. All we are told is that we must not endanger the group. But that is not enough. Great Britain even recommends self-isolation for those over 70.  I think that's disastrous.

- Small businesses and the self-employed are threatened in their economic existence across the board. But larger companies could also run into difficulties soon because supply chains and sales markets collapse. This affects all sectors, from food service, hotels, airlines, trade, construction, industry and skilled crafts and trades. All German car manufacturers have closed their factories in Germany. That is just one example.

- The ones that are privileged positively are those employees who may be able to work from home and the civil servants in public administration.

You are an expert on social inequalities. What role do they play in crises?

So far, we have been seeing reason, mutual consideration and solidarity among very, very many people in Germany. Quite a sense of calm given the scale of the crisis. There are media reports to the contrary, which in my view are exaggerated. There are no reports about the millions of people who are trying to do their best to do their part. I don’t understand that.
The extent to which the crisis exacerbates social inequalities depends on several factors: For how long will normal social and economic processes be severely disrupted – are we talking about three weeks or five months? How many people will stay healthy? How well will families be able to use their savings to cope with these disruptions? And to what extent are the measures of the federal and state governments working? How effective are they and what will ultimately reach the citizens and affected companies?

What is going to happen next?

The situation of the socially disadvantaged may continue to deteriorate; think of homeless people, those on welfare, refugees, etc. I consider the situation of working single parents to be particularly problematic. The closure of schools and childcare facilities hits them very hard. This group should be given special support. These people should be supported financially and socially, by social workers, but also neighbors, friends and acquaintances can help. The state cannot provide everything. People are currently also called upon to support each other. In view of the contact ban which the Federal Government has issued, this is an urgent necessity at the moment. In the end, much, especially the social situation of people, depends on whether the measures taken are effective, whether the hospitals can continue to work and whether sufficient medical equipment and corona tests, which are currently lacking, remain available.

"Each virus develops its own survival strategies" – biochemist Prof. Katja Hanack on the difficulties involved in developing vaccines against viruses Loss of control and unpredictability – Prof. Dr. Barbara Krahé on the psychosocial consequences of the corona pandemic