„This volume presents an innovative picture of the ancient Mediterranean world. Approaching poverty as a multifaceted condition, it examines how different groups were affected by the lack of access to symbolic, cultural and social – as well as economic – capital.

Collecting a wide range of studies by an international team of experts, it presents a diverse and complex analysis of life in antiquity, from the archaic to the late antique period. The sections on Greece, Rome, and Late Antiquity offer in-depth studies of ancient life, integrating analysis of socio-economic dynamics and cultural and discursive strategies that shaped this crucial element of ancient (and modern) societies. Themes like social cohesion and control, exclusion, gender, agency, and identity are explored through the combination of archaeological, epigraphic, and literary evidence, presenting a rich panorama of Greco-Roman societies and a stimulating collection of new approaches and methodologies for their understanding. The book offers a comprehensive view of the ancient world, analysing different social groups – from wealthy elites to poor peasants and the destitute – and their interactions, in contexts as diverse as Classical Athens and Sparta, imperial Rome, and the late antique towns of Egypt and North Africa.

Poverty in Ancient Greece and Rome: Discourses and Realities is a valuable resource for students and scholars of ancient history, classical literature, and archaeology. In addition, topics covered in the book are of interest to social scientists, scholars of religion, and historians working on poverty and social history in other periods.“ 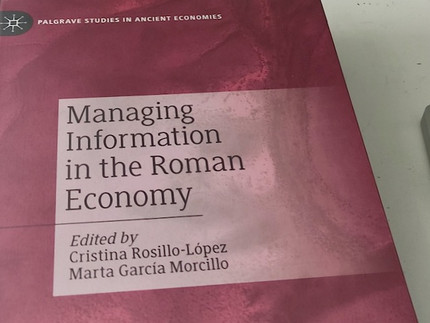 Private or hidden knowledge is an economic concept often encapsulated by the idea ‘I know something that you don’t know’; the opposite would thus be information that is ‘publicly observable’. Informational asymmetry is not only a frequent phenomenon in market activities, but is a distinguishing trait of human relationships, and can be identified in numerous parts of our daily life. Roman authors expressed and articulated collective and individual concerns and solutions to issues affecting information in economic transactions. The creation of innovative institutions aimed to improve and regulate economic performance. Some recorded legal requirements and enforcement instruments partially contributed to compensate for the uncertainties generated by business opportunities and by the unequal access to information that disadvantaged certain economic actors against others, and that were, accordingly, a source of transaction costs. These forms of state intervention reflected complex interactions between the public and the private sphere. The present collective volume aims to deepen our understanding of the Roman Economy by identifying and dissecting the information systems, networks and dynamics that both enabled and conditioned business and financial relationships. The study of knowledge as an economic source, but also as an instrument of power, invites us to evaluate economic activities within a larger collective mental, social and political framework. The book builds upon and is greatly indebted to previous scholarly research on economic theory, specifically from the field of the economics of information, as well as from New Institutional Economics, which have significantly impacted recent studies on the Ancient Economy.