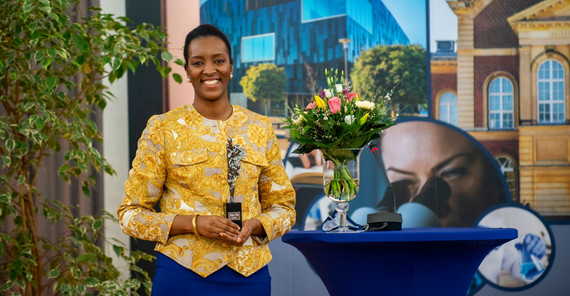 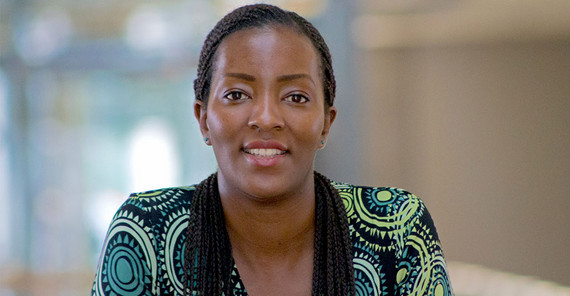 Photo : Tobias Hopfgarten
Voltaire Prize recipient Elisabeth Kaneza
Photo : Anja Pütz
Elisabeth Kaneza
This year, the University of Potsdam awarded the “Voltaire Prize for Tolerance, International Understanding, and Respect for Differences” for the fifth time. The prize, which is endowed with 5,000 euros, goes to Elisabeth Kaneza, a political and legal scientist of Rwandan descent. With its decision, the jury honors a researcher and human rights activist whose dissertation examines structural racism and the legal situation of Black people in Germany. The award was presented on January 13, during the University of Potsdam’s New Year’s Reception.

This year’s laureate, Elisabeth Kaneza, fled to Germany from Rwanda with her family at the age of six and is currently working on a doctorate at the intersection between law and political science on the topic of “racial discrimination”. Kaneza looks at the prohibition of discrimination, which is anchored in international as well as European law and in the German Basic Law. It prohibits discrimination based on “race”. Despite this prohibition, racist discrimination continues to exist. As early as 2013, she founded the Kaneza Initiative, with the aim of actively shaping social change and contributing to the promotion of human rights and diversity. Three years later, the initiative became a registered nonprofit association: the Kaneza Foundation for Dialogue and Empowerment e.V. “I know few doctoral candidates who not only initiated but also institutionalized such an initiative at such a young age”, Prof. Dr. Christoph Markschies said in his laudation for the honoree.

The Voltaire Prize is funded by the Friede Springer Foundation and has been awarded once a year since 2017 to a scholar who has shown commitment to freedom of research and teaching and to the right to freedom of expression. “The selection process of the past few years has shown in how many countries freedom of research and teaching is at risk or does not exist (anymore),” said the President of the University of Potsdam, Prof. Oliver Günther, Ph.D. The jury also includes Vice President Prof. Dr. Florian Schweigert, climate impact researcher Prof. Dr. Hans-Joachim Schellnhuber, Humboldt expert Prof. Dr. Ottmar Ette and church historian Prof. Dr. Christoph Markschies.

Previous laureates are Turkish political scientist Dr. Hilal Alkan, who denounced the war in the Kurdish territories and the actions of the security forces against civilians and subsequently lost her job; Guatemalan sociologist Dr. Gladys Tzul Tzul, who is committed to indigenous peoples in Central America; and the Afghan philosopher Ahmad Milad Karimi for his professional dedication as a mediator between cultures. In 2020, the prize was awarded to media and IT law expert Gábor Polyák. He received the Voltaire Prize for his tireless commitment to the freedom of the press and media in Hungary.