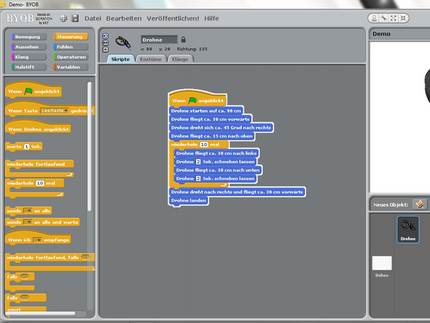 Today, the teaching of basic programming techniques is part of most computer trainings at german schools. Some child-oriented IDEs allow teachers to abstract from deep programming details and focus on the basic essential programming concepts. ScratchDrone makes modern quadrocopters available as execution hardware for simple visual programs. Students are given the opportunity to carry out their own programs directly on a quadrocopters and thus to control them. The popular visual IDE Scratch is used for student's programs as it is already broadly used in classrooms.

The didactic scenario of ScratchDrone is a gradual introduction to programming in several successive phases. Depending on the prior knowledge of the students, an adaptation by the reduction or extension of individual stages is recommended. As a further possibility of adapting, ecen the target object is interchangeable. Thus, robots or other physical systems  may be used for individual experiments.

consulting hours
Appointments can be made via e-mail.