Gift or Bribery? – Corruption In the Ancient World, “Twisted Transfers” and What We Can Learn From Them Today 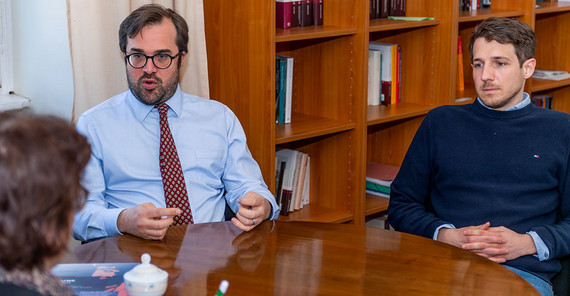 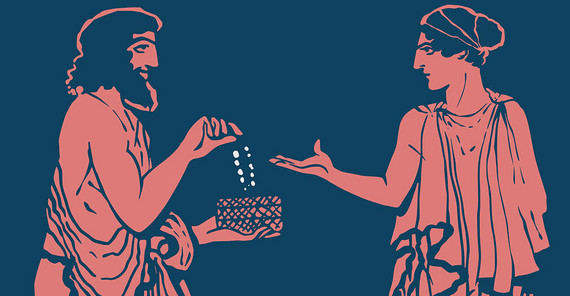 Photo : Tobias Hopfgarten
Prof. Filippo Carlà-Uhink and Niklas Engel
Image : Michael Fetzer
Corruption in Greek mythology: Polynices gives Eriphyle the necklace of Harmonia so that she might persuade her husband to join the war of the Seven against Thebes.

When former German Federal President Christian Wulff was forced to resign in 2012 following allegations of corruption, the debate, as always in such cases, came to a boil: Are people with political responsibilities allowed to accept gifts? If so, from whom? Is anything expected in return? Where is the line to bribery? The German-British project “Twisted Transfers” tries to clarify this issue and looks far back into the past: to ancient Greek and Roman history.

Filippo Carlà-Uhink calls the term corruption “ambiguous,” although its Latin origin – “corruptio” – unmistakably expresses what is meant: ruin, decay, decline! Not everything that is commonly perceived as corrupt, however, breaks applicable law. Actually, illegal actions are quite socially acceptable in certain circles. “Corruption can be assessed politically, morally, and legally. There is no uniform definition,” says Carlà-Uhink, Professor of Ancient History at the University of Potsdam, who spent many years studying the interpretation of gifts in ancient times. A problem usually arises, whenever the giver and the receiver are not on the same level of power. In order to be able to accurately distinguish between gifts and corruption, he is currently spending more time on the analysis of such transfers, which are perceived as “wrong” or “twisted.” He is not doing this work alone, but in a joint project with the University of Roehampton.

The German-British team approaches so-called “Twisted Transfers” by way of discursive constructions. This means disengaging from current and past understandings of law and examining how “corrupt behavior” was talked about in ancient political, cultural, and economic contexts. Which normative values shaped social life? What was considered the ideal of proper behavior? What was socially accepted and what was not? The field of research ranges from the courts in classical Athens to the ethics of Byzantine diplomacy, which can be extensively researched thanks to relatively extensive and well-preserved sources. In the end, outlined case studies are intended to help us understand why and how these transfers could be portrayed as “twisted” and thus as acts of corruption - and they are still portrayed that way today.

Prof. Carlà-Uhink gives an example: the criminal proceedings against Gaius Verres, who was governor of the province of Sicily from 73 to 71 BC. Taking advantage of his position of power, he forced the inhabitants of Sicily to give him gifts and sell works of art that they actually did not want to dispose of. At least that is what the indictment says, formulated by none other than Marcus Tullius Cicero. Verres stated in his defense that he had paid for the works of art. “A classic ‘twisted transfer’,” says Carlà-Uhink, whose project focuses on analyzing trial speeches. He is interested in how discourses about such twists developed or were deliberately used in court. The strategy of making twisted transfers appear as legitimate and normal forms of exchange, which was practiced even then, did not work in the case of Gaius Verres. Under the overwhelming amount of evidence, he surrendered his case prematurely and fled into exile. There, however, he did not live in poverty because instead of the 40 million sesterces demanded by Cicero, he had to pay only three million as compensation.

Only “small gifts” are permitted

Just as today, it was already forbidden for politicians in ancient Rome to accept gifts. Only small gifts were allowed, “but nobody had defined what ‘small’ meant,” says Carlà-Uhink, explaining that public figures needed such “wiggle room” to present themselves as honest people. “If the law defines everything, you can’t perform,” the historian says, laughing. “The fact that it was all a matter of interpretation also helped in constructing concepts of the enemy,” he says. “It’s always the others who are corrupt. We make gifts, the others bribe!”

What we understand by corruption today was definitely seriously discussed at the time, says Niklas Engel, who is writing his doctorate in the project. “You can also call it a search for the ideal: What is a good, a proper transfer?” In his doctoral thesis, the historian focuses on the late Roman Republic and the early imperial period. He draws on the extensive collection of Cicero’s and Plinius’s letters, which provide profound and detailed insight into the everyday social and political life of their time. Engel compares descriptions of corruption and bribery in these letters with other historical sources to find out whether they correspond to a norm or are merely individually constructed. If these norms did exist, Engel wants to examine how they changed during the crisis-ridden transition from the late republic to the early imperial era. He is primarily interested in the question to what extent the structural conditions for the perception of corruption existed in ancient Rome and assess Roman society and its social complexity based on what may have been described as “corrupt.”

“Which is not to say that the Romans did not have an understanding of corruption yet,” says PhD student Engel. As a prominent example, he cites the scandal surrounding Publius Clodius in 62 B.C. Dressed in women’s clothing, he had gained entry to an all-female cult celebration for the fertility goddess Bona Dea at the home of Caesar’s wife, allegedly to meet with his mistress. The affair was discovered and Clodius was taken to court for adultery and religious sacrilege. When the acquittal was made, Cicero accused him of bribing the judges with gifts and buying the verdict with the arrangement of sexual services. “That could be deemed corruption even then,” says Engel. “And did not remain without consequences,” adds Prof. Carlà-Uhink. Two years later, a law was proposed to prohibit judges from accepting gifts.

From Enlightenment back to ancient historical sources

“We are much more formal today. There are clear laws according to which you are convicted if you have crossed a line,” says Prof. Carlà-Uhink, not without pointing out the beginning of this development. “Many terms we use today are based on the Enlightenment. Its representatives, however, didn’t do any empirical research themselves but read the works of antiquity.” The source material has therefore remained the same and with it the importance of ancient history for a better understanding of the present.
However, in order to bring completely different perspectives and thus additional inspiration into the research project, Carlà-Uhink and his colleague in Roehampton, Marta Garcia Morcillo, organize workshops with contributions from other fields: A British criminologist lectured on state capture, elected politicians who create laws to maintain their own power. An ethnologist from Basel reported on a long-term study of corruption in Africa, showing its dependence on economic and political change. A contemporary historian from Amsterdam spoke about corruption and how it was fought in the 20th century. “We not only read ancient sources and historical works, but always modern reports and literature from other subjects to discuss in the group what the reading does for our own research,” Engel says. A total of eleven topics are being worked on in the project, which also deal with prostitution, tax and inheritance fraud – profound, complex, and highly explosive even after more than 2,000 years. The fact that it remains difficult to untangle twisted transfers and avoid hasty judgments is also evident in the case of Christian Wulff, who was acquitted in court of the accusation of accepting  benefits in 2014.

Twisted Transfers: Discursive Constructions of Corruption in Ancient Greece and Rome, Ancient History – Research Project at the University of Potsdam and the University of Roehampton
Duration: 2020–2023
Funding: As part of the DFG/AHRC-Program “UK-German Collaborative Research in the Humanities”