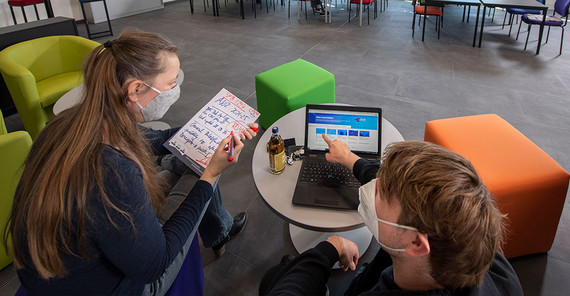 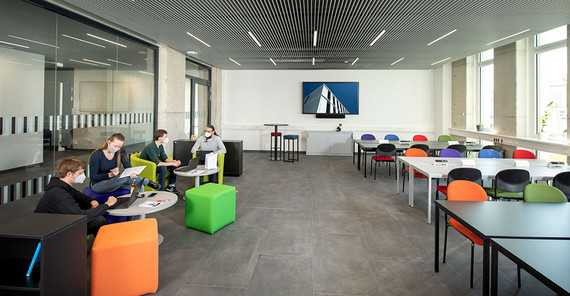 “It is the biggest and most demanding project that I have ever done,” says Ulrike Lucke, leans back into her office chair, and blows a strand of hair away from her forehead. It's evening in Golm, and there’s hardly any light left in the new computer science building. Shortly after moving in, Professor Lucke launched the development of a prototype of a new, national education platform here in spring 2021. It’s an IT infrastructure that will do nothing less than link various digital services and educational offers so that they can be used across the board and throughout Germany – from primary school to university and far beyond. “We don’t want to invent anything in addition but rather integrate what already exists,” she says, describing the plan. Due to the digitization needs during the pandemic, educational institutions have developed different approaches, the professor says. “There’s no way to standardize that. We don’t want to impose anything, either,” she asserts. “Rather, we are offering a kind of platter, on which the particular menu can be arranged according to the particular needs.”

Of course, Ulrike Lucke can’t accomplish such a task alone, but she is pulling the strings: In the project “Bildungsraum digital,” or BIRD for short, the University of Potsdam is in charge of coordination. Other project partners are Technische Universität Berlin, Gesellschaft für wissenschaftliche Datenverarbeitung Göttingen, and Otto von Guericke University Magdeburg. The German Academic Exchange Service (DAAD) and a number of social and economic players are also participating in the mammoth project, which is being funded by the German Federal Ministry of Education and Research with about 7.3 million euros over the course of two years.

One platform – for lifelong digital learning

The expectations of the German government are high. The pandemic has mercilessly exposed the digital wasteland in German education. The makers of BIRD must therefore get an overview very quickly. They must integrate existing platforms and digital teaching offerings via middleware and establish common standards. The aim is to create a virtual space that facilitates access to education in all phases of lifelong learning, whether through institutions or on individual paths. “We've proven that we can do this,” says Lucke. Her team had built a prototype even before applying for the project. “Over Christmas, because time was tight. And then everything happened very quickly. In spring, we were awarded the contract.”

While the professor is talking – quickly and in a low voice – she has long moved to the edge of her chair again and explains with her hands what the Potsdam project group is currently doing. She imagines corner points, draws connecting lines, intersections, docking points. All of a sudden it becomes clear what “complex multimedia application architectures” mean, which are being designed at Lucke’s chair of the same name. Like on a drawing board, the plan of that digital space is being developed, in which walls, building blocks, and design elements form a meaningful whole. The development team works together with the e-learning experts and media didactics in the university-wide Center for Teacher Training and Educational Research. The experts from ZIM, the Center for Information Technology and Media Management, look after the technical operations. The project group has now expanded to 20 people in Potsdam alone.

Lucke knows that the interplay of different subject cultures and competencies is essential, for example, when a content idea needs to be translated into program code or a digital concept needs to be implemented in the classroom. “The problem often starts with the terminology. Transparency, for example, generally means being able to see through something. In our case, however, it sometimes means making something invisible to the user,” the computer scientist explains, pleased that BIRD is also being promoted by the “Bündnis für Bildung” (Alliance for Education). The Germany-wide association of publishers, IT companies, and public institutions supports the digital transformation in teaching and learning and plays an important intermediary role in the project. The players want to open up the “educational landscape of closed silos” and see BIRD as an opportunity to make the multitude of existing as well as future learning opportunities generally accessible.

Connectivity seems to be a key word in the project: to other systems, to software and services that will only exist in the future, and to platforms abroad. “With the DAAD on board, we ensure that the national education space will be internationally compatible,” Lucke also emphasizes. For the European Digital UniverCity (EDUC), led by the University of Potsdam, this is of essential importance. After all, the aim is to conduct research and study together “freely accessible” across several European borders. It is not without reason that the project repeatedly refers to “educational journeys”. Journeys through fields of knowledge, into the depths of individual subjects or to neighboring disciplines. Expeditions into virtual worlds, educational trips to foreign countries, with all that this implies: encounters, discussions, and intercultural exchange, the certificate of a language course or a degree from a university. BIRD wants to pave the way and bridge gaps so that the “educational journey” of each individual becomes successful without disruptions, self-determined, and ideally life-long.

The developer team recently showed what such a user journey can look like on the digital “terrain” of the education platform with a live demonstration at the Federal Chancellery. “We knew that Mrs. Merkel cared a lot about the project, so we were highly motivated,” Professor Lucke reports. Even though the former chancellor could not be there in person, the presentation created a lot of tailwind and the certainty of being on the right track, she says. With a specially written script and actors from the university, they acted out exemplary learning scenarios at school, university, and continuing education live in the system.

A video that accompanies trainee teacher Stefanie Schubert on her educational path between seminars, teaching practice, and continuing education also offers an impression of this: Using her unique account, she gains access to the platform, connects to the school cloud, and conducts a biology sample lesson in an 11th grade via the Big Blue Button conferencing system. During the lesson, she accesses digital material that illustrates the subject matter, interacts with the students and, at the same time, uses the networked DAAD portal to inform them about a language aptitude test they need for a planned stay abroad. Needless to say, her subject supervisors have also been in touch and have not only given her feedback on the teaching sample, but also a grade via the examination board, which Stefanie collects in her personally managed “data wallet”, a digital folder. The trainee teacher shares the recorded lesson with her fellow students in a virtual workspace and receives helpful comments. Her teaching sample appears to be a success, since Stefanie attaches it to an application that she sends to her “dream school”. Because her supervisors have recommended that she furthers her knowledge on digital teaching formats, she takes an e-learning course. Her successfully completed online examination fills another verified certificate of her “data wallet” that will accompany her during her lifelong learning – always at hand.

Her example shows what will be possible when the technical backbone for the digital education space is ready. Professor Lucke also sees BIRD as an incubator and experimental space for testing technical possibilities for the education of future generations. Therefore, further prototypes based on open-source software are to follow. “Step by step, features are built around it, new rooms are added,” says the “architect” of complex multimedia applications, “until the whole building is complete and serves its purpose.”

The project „Bildungsraum Digital“ (BIRD) focuses on creating a federated infrastructure for digital education in Germany. To this end, previously isolated educational platforms and individual educational services are to be networked while preserving existing heterogeneity, and at the same time broad interoperability. The aim is to create an ecosystem of independent educational services that offer users support in the course of their education and promote the formation of individual learning paths.