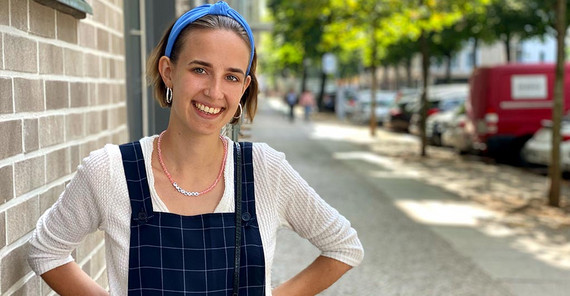 A young woman hops off an e-scooter near a busy shopping street in Berlin. Around her neck she wears a necklace with the inscription "feminist." She quickly uses the scooter app, and then Helene Shani Braun has time for a cappuccino. The 24-year-old is not only a feminist; she is also on her way to becoming a female rabbi. This will make her one of the few women in Germany to date to assume the spiritual office.

"It's my last interview for the time being," Braun tells us. Starting in the fall of 2021, the student will spend two semesters at a Talmud school in Jerusalem. In the past few months, she has already gained plenty of experience with the press: "Spiegel" magazine predicted a future for her as Germany's youngest female rabbi, she explained to "RBB" what being queer actually means, and on "Deutschlandfunk" she talked about why the question of the gender of God was so intriguing.

She actually began her studies in Jewish Theology at the University of Potsdam and her training as a rabbi at the Abraham Geiger College at 21, the minimum age required. She is now in her seventh semester. In truth, she is in no particular hurry to complete her bachelor's degree. "I don't make it a point to become the youngest female rabbi in Germany. I have respect for the office and want to feel ready for it," she says.

Braun is also advised on dealing with the press at the School of Jewish Theology. But she is almost a media expert herself: with her own website and Instagram channel, but also an "online course on the fundamentals of Judaism," in which she talks to interested individuals about everything that might be important in Jewish life: from Jewish scriptures to customs, commemorations, holidays, and dietary laws. "Initially, I wanted to reach people who are Jewish but didn't grow up with the traditions and now miss that aspect." In the meantime, however, there are also non-Jewish participants. The course also helps her to consolidate her own knowledge and to train her ability as a public speaker – which will benefit her rabbinical training.
At Abraham Geiger College, Braun learns about the practical aspects of the profession:  planning worship services, principles of preaching, and spiritual guidance. "Shadowing plays a big role; we imitate the rituals and gestures and internalize them that way." In an internship at a Göttingen congregation, she led worship services and practiced all the details of the process. How does the congregation celebrate holidays like Yom Kippur or Rosh Hashanah? Role-playing was used to also learn about spiritual guidance as an important factor in spiritual work. As part of her studies in Jewish Theology at the University of Potsdam, she reads theological texts and learns Hebrew and Aramaic. There is also room for highly topical issues: Last semester, she gave a presentation on transsexuality in Judaism – gender issues are Helene Braun's specialty.

"I am all about equal rights for all people. Anyone should be able to come to a synagogue regardless of sex and gender." In 2018, Braun co-founded the association Keshet, meaning "rainbow" in Hebrew, which aims to make queer Jewish life visible. The association is not only active at the parades on Christopher Street Day. For example, members held a service at the Oranienburger Strasse synagogue in Berlin, in which the sermon was all about gender diversity. "To be honest, synagogues are usually not too crowded on Friday nights. That night, however, 120 people came to the synagogue."
Incidentally, the congregation on Oranienburger Strasse also has a female rabbi – Gesa S. Ederberg, one of five women in Germany who are heads of Jewish congregations. The first woman in the world to be ordained was Berlin-based Regina Jonas in 1935. Nine years later, she was murdered in Auschwitz. It took more than 60 years before a woman was ordained again in Germany in 2010: Alina Treiger, also a graduate of the Abraham Geiger College. The College has ordained seven female rabbis to date and inducted three female cantors. And Helene Braun will follow at some point.
She says her mother introduced her to the Jewish faith. "Mom took me to the synagogue, taught me the customs and the history. "When she was a teenager, she attended the community's youth center. "While many teenagers lose interest in congregational life, I've always enjoyed being there." Not only did she find her best friend there, she also enjoyed the program, the games, and the celebrations. She later became a youth leader there. "My hope is that I can draw from my background in youth work and, as a young rabbi, have no inhibitions about simply going to play a game with the teenagers."

As the head of a congregation, she would also like to introduce Keshet to its young people, of course. The 24-year-old also faces headwinds from time to time as a public figure. Especially online, she sometimes has to put up with stupid or even hostile comments. "I don't look at them myself, but have friends screen them for me." Helene Braun is nevertheless aware of the privilege of being able to navigate in very open, liberal religious circles in a big city like Berlin. The situation can be quite different in small towns, she says. "If there's only one congregation nearby and it's just not welcoming, believers from an LGBTQIA+ background have a hard time."