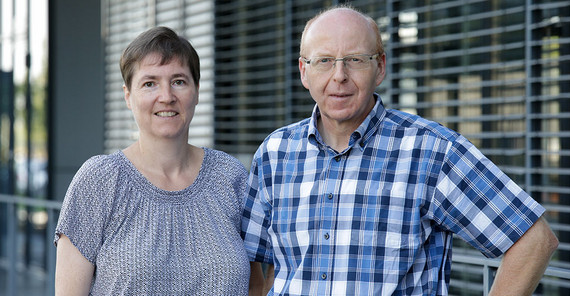 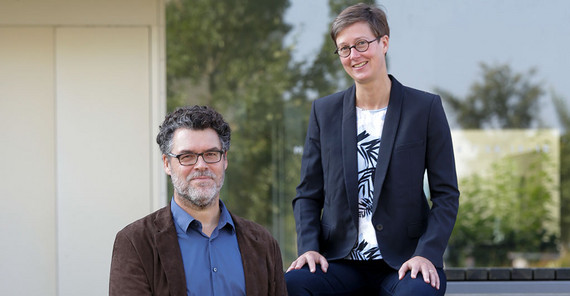 Many academics have a partner who is just as well-trained as they are. However, these dual career couples can find it difficult to find two jobs in the same country, the same city, or even at the same academic or research institution. Two academic couples tell us how they found their way to the University of Potsdam.

For more than twenty years, Karoline Wiesner and Thorsten Wagener had almost exclusively been working abroad. The physicist and the hydrologist met in Bristol, where they both worked at the university. After years spent abroad, however, thoughts of returning to Germany intensified. “We were looking for an employer that would be a good fit for our research fields and also offer a good living environment,” Wagener says. “Potsdam was our first choice.” Both had come to Potsdam in 2018 for a sabbatical year; Wagener to the University of Potsdam, Wiesner to the Potsdam Institute for Climate Impact Research (PIK). While hydrology in Potsdam was an attractive option for Wagener, Wiesner hoped to work in her field, the study of complex systems, in Germany.

She succeeded in doing so, thanks to the dedication of the university management: Karoline Wiesner has been working as Professor of Complexity Science since April 2021, a position that was created specifically for her. “There has never been a professorship like this in Germany before – it’s very exciting.” Thorsten Wagener had already started his Humboldt Professorship for the analysis of hydrological systems at the University of Potsdam a few months earlier. Climate, which can be viewed as a complex system, is a point of intersection in the couple’s research. There will be opportunities for joint projects both as part of the collaboration with PIK and at the center for water research that Wagener is currently setting up.

They both know how lucky they are. “Women in dual career couples often give up their academic jobs because it’s very difficult in Germany to land two academic positions in the same place,” Wiesner says. “In physics, for example, an estimated 80 percent of female scientists also have a partner who is an academic. This greatly increases the likelihood that women in academia will face dual career issues.” This could only change if the proportion of female professors was increased, she adds. In Sweden, where the physicist worked for a long time, much more had been done for women in academia and thus also for couples. “Academic couples also have it easier in the U.S.,” Wagener reports. In his time at the University of Pennsylvania, it was even an advantage if the partner was already employed at the university. This is because there was dedicated funding for Dual Academic Couples there and faculties were able to expand easily as a result, Wagener adds. In Germany, on the other hand, a professorship would first have to be made available by the federal state, and this second position would then also have to be financed – a major hurdle, according to Wagener. The couple agrees that “two qualified partners should be an advantage, not a disadvantage, for the universities.”

What it means to have a weekend marriage is something Jolanda Hermanns and Bernd Schmidt know all too well. The couple had met while studying chemistry, and later both earned doctorates and published scientific articles together. Hermanns decided to take up teacher training again and ended up working as a secondary school teacher in North Rhine-Westphalia. When Bernd Schmidt received his offer for a professorship at the University of Potsdam in 2006, the two of them saw each other only on weekends for more than two years. “In 2007, we realized that we wanted to put an end to this commute and make Potsdam the center of our lives,” says the Professor of Synthetic Organic Chemistry.

Jolanda Hermanns was now looking for a school in Potsdam with her combination of subjects – chemistry, physics, and music. “The Dual Career Service did not exist yet,” they both recount. “Our problem at the time really raised awareness of the issue with the university management.” After a teacher exchange procedure was unsuccessful, the university management intervened in the case, which led to Hermanns getting a job as a secondary school teacher at the Voltaire Comprehensive School. In 2015, she joined the university and has since been the overall coordinator of the PSI-Potsdam project (Quality Initiative for Teacher Education) at the Center for Teacher Training and Education Research (ZeLB). Here, the didactics specialist recently initiated the ALL-MINT project to facilitate exchanges between academic staff involved in subject-specific teaching in STEM subjects for teaching degree students. At the same time, she is working on her postdoctoral qualification (habilitation) in the didactics of chemistry. Worries about the future have not yet been eliminated: “I hope I can stay at the university after the second phase of the project ends in two years,” Hermanns says.

Since they both work at the Golm campus, they always take their breaks together. “You will often find us in my husband’s office, drinking tea,” Hermanns says. The two usually talk about work during these breaks. His wife’s didactic expertise has helped the chemist understand many of the problems that students have, especially at the beginning – in the past, he had not given much thought to the psychological processes involved in learning chemistry. “Not everyone who is fresh out of high school understands the very abstract language of formulas on which chemistry is based. Thanks to my wife, I now take a much more fundamental approach.”

Is it possible to reconcile partnership and career in academia today? “The difficulty, of course, is to aim for higher-level positions, because those are few and far between in Germany,” Schmidt says. “That makes it all the more important to have respect for each other’s academic ambitions.”

For roughly ten years, the Dual Career Service has been supporting the partners of professors who are currently in appointment negotiations or discussions about remaining in office at the University of Potsdam.  It offers guidance for the job search, advice on continuing education and qualification programs, and information for parents on child care and schools in the region.