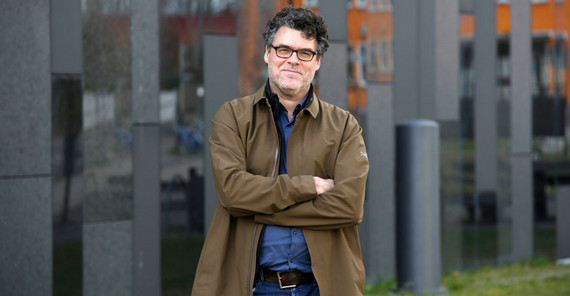 Photo : Sandra Scholz
Hydrologist Prof. Dr. Thorsten Wagener joined the University of Potsdam as a Humboldt Professor at the beginning of 2021.

“Back to familiar things after an absence of 25 years” – this is how he feels about returning to Germany after many years abroad, says Prof. Thorsten Wagener. On January 1, 2021, the researcher started the Alexander von Humboldt Professorship for the Analysis of Hydrological Systems at the Institute of Environmental Science and Geography. Since then, however, he has actually only been on Golm campus for a few days due to Corona. He describes his new start from his home office as follows, “It’s a bit weird to get to know your new colleagues this way, and you don’t really learn the ropes at the university. That’s why I meet with staff members outside for a walk when the weather is good.”

Wagener came to the topic of water during a stay abroad in Ethiopia while studying civil engineering at the University of Siegen. After completing his master's degree at Delft University of Technology (Netherlands), he was a PhD student at Imperial College in London for a few years before going to the University of Arizona as a postdoctoral fellow in 2002 on a DAAD research grant. In 2004, he accepted a position as Assistant Professor at Pennsylvania State University, where he specialized in hydrologic systems analysis and simulation, and became Associate Professor in 2009. From 2012 - 2020, Wagener was Professor of Water and Environmental Engineering and head of the research group Water and Environmental Engineering at the University of Bristol (Great Britain).

Last year, Wagener was appointed a Humboldt Professorship at the University of Potsdam. The professorship, endowed with 3.5 million euros, is awarded by the Alexander von Humboldt Foundation and funded by the German Federal Ministry of Education and Research. After Harald Clahsen in the cognitive sciences, he is the second Humboldt Professor at the University of Potsdam to receive Germany’s highest endowed science award.

Wagener’s major goal at the University of Potsdam is to establish a research center for water, environment, and society. To be able to achieve this, he wants to enhance interdisciplinary research and work across institutes. “This water center will bring together people from different departments of the university and also involve the associated research institutes. We want to take Potsdam even further when it comes to water research, both nationally and internationally,” he says.

A new research complex, building 32, was built on Golm campus, which will accommodate Wagener and his research group by the end of 2021. Among other things, high-performance computers will be installed there because Wagener's work focuses on mathematical models for predicting hydrological processes. “How sensitive are regions to weather extremes? How do changes in precipitation and temperature affect groundwater regeneration? How does the impact of dry periods differ over long distances? These are the kinds of questions we want to investigate with our research group,” he says. “We then want to have an even more comprehensive and interdisciplinary look at these questions in the water center than is possible for individual researchers.”

With computer simulations, he and his team hope to understand how climate change – from local to global scales – affects weather extremes such as droughts and flooding. “Here, our goal is also to find out which uncertainties there are in these modelings, where and for what periods they are robust or  need improvement," Wagener explains.

During his stays in the UK and the US, Wagener became familiar with different approaches to scientific work as well as the training and mentoring of doctoral students and postdocs. “I want to change old behavior patterns and see how experiences from different countries can be combined,” he says. “Through the water center, we want to communicate the state of scientific knowledge in order to identify and use interfaces between researchers inside and outside the University of Potsdam and the users of our research.” A Twitter account has already been set up for this direct communication.
Wagener will teach a course on environmental modeling in the new master's degree program Climate, Earth, Water, Sustainability, which will start in the winter semester of 2021/22. He has a number of plans to raise the profile of junior researchers. “I usually prepare a multi-year career plan with my postdocs for the time until their next appointment. I have also started to compile online materials for doctoral training. This includes, for example, tools and methods for scholarly work and writing. In my time at Bristol, I taught this content in a workshop every year.”

Much room for cooperation

Wagener sees connecting factors of water research, for example, in the life sciences and medicine but also methodologically in computer science, mathematics, and physics. He already contributed to the establishment of environmental institutes and led large multidisciplinary research projects at the University of Bristol and the Pennsylvania State University. Numerous collaborations, for example through joint research proposals, are planned with extramural research institutions such as the Potsdam Institute for Climate Impact Research, the Helmholtz Center for Environmental Research Leipzig, and the German Research Center for Geosciences Potsdam. Even establishing a collaborative research center is being discussed – in any case, there is certainly great potential for cooperation in water research.