Interview with: Sven Dinklage – Working as the UP’s Liason Officer in Brazil 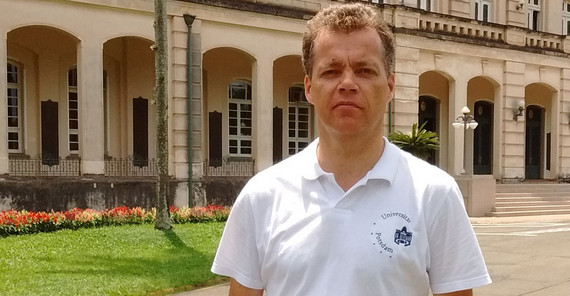 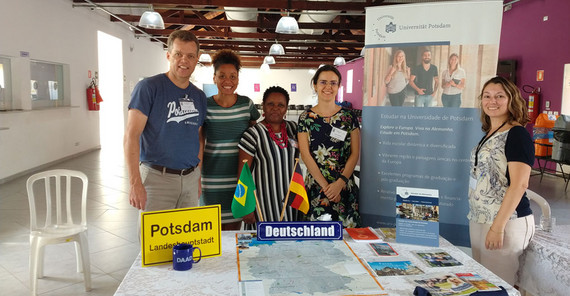 Source: privat
Sven Dinklage
Source: privat
Group photo at the booth – ESALQ
Since 2012, the University of Potsdam has been expanding its academic relations with Brazil, especially with the universities of the state of São Paulo. Sven Dinklage is on site as a representative of the University of Potsdam. He supports students and researchers with regard to collaboration projects in the country and cultivates contacts with Brazilian partner institutions.

“Liaison Officer of the University of Potsdam in Brazil” – is your job as exciting as it sounds, or more down-to-earth?

(laughs) It really is a complicated title, but you could also just say “representative”. It is quite exciting, especially considering the prestige that is associated with the title. Working for a German university is really special in Brazil, and we Germans generally have a very good reputation here. On the other hand, Potsdam is not a well-known city among Brazilians and the job sometimes becomes very down-to-earth when you have to set up the booth at a trade fair, talk to a very diverse audience, or explain your mission in detail on the phone.

The Liaison Offices are meant to build bridges between Potsdam students and partner institutions abroad. How does your support help us achieve this?

We are here on site, speak the local language, know the culture, and can establish contacts with the appropriate parties. We assist students, visitors, and interns and also provide support at events. For those in Potsdam who may not have heard of me, a first phone call or video call could certainly provide more clarity when considering possibilities of cooperation or exchange. And this goes both ways, of course, meaning that I also advise Latin Americans, whether it's about a collaboration or studying at the UP.

How did you become the “Representative of the University of Potsdam” in Brazil?

It’s quite a curious story: In 2013, I accompanied a delegation from the University of Potsdam on a visit to a coffee fazenda near here. A couple of weeks later, I was asked to fill the position. Since I already owned my own training company, Flexpert Ltda. at that time, which supports companies through leadership development, intercultural trainings, and coaching, I was generally available. I had to think about it at first, because the activities were very different from one another, but it also seemed like an interesting task. In the meantime, we have improved our performance here, and have steadily expanded our presence. In the past year, we were able to increase the level of awareness of the UP in the country considerably. For me, it is a great honor to work for the university abroad. I have a great relationship with my colleagues at the International Office in Potsdam and the prospects for the next few years are very good. Once a year, my colleague Verena Kurz, who represents the university in Argentina, and I come to Potsdam to, among other things, present the cooperation with Brazil at the “International Day”, to discuss projects, to promote the cooperation with Latin America, and to get some training.

Can you give us some examples from the field, where a concrete new connection with a research institution in Brazil was established successfully?

At the Center for Teacher Training and Education Research (ZeLB), cooperation with the Faculty of Teacher Education of the USP-Universidade de São Paulo, Brazil's most famous university, is in its initial stage. There has already been a visit from the ZeLB here on site, and a corresponding working paper is currently being prepared. Currently, Brazilian lecturers and researchers are more interested in Germany than German scientists are in Brazil. This may be due to geographical distance or language barriers, but it is certainly also due to the Bolsonaro government’s cuts in funding for education and research. I would like to take the opportunity to note that the reality here is by far not as bad as the reporting about it suggests. In general, I really like to liaise between interested parties and my Brazilian colleagues, because Brazil offers many things that can complement the German research and study landscape, in the natural sciences, geography, and climate research, but also in many other subject areas.

How does someone like you, an Oldenburg native, end up overseas?

Like many others, I started to show interest in living abroad after participating in an exchange program at a high school in the US. This later led to a Master’s degree in European Management at ESCP Europe in Oxford, Madrid, and Paris after completing an intermediate diploma in business administration at the University of Würzburg. Immediately after graduating in 1997, I applied for jobs in Brazil. I had done an internship there and I liked the country and the people. I started my first job at Robert Bosch GmbH, where I worked for almost ten years. I married a Brazilian woman whose grandfather had immigrated from Germany in the 1930s. Our son is now 18 and has been studying for a year at Unicamp, which is quite fitting as it happens to be one of our partner universities. Since I have been living abroad for almost 25 years now, 23 of them in Brazil, I am especially happy to be able to maintain a connection “back home” also thanks to my work at the University of Potsdam.

What exactly does your job in Brazil look like?

I share an office with a fellow consultant in the city center of Campinas, where I work for both the UP and my company. I work for the Liaison Office for about one day a week, but lately it has been more and the hours are spread out over the week, of course. Under normal circumstances, I would also regularly attend events at German schools abroad, at the Goethe Institute, or DAAD, and at least once a month at the German Center for Research and Innovation (DWIH) in São Paulo, where the University of Potsdam is one of the main supporters and, with my help, is involved in projects, strategic decisions, and events. In the past year, however, I too have had to switch to 100 percent remote work, and we have launched a monthly online meeting to promote studying and research projects at or with the UP among the Brazilian public. These virtual office hours are a huge success – at each meeting, we have an average of over 70 people from all over Brazil, more than half of whom attend for the first time. To complement this, we have set up a showcase page on LinkedIn, and the ZIM has designed a logo for us. The number of applicants from Brazil has been increasing significantly!

Your direct contacts work for the International Office of the University of Potsdam. Are you also in contact with other divisions, faculties, or other representatives of the UP abroad and what does that look like exactly?

As part of the International Office, we basically act as its extended branch, but we also have more and more contacts with the faculties and researchers who have been cooperating with Brazil for a longer time. Over time, and also thanks to the Brazilians working in Potsdam, relationships have also been developing with other areas such as ZeLB, HPI, Potsdam Transfer, or the geosciences. As I mentioned, I work very closely with my colleague Verena Kurz in Buenos Aires to cover regional aspects in Latin America. All other regions of the world are currently the direct responsibility of the Potsdam International Office.

How do the German and Brazilian scientific landscapes differ?

The scientific landscape in Brazil is certainly characterized by a greater disparity and more inequalities than the German one. There are very large differences in the quality of teaching between public and private schools, and this carries over into university teaching. In addition, research and academia have suffered from very vast cost-cutting measures in recent years, which have also been felt by the funding institutions. We hope that with a shift in policy, this trend will change for the better in the future. In general, however, the UP’s decision to focus on university partnerships with the Universidade Estadual de Campinas (UNICAMP) and the Universidade de São Paulo (USP) – arguably the two best-known (national) universities in Brazil – was absolutely right.

How do you assess the handling of COVID-19 in Brazil – to what extent do universities and companies succeed in perceiving the situation as an opportunity?

Considering the size of the country and its population, the political situation, and the local culture – the sociability, physical proximity, and rather relaxed approach to rules – Brazil is actually still coping relatively well with the COVID crisis. With regard to universities, only a few have been very efficient in the transition to digital learning, but fortunately our partners are among them. In general, education has suffered massively, especially in public schools. Of course, there are also very large regional differences in Brazil and, above all, social inequalities – the latter have unfortunately most likely become even greater as a result of COVID.

What challenges do you see for the future?

We still have lots of opportunities for cooperation with Brazil, in total there are about 300 public universities in the country. Many ideas can certainly be initiated together with German and multinational companies as well; the potential is practically unlimited. However, you need to have a rather long-term perspective in Brazil – things sometimes take a little longer. But in the end, it will also be worth the investment of time and resources.

Sven Dinklage
Liaison-Officer of the University of Potsdam in Brazil

Mr. Dinklage would be happy to assist any scholars with an interest in cooperation projects with Brazil. You could also promote degree programs or scientific projects at the UP to a Brazilian audience as a guest in the (online) office hours as well as via the LinkedIn page of the Liaison Office.