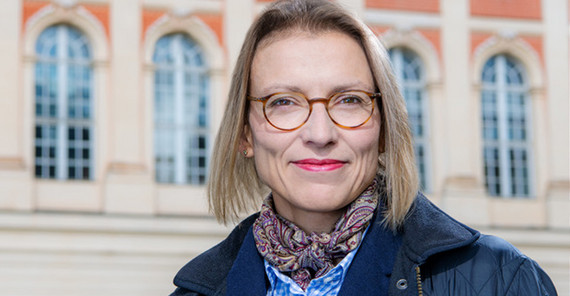 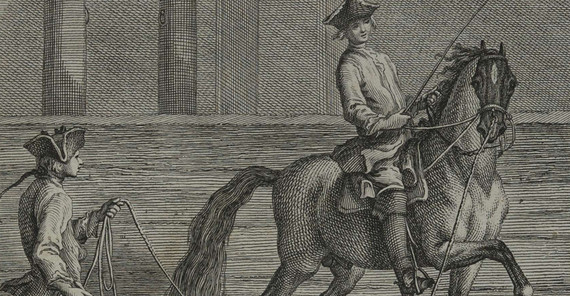 Photo : Ernst Kaczynski
Prof. Dr. Stefanie Stockhorst
Photo : Ridinger, Johann Elias: Vorstellung und Beschreibung derer Schul und Campagne Pferden
Illustration from Johann Elias Ridinger's “Vorstellung und Beschreibung derer Schul und Campagne Pferden nach ihren Lectionen” (Presentation and Description of Trained and Campaign Horses and their Lectures) (1760)
“The style of riding hints at the style of government – by force or by skill,” they said in the early modern period. Only those who could master a horse were seen as proper rulers. For that matter, how did young princes learn to ride? How did they manage to handle horses almost perfectly within a short period of time? Were there special textbooks, lessons, or both? Starting with these questions, Prof. Dr. Stefanie Stockhorst of the University of Potsdam analyzed books on horsemanship from the 16th to the 18th century. By and by, she uncovered the exciting story of knowledge transfer in horsemanship, but also of parallel developments in art theory and social dynamics at the time in general.

“At the beginning, I just planned for a thin book with beautiful pictures,” says Stockhorst who is a passionate rider herself and owns an Icelandic horse. But then it turned out that the significance of the topic reached much deeper: “The corpus made me realize how comprehensive the subject was – almost the entire cultural history of the early modern period is reflected in the horsemanship of the time.” Eventually, she wrote a 360-page book – “Ars Equitandi. A Cultural History of Horsemanship in the Early Modern Period” – which was published in the summer of 2020.

Apart from impressively illustrated everyday texts, the corpus also included some publications on horsemanship in literary form. Stockhorst, who earned degrees as a German teacher as well as in the history of medicine in Göttingen, analyzes textbooks not least from the perspective of rhetoric. “In it, the early modern period comes to life,” she says enthusiastically. The strikingly beautiful books – most of them lavishly illustrated folio editions – indicate “that riding was indeed seen as an art. With their textbooks, the authors clearly sought to relate to the art discourse of the early modern period.” For Stockhorst, who has been Professor of Literature at the University of Potsdam since 2009, the key result of her research lies in the essential connection between form and content in books on horsemanship: “The authors did not intend to write practical instructions for riding students to carry in their pockets. Rather, they oriented themselves towards the liberal arts. They wanted riding to attain the status of an art, much like sculpture or literature.”

Early modern period as a hobbyhorse

“For me, the 18th century is an exciting time,” Stockhorst explains. “That's when the values that still mean a lot to us – civil liberty, modern democracy, and human dignity – were founded.” The 16th and 17th centuries, which also belong to the early modern period, have inspired Stockhorst above all intellectually. “In those years, many creative ideas emerged, for instance modeling horse riding according to the standards of rhetoric as an art.” After earning her doctorate, she spent about ten years teaching and researching European cultural history, which influences her work to this day. “Maybe it set the course for taking up cultural history later on,” she says. Basically, she continues to move along the path chosen with her habilitation dissertation: “Back then, I wrote about norms and deviations in poetry,” she explains. “Now I've become interested in the normative discourse in horsemanship – how close that is to poetry came as a real surprise to me.”

These days, most text corpus sources are digitized, so Stockhorst did not have to travel to archives or libraries. On a vertically positioned screen in her office, she could examine portfolio books up close and discover their elaborate details. For instance, she found an ornate bit with roller and spoon that “was not functional at all, and would in fact have been dangerous to use,” she explains. “Such bits were made to be put up as show pieces in a prince’s tack room.” Their sophisticated details testify to an exaggeration in horsemanship corresponding to the aesthetics of the time: This is how riding masters and courts played to the gallery. “Those who couldn't afford such abundance bought beautiful books on horsemanship and put them on their shelves,” Stockhorst explains. “The artfully designed portfolio books – precursors of today’s ‘coffee-table books’, so to speak – offered a way to demonstrate participation in the rulers’ knowledge.”

What were the functions of textbooks on horsemanship?

Contrary to what one would expect, the main focus of textbooks on horsemanship in the early modern period was not on teaching skills and providing practical guidance. Rather, the authors wanted to strengthen their reputation as experts. For instance, the completely unknown riding master Gabriel von Danup succeeded in this in such an exemplary way that Stockhorst dedicated a separate essay to his text “Neues und Lesewürdiges Gesprech” (New Conversation Worthy of a Read) from 1623, due to be published soon. “Danup is the most modern riding master in the German-speaking world. He wrote about the absolute and relative straightening of horses a hundred years earlier than previously known,” she says. In his literary dialogue, horses confront their brutal trainers. At the end, he calls for a new type of horsemanship in line with a systematic training documented in writing and internationally binding standards. With this text, Danup not only demonstrated his expertise, he also used it successfully as a work sample when applying for a new position as riding master. While French, Italian, and English riding masters early on staged themselves as independent artistic personalities, German riding instructors presented concise and systematic expositions. “They picked out the best parts from available publications,” Stockhorst says, “without becoming authors themselves.”

With the emergence of leisure riding, the book market began to focus on the middle class, as this target group was oriented to the lifestyle of the princes’ palaces and wanted to learn how to handle horses properly. On the one hand, the riding masters saw a surge in demand for their textbooks. On the other, they had to decide how much of their expert knowledge to give away, and what to withhold to keep up certain hierarchies. Stockhorst's next project will be about knowledge transfer as well: She will study maritime manuals to find out what textualization strategies were applied to pass on nautical knowledge. “Practices of text production will remain the focus of my research,” Stockhorst says, “and sometimes personal preferences will complement a topic.”

Prof. Dr. Stefanie Stockhorst studied German as a teacher and history of medicine at the University of Göttingen. She has been Professor of Modern German Literature/the Early Modern Period at the University of Potsdam since 2009.
E-Mail: stefanie.stockhorstuuni-potsdampde