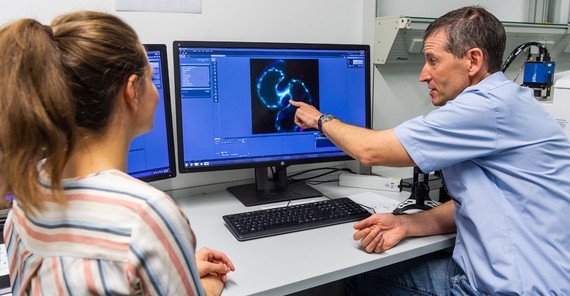 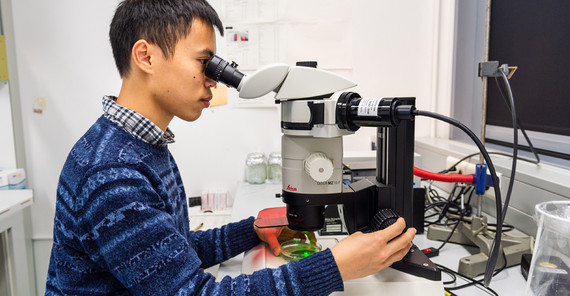 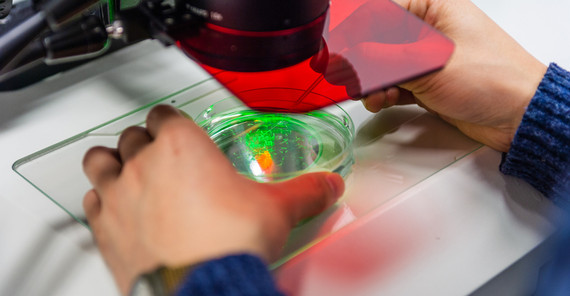 Most diseases go unnoticed for a long time before they are diagnosed: A virus attaching itself to mucous membranes or a cancer metastasizing when a genetic mutation has damaged cells in such a way that they can no longer function properly. So only the consequences will be seen or felt. This makes not only their treatment difficult, but also research of the disease etiology (development). What if a transparent organism could be used in research so that changes inside the organism could be observed to help understand why humans develop certain diseases? That’s all still up in the air? No, it isn’t! For many years, Prof. Dr. Salim Seyfried has been researching rare human diseases using zebrafish eggs. Zebrafish are vertebrates, as are humans, and therefore genetically more similar to us than one would expect. In addition, zebrafish eggs and embryos are transparent and can therefore be studied very well under a microscope. “Using state-of-the-art techniques such as light sheet microscopy or high-resolution confocal microscopy, we are conducting research on zebrafish eggs and hope to gain major insights into the development of rare diseases,” Seyfried explains.

Know-how from all over Europe for a common goal

Since autumn 2019, Seyfried and his team have been sharing their expertise and methods in the PhD program “V.A. Cure” funded by the EU. The consortium consists of researchers from nine universities and research institutes in six countries and has set itself the goal of researching vascular anomalies (VAs), as Seyfried explains. “Those affected often suffer from chronic pain and a massive reduction in their quality of life.” But vascular anomalies are very rare, so there is not much research into them, as pharmaceutical companies are often guided by economic interests. The EU wants to counter this by funding projects investigating such orphan diseases. “We are happy our project was selected from among a large number of excellent applications. After all, only 2.5 percent of submissions were selected in 2019.”

In “V.A. Cure”, researchers are studying a whole group of diseases – malformations of larger blood vessels and smaller capillaries and of lymphatic vessels. One example is the rare disease cerebral cavernous malformations (CCM), a genetic condition that causes malformations of small brain capillaries. What all these diseases have in common are underlying genetic defects. “It's a bit like cancer,” Seyfried explains. “In some patients, cells of the vasculature can become affected already in childhood, in others not until they are 50 or older – and we want to find out why.” To investigate the function of genes implicated in these diseases, the researchers use zebrafish eggs. In addition, they use cell cultures of human cells, some of which have been taken directly from patients. With these, molecular and cellular changes can be studied and pharmacological agents tested. But before therapies can be designed, a deeper understanding of the diseases is needed, as Seyfried emphasizes. “Take Covid-19: Initially thought to be a respiratory illness, we now know that it is also a disease of blood vessels and smooth muscle cells and may damage organs with fine capillary systems. Without the intensive research conducted over the past few months, this would not be known and could not be treated.”

Training young researchers from all over the world

“V.A. Cure” is a PhD program with a focus on training young researchers. “We want the doctoral students in this project to grow through their research – and help fight these diseases,” Seyfried says. This is also what brought Nastasja Grdseloff and Van-Cuong Pham to Potsdam. “The network is a perfect fit for me: It allows me to develop myself as a researcher while helping to understand diseases and hopefully help patients, too” says Pham, who is from Vietnam. After studying for his master's degree at Kyushu University in Japan, he is now doing research outside Asia for the first time. This is definitely a major change for him, not only in his research experience but also in his day-to-day life: “I miss Vietnamese food, and Japan’s retail and grocery stores.” For his PhD thesis, he is doing research on CCM, a disease for which neurosurgery is the only therapeutic option today. If the affected blood vessels are located too deep in the brain or near vital brain regions, surgery cannot be done. “That's why we urgently need a drug,” Seyfried says. In zebrafish eggs, Pham studies what cellular changes are triggered during this disease – and what can be done for prevention. To this end, he modifies the DNA using the CRISPR-Cas genome editing technique by which precise gene sections can be replaced or “switched off”. “Using the genetically modified zebrafish eggs, we can then observe how modified cells develop and what behaviors they show,” Pham says.

Nastasja Grdseloff did not have to travel far to come to Potsdam; yet the Austrian-born researcher admits she had to “adapt her German a little”. As a student, she used cell cultures, stem cells, and heart organoids in her research. Now she is working with zebrafish as well. She is interested in whether there are commonalities at the molecular level between different vascular diseases. It is already known that various vascular diseases are caused by different mutations. Yet, blood vessel cells show similar abnormalities and cannot be distinguished from one another. “This raises the question whether these diseases have a common denominator. Finding it could provide the basis for novel therapeutic strategies,” Grdseloff says. She, too, uses CRISPR-Cas genome editing to replicate the genetic modifications causing vascular diseases in humans to zebrafish eggs. “This way I can observe modifications from the very beginning and follow their development in real time – you can’t do that in humans.”

In November 2019, the network had its kick-off meeting in Brussels. “It was the first and last time all participants met before the Corona pandemic prevented further meetings,” Seyfried says. “It's a pity, since it is above all the diversity of the researchers involved that makes our network so special.” In fact, research in “V.A. Cure” largely benefits from its interdisciplinarity – the consortium comprises excellent partner laboratories with expertise in molecular biology and biomedicine as well as biomedical and pharmaceutical companies including Bayer Schering AG and AstraZeneca. “When it comes to researching diseases, each team and company has its limits,” Seyfried points out. “Whereas basic researchers often lack patient contacts, medical doctors are often unable to confirm hypotheses or assumptions in scientific experiments as they lack the necessary molecular research methods.” The biomedical and pharmaceutical industries face completely different constraints: Here, economic interests may lead to “rare diseases” receiving little attention. But these diseases are by no means as rare as their name suggests: In the EU alone, an estimated 40 to 50 million people are affected by them. The PhD students will benefit the most from close collaborations, as Seyfried emphasizes. They will not only work in their respective lab, but also have the opportunity to spend some time in collaborating laboratories. The students discuss their research results in regular teleconferences. However, their annual training at one of the partner facilities has also been moved online. Yet the exchange with other research groups – even if only from a distance – and the prospect of working at other facilities and examining research issues from different perspectives is especially important to Grdseloff and Pham: “These collaborations allow me to gain insights into their work and give me an opportunity to initiate new projects with them,” Grdseloff says. “For me, interactions between the teams and the training program of lectures and meetings are among the most valuable aspects of the network,” Pham adds. “Most importantly, I am part of a research team with a bigger goal – to understand these terrible diseases in order to have better therapeutic options one day.”

And there is yet another aspect which made the meeting in Brussels very valuable, as Seyfried states: “Meeting representatives of patients’ organizations was eye-opening to us.” Here, the researchers could learn first-hand about the daily suffering of those affected. “We usually deal with diseases at the molecular level and through the eyes of a researcher. The meetings revealed to what an extent even children suffer from these diseases. It was distressing for us to see their suffering, but also very motivating! It showed how important our work is.”

“V.A. Cure” is an international PhD program for 14 PhD students. It receives funding from the European Union under a Marie Skłodowska-Curie grant agreement. In their research projects, the PhD students investigate defects in blood or lymphatic vessels, in particular those resulting in malformations or morphological abnormalities.

Prof. Dr. Salim Seyfried studied biology. He has been Professor of Zoophysiology at the University of Potsdam since 2015.
Mail: salim.seyfrieduuni-potsdampde

Nastasja Grdseloff studied biomedicine and biotechnology in Vienna and Miami as well as medical and pharmaceutical biotechnology in Krems. She has been a PhD student in the “V.A. Cure” network since 2019.
Mail: grdseloffuuni-potsdampde

Van-Cuong Pham studied biology in Hanoi and Kyushu. He has been a PhD student in the “V.A. Cure” network since 2019.
Mail: pham1uuni-potsdampde