Is There a Right to Climate Protection? – Legal expert Christian Bickenbach examines the legal foundations of climate litigation 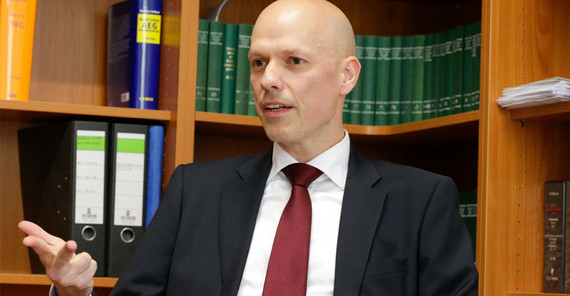 The dry summers of recent years are taking their toll. The effects of global warming, such as long heat waves or floods, cause damage running into billions of euros in forestry, agriculture, and inland water transportation. In addition to economic losses, they repeatedly claim lives. Does the state need to better protect its citizens from the dangers of climate change? Where does this duty to protect begin and where does it end? These questions are increasingly the subject of litigation.

The first climate lawsuit against the German federal government was decided in October 2019 – and it was sobering for the plaintiffs. The Berlin Administrative Court dismissed their complaint as inadmissible. The plaintiffs included three families from the organic farming sector and the environmental organization Greenpeace. They wanted the court to require the German government by court decision to comply with the National Climate Protection Target it had set in 2014. The cabinet decision stipulated that greenhouse gas emissions should be reduced by 40% by 2020 compared to the reference year 1990. For a long time, it looked as if Germany would fall short of this target. Only as a result of the Covid-19 crisis, it seems to be within reach after all – but nobody could have known this at the time of the decision by the Berlin Administrative Court.

Environmental protection is enshrined in the Basic Law

Farmers are experiencing harvest losses due to droughts or heavy rainfall – weather events that are becoming more severe and frequent with climate change. The families from Brandenburg, the Altes Land region near Hamburg, and the North Sea island of Pellworm based their lawsuits on freedom of property and occupational choice and the fundamental right to life and health. Bickenbach is Professor of Administrative Law, specialized in regulatory and infrastructure law, and notes with increasing legal interest the phenomenon of so-called “climate lawsuits,” because the question whether there is a right to climate protection is not easy to answer. It is true that environmental protection is enshrined in the German constitution as a state objective. But a state objective - in legal parlance - does not create a right or entitlement and is therefore not enforceable.

In the current case, the Berlin Administrative Court saw the German government’s climate target as a “political commitment and not a legally binding regulation.” In addition, the plaintiffs lacked the standing to sue. Currently, the courts are dealing with other lawsuits involving climate protection: Nine young people, including climate activist Luisa Neubauer, filed a constitutional complaint with the Federal Constitutional Court in February 2020. In their opinion, the climate package adopted in 2019 is far too lax. They demand revised and stricter regulations. The Peruvian farmer Saúl Luciano Lliuya has already been suing the energy company RWE since 2015. The farmer believes that global warming is threatening his livelihood - and that RWE’s emissions are partially responsible for this. The European General Court (ECJ) is hearing the case brought by ten families from the EU, Kenya and Fiji, as well as a Sami youth association, who want to achieve stricter EU climate targets. In the first instance, the Court of Justice of the European Union (EGC) had dismissed the case. The plaintiffs appealed.

The absolute minimum of climate protection

“It’s always about the violation of fundamental rights,” says Bickenbach, describing the legal foundations of the lawsuits. “Fundamental rights are generally rights to which an individual is entitled vis-à-vis the state.” The protection of human dignity, the right to freedom of assembly or the right to freedom of expression are typical examples. “Greenhouse gases are mainly emitted by companies and private individuals though,” explains Bickenbach. “So you have no state activity here where the fundamental rights can constitute a defense against the state.” The most interesting legal question is whether the state violates its duty to protect if it does not adequately protect its citizens from the consequences of climate change. Does the legislator do enough to protect life, health, property, and the freedom of occupational choice?

“The decisive point for us lawyers is: Where does the so-called prohibition of insufficient means begin?” Bickenbach says. This prohibition obligates the state to ensure an adequate and effective protection of the legal interests protected by fundamental rights. The nature, proximity, and extent of possible dangers determine the necessity and content of legal regulations, whereby the level of protection must not fall below a certain level. But what is legally necessary and sufficient with regard to climate protection? “What is the minimum that the German federal government must do for climate protection and the protection of fundamental rights?” Bickenbach asks. A decision is difficult – also because the causes of climate change are global and not limited by national borders.

Past decisions as a blueprint for the future

From a researcher’s point of view, Bickenbach is fascinated on the one hand by the legal diversity of climate claims, which have to be litigated before both administrative and constitutional courts. On the other hand, the climate issue also leads to fundamental questions in law that have to be reassessed juridically.

Christian Bickenbach also uses his “wall of decisions” for this purpose. In his office, the over 150 gray volumes of the Official Collection of the Senates of the Federal Constitutional Court fill several meters of shelves. The work meticulously and comprehensively lists all Senate decisions, argumentations and justifications on all kinds of legal issues and constitutional complaints since 1951. Here you can read, for example, how the ban on commercial euthanasia was overturned as unconstitutional. Three more volumes are added each year. Bickenbach searches the volumes for possible blueprints for legal issues related to climate protection. The overriding question is: “Which of our existing constitutional provisions could provide solutions to these new problems?”

This is a great challenge, particularly because there are not many laws in climate protection yet, he says. “That is only emerging gradually,” Bickenbach says. Previous decisions on duties to protect – for example against aircraft noise, the dangers of nuclear energy or chemical weapons stationed in Germany – could provide the lines of argumentation that are also helpful in legal questions on climate protection. “But when the Federal Republic of Germany enacts laws to fulfill duties to protect, these always also interfere with the fundamental rights of others,” Bickenbach points out. How sensitive this topic actually is becomes clear these days when fundamental rights are being restricted to protect against infections with Covid-19. “The difference, however, is that infection control measures are locally and temporally limited,” Bickenbach says. Protection against climate change, on the other hand, requires permanent regulations.

Meanwhile, the story of Germany's first climate lawsuit has come to an end before it has even really begun. Although the Berlin Administrative Court had permitted an appeal, the plaintiffs did not use this opportunity. “It only had a small chance of success”, Bickenbach assumes. Instead, they are now pursuing their goal with a constitutional complaint at the Federal Constitutional Court to enforce a right to climate protection in this way. Bickenbach things that also this hardly has a chance to be successful. Of about 6,000 complaints each year, only 1-2% are successful. “But it’s also about publicity, attention, and political pressure,” he says. In the future, climate protection issues will probably create and exert all this in court even more frequently.

Prof. Christian Bickenbach studied law at Johannes Gutenberg University in Mainz. Since 2015, he has been a Professor of Administrative Law, with a special focus on regulatory and infrastructure law, at the University of Potsdam.
Mail: christian.bickenbachuni-potsdamde

This text was published in the university magazinePortal Wissen - Eins 2021 „Wandel“ (PDF).