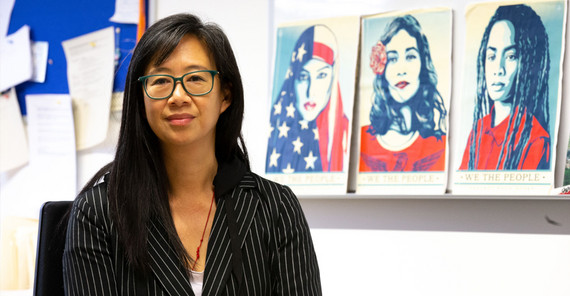 Photo : Sandra Scholz
Linda Juang's office shows the diversity of American society
Linda Juang is US American with Taiwanese roots. In 2014, the University of Potsdam offered her a position as Professor of Heterogeneity in Institutionalized Educational Processes. With her research, Juang hopes to make an important contribution to the educational success of immigrant children.

Linda Juang seems uncomfortable as she is being photographed for this article. Later in the interview she gets more comfortable, particularly when talking about her field. It is obvious that she does not like talking about private matters, but when it comes to her research, her expression brightens up and she gets very lively. Juang studies how societies – in Germany, but also elsewhere – can deal well with the fact that they are becoming more culturally diverse. In her research, she focuses on young people and how they can learn to communicate in light of their different cultural backgrounds. How can students, teachers, and parents understand each other in spite of different worldviews? With this in mind, Juang researches how young people with a migrant background evolve within society, and under what circumstances they grow up. For those growing up with a different cultural background in a majority society, she has found that cultural identities mix. Culture and identity are not static, she says.

Understanding your own background through exchange with others

Juang developed her research interest while doing her bachelor’s degree in child development. It struck her that not much scholarship had been done on children from immigrant families. “The study program offered just one course on black children and their development. Obviously, there was not enough research on these issues – a fundamental gap actually!” So Juang set out to change that by writing her PhD thesis on Asian American college students. “Maybe it was the course by my only African-American professor in Minnesota that made me consider becoming a researcher myself. My professor was one of the few who focused on black children and their development. Today I'm certain: She inspired me more than I realized at the time.”

Juang’s own background certainly had a major impact on her path in life, too. “My parents immigrated from Taiwan to Minnesota. And I noticed early on that in my family things were done differently than in my classmates’ families, starting with lunch.” Over time, she became very American which only struck her when she moved to Germany. “I think that I’m more exuberant than most Germans are.” The relevance of her research topic is also apparent in her own life. “Me and my two children are undergoing acculturation, that is finding our way in another culture and adapting parts of it. My children, for example, are genuine Berliners – Taiwanese-American-German-Austrian-Californian-Berliners, I would say. By contrast, I will never be a Berliner, because I came here as an adult,” says Juang, who now lives in the Berlin district of Charlottenburg.

In her research, she wants to understand children with a migrant background and their families. “I want to capture relevant aspects of their childhood experiences and development. And I want to help make the world a more peaceful place again. To achieve this, you have to start at an early age.” In light of these considerations, Juang is doing an intervention study at schools. “My field research is based on the Identity Project, which we have adapted in Germany. We ask young people to speak about their cultural backgrounds. In so doing, everybody learns something about their own worldviews and origins which helps them better understand and respect others’ perspectives. At least this is the hypothesis we are exploring at a school in the Berlin district of Neukölln,” Juang says. “In addition, we offer courses for student teachers to provide them with some theoretical background and prepare them for their future tasks. We hope to equip them with the skills they need to see cultural diversity in the classroom as a resource.” Some student teachers are already participating in a research project in the classroom – and quite a few of them represent a culturally diverse society themselves. “That's fantastic! When students with a migrant background meet teachers with a migrant background, their eyes light up,” Juang says, beaming.

Exploring migrant background as a strength

In the long run, she hopes, her research will make life easier for children and young people with migration backgrounds by creating more understanding. “But that is still a long way off. Research in developmental psychology cannot do this alone, sociologists and political scientists also have to come in. Much needs to be done and understood.” All in all she feels that there is not enough research on ethnicity and cultural diversity being conducted in Germany. “In the US, resource-oriented research on ethnic minorities began in the 1950s and '60s.” In Germany, this focus emerged only at the turn of the millennium. Until then, a deficit-oriented perspective on cultural and ethnic minorities prevailed. “Only now people are realizing the strengths and resilience factors of children and young people with a migrant background,” Juang states. Yet there is still a lot of research on language, and not enough on the social-emotional development of children and youths with migrant backgrounds. It may be more straightforward to assess language skills than evaluate the school climate statistically, although this is no less important. “The seventh graders we are doing the intervention study with are real, their problems are real. I love meeting them in the classroom, and working with them,” Juang says.

“The call of the University of Potsdam was a stroke of luck for me,” she says. As a city with many immigrants, Berlin provides ideal conditions for Juang’s research. So she gladly accepted the call to nearby Potsdam. Before, she taught at the University of California at Santa Barbara, but also gained some experience in Germany. “After I had completed my PhD thesis I wanted to go to Europe, and my former statistics professor, a German, recommended Jena, where youth development is a research priority. At the University of Jena, East and West German children and adolescents and their development were a research focus. It was a good fit. Later on, I worked at TU Berlin, so I could very well imagine returning to Germany and pursuing my research there,” Juang says. So it was probably also due to her focus on cultural diversity that she was offered a professorship in inclusion education in Potsdam. “Inclusion is often associated with disability in Germany. The UN uses a broader definition, and by offering a chair to me – a researcher with a focus on the social-emotional development of children who fled their country or have a migration background – the University of Potsdam adopted this broader definition.” Looking back she says it was a good decision: “I really enjoy working at the University of Potsdam, and also training student teachers. I am especially happy that we have secured funding for the research project in which student teachers go to schools. Hopefully, this will help them become teachers who are not overwhelmed by cultural diversity.”

Prof. Dr. Linda Juang studied Child Development in Minnesota and Developmental Psychology in Michigan where she also earned her PhD. She has been Professor of Heterogeneity in Institutionalized Educational Processes at the University of Potsdam since 2014.
Mail: juanguuni-potsdampde