About Searching and Finding Words – A psycholinguistic experiment 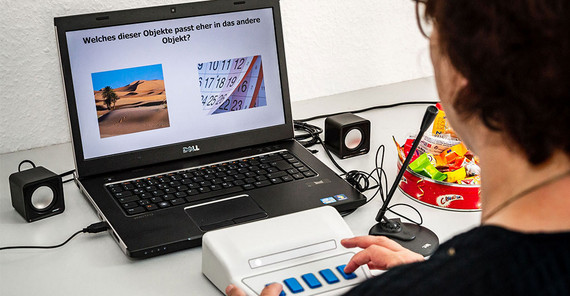 Photo : Kaya Neutzer
Searching for the right word
Authors are rich people. Their wealth lies in the words they have collected over the course of their lives: heard from mum and dad, heard in stories, found on the street, discovered while reading, felt in poems, and sung in songs. It is a treasure that, guarded and protected, does not become smaller when you share it with others. Anyone who writes, draws on abundant resources without wasting a single word.

It would be quite devastating for a journalist like me to lose parts of my vocabulary and not to find it again. And yet it happens with age. So a mixture of professional curiosity and nervousness brings me to Jana Reifegerste, a woman who is familiar with word-finding difficulties. She is a psycholinguist who researches language processing over the course of the lifespan. In her current project, she is investigating when and why aging affects morphological processing, both in healthy people and those with language-related disorders. The German Research Foundation funds the project, and Reifegerste will be able to test 280 subjects over the next few years - young and old people, students, professionals, and retired people between 18 and 89.

Jana Reifegerste welcomes me at the Potsdam Research Institute for Multilingualism (PRIM), which hosts her project. The room is almost empty - but I won’t need much more than a desk, chair, laptop, and button box for the test. Before we begin I have to answer a few personal questions and prove that I am neither demented nor depressive - two conditions that would falsify the test result. So I draw a cube and a clock, count down in steps of seven, memorize a sentence at the beginning that I have to repeat at the end. Done! The slight discomfort that comes with such an examination disappears and I concentrate on my first task.
So far, it has been scientifically analyzed only to a limited extent how language changes over the course of the lifespan “because it was assumed for a long time that the lexicon and grammar, once learned, will be retained forever,” Reifegerste says. Language in the healthy aging process has been widely neglected in research although we all know that people can be at a loss for words and at some point experience it ourselves. The language psychologist wants to get to the bottom of word-finding problems in old age. When do they start? How do they develop? Why do some people struggle more than others? Reifegerste wants to get a comprehensive picture. In addition to the cognitive tests, she therefore also collects personal data about origin, health, education, and occupation as well as reading habits and social behavior.

While the researcher is sitting at the table next to mine recording my questionnaire, I dedicate myself to the experiment. I am reading sequences of letters and decide whether they are actually existing or invented words. “Barn” is a real word, “baran” probably not. That's easy, I think, and still feel comfortable, also with unusual words. It is my profession. In the next task, I have to form the plural of nouns. Here, too, the words come easy. Because of my job, I rarely think about the plural forms of a thing or a person. The computer doesn’t want to know the plural of “campus”, but Jana Reifegerste asks me afterwards because she has heard so many different variations at the university. I know it’s called “die Campus” in German, but because that sounds strange, I say “locations”. We laugh.

These first experiments on morphology are intended to identify how well and quickly the participants are able to combine the parts of the presented words and whether there is a difference between nouns with regular and irregular plural forms. “While it is enough to internalize the rule for regular forms, other forms must be learned and memorized,” she explains. If you want to form the plural of “car”, you just add an -s. Words like “ox” are not so easy. You cannot deduce the plural, you have to memorize it. “With age, access to this stored ‘dictionary’ gets worse,” says Reifegerste. Grammar skills, however, seem to be less impaired, but this hasn’t yet been investigated in a large-scale study.

We continue the experiment. Two objects appear on the screen: a squid and a chimney. With a little imagination, I am supposed to decide which fits into the other. So I let the squid disappear into the chimney. Then the next mismatched pair appears. This time it is an orangutan and a lollipop. Then there is a band-aid and a phone and so on. While the absurd collages make me smile, I wonder what this game says about my language skills. I can’t figure it out and I don’t have time to think about it because the whole thing starts again. This time there is a different task, which I cannot disclose here so as not to influence potential participants. But I can say this much: I really have to mull over it.

It is well known that memory functions deteriorate with age. Attention also weakens and the speed at which our brain processes things slows down. It is unclear, however, whether people with diminishing memory will inevitably experience language problems. Reifegerste therefore takes a closer look at individual areas of memory. In addition to the declarative memory that stores facts and events, she tests the procedural memory with which people memorize practiced routines. This also includes rule-based grammar, which is retrieved and applied without thinking. “It is difficult to become aware of such automated processes. You can’t explain how to do something that seems to work by itself,” she says.

I’d put the following test in this category: In front of me I see a series of smileys that flash alternatingly. I have to quickly click on a keyboard to indicate where the face lights up: right, left, in the middle. Then: left, in the middle, right. The speed increases. The smileys are changing their position faster. At some point I start making mistakes and I’m happy when it’s over. For the next task, I have to concentrate on an arrow and click on whether it points to the right or the left. To mislead me, other signs are positioned around the arrow. But I don’t get distracted and focus on the center and successfully click through the test.

The ability to concentrate on only one thing and blank out everything else decreases with age as well, Reifegerste says. “You know this from talking to your grandparents who start wandering from the story they tell.” It is normal for older people to slow down in everything they do. But does this slowing down also affect finding words? And how can you counteract this process? That is why the researcher initially asked questions about social contacts and reading behavior. “Those who don’t read and speak a lot also use fewer words,” she says, and inverses the question: “Can a lot of social contacts and frequent reading curb the problem of finding words?”

Now my working memory is being challenged: I am to remember the sequence of squares that light up one after the other and then make them light up in the opposite direction. Then it’s about speed again: I see two squares with six dots each and have to decide whether they are arranged identically. I click and stare at the next pair - a game reminding me of playing dice. More and more new squares have to be compared. The dots dance in front of my eyes. Finally, I am released.

Reifegerste wants to better understand the course of changes in language. Little is known about it: “Most studies on aging examine students and compare them with seniors. It is interesting if they find differences, but we still know very little about when exactly these differences develop.” Do they begin in mid-adulthood when you start to feel that something is changing? Or are people between 40 and 60 possibly particularly fit because they have a larger vocabulary than the average 20-year-old and do not yet feel age-related cognitive restrictions? At the end of the study in two years she will be able to say more about it.

Dr. Jana Reifegerste studied psychology, linguistics, and behavioral sciences in Leipzig and Montreal and received her PhD in the Netherlands. She is currently researching at the Potsdam Research Institute for Multilingualism of the University of Potsdam.
E-Mail: jana.reifegersteuuni-potsdampde