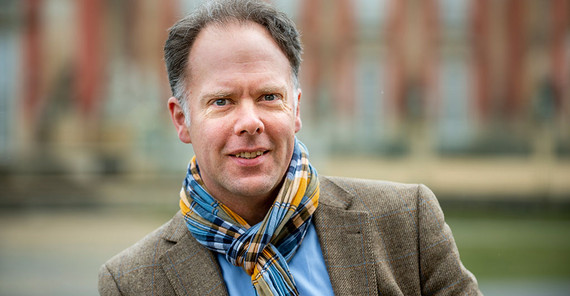 Photo : Tobias Hopfgarten
Prof. Dominik Geppert
In autumn 1989, the world went haywire and all eyes were on Berlin. The wall fell and within only a few months two German states became a united Germany. And in the middle of it all there was a young man, Dominik Geppert, who witnessed in awe what is now being taught as world history at schools all over the world. “I had the feeling that history is not something anonymous embedded in structures but something that affected my own life,” he says in retrospect. “A little later I started studying history.” Almost 30 years later, in autumn 2018, Geppert became Professor of Modern History at the University of Potsdam. He still has a passion for the period of transformation in Germany in the 80s and 90s –- and the conviction that a look into history is important for shaping the present and the future.

“I am not among those who say ‘history is a foreign land that has nothing to do with the present‘“, the historian says. “I believe that we can contribute to a better understanding of our time. We can take two steps back and adjust the focal length in such a way that we have a greater depth of field — and thereby also contribute orientational knowledge.” For the historian, two steps can certainly cover quite a large distance. His inaugural lecture at the University of Potsdam in autumn 2019, for example, was titled “Brexit: A Historical Perspective” and explained the policies of British Prime Minister Boris Johnson – not always easy to understand for continental Europeans – through political traditions in the United Kingdom since the early modern period.

Geppert was born in Freiburg but grew up in West Berlin, where he saw the end of the Cold War dawn at his own doorstep. Besides history, he studied philosophy - as a kind of “free leg”– and some subfields of law. “I thought I also needed the perspective of a lawyer. In retrospect I’d say: You should study law properly or not at all. ”As the son of a professor of criminal law, he knows what he is talking about. His father did not hold it against him that he did not want to follow in his footsteps. After all, his eldest son is continuing the law tradition. It did not take Geppert long to find his passion. During his second semester he was already fascinated by contemporary history. “I’ve always been interested in current developments and political events and how they relate to history,” he says. “That quickly led me into contemporary history.”

The historian found his first academic home in 1970s Britain. “The 90s in Germany under Helmut Kohl left many with the feeling of stagnation and of being hamstringed,” he explains. “Against this backdrop, I found the British history of the 70s exciting, when such a state of paralysis was broken with brute force and significant consequences.” This brute force had a name: Margaret Thatcher, about whose “conservative revolution” Geppert wrote his doctoral thesis. “I wanted to find out how this woman, who was an outsider in many ways, prevailed in the conservative party, which was highly paternalistic and aristocratic, and how she was able to turn the UK inside out in such a short time.” Since the people believed the country to be in a crisis and longed for a regime change, improbable political solutions suddenly became possible. In addition, it came in handy for Thatcher that many of her political adversaries did not know how to deal with a woman as an opponent on the political stage.

Originally, the newly graduated historian wanted to start a career as a political journalist. But when his PhD supervisor Hagen Schulze went to London and offered him a position at the German Historical Institute, he took the opportunity. “I asked my wife, who is a French teacher, 'What do you think about London? This is at least closer to Paris than Berlin…’.” They lived in the English capital for five years. It was a very special time, as Geppert emphasizes, during which he got to know Great Britain, its people, and the British academic culture. He especially appreciates the intensive, open culture of debate of the local academic community as much as he sometimes misses it in Germany. “I sometimes miss debates that are explicit but not personal. In Germany, it is sometimes difficult to take a different position when 500 people are of the same opinion. Yet as researchers, we depend on being questioned and questioning things ourselves.” Nevertheless, it was not hard for Geppert to return. “You get to know your own country from a different perspective when you are abroad - and to appreciate it.” He went back to Freie Universität Berlin. There he was able to obtain a Heisenberg scholarship. Then he also had two interim professorships in Marburg and Bonn - and twins in addition to the eldest son, who was born in London. “That was great, but not always easy,” he admits. “While I was commuting to Bonn for a year, my wife and our three children were alone in Berlin, at least during the week.” When he got a permanent professorship there, the family moved to Bonn, too.

The historian looks back affectionately on his nearly ten years at the University of Bonn (Rheinische Friedrich-Wilhelms-Universität). After all, he published and co-authored the history of the university in addition to his research work and teaching. He put the four volumes on the rector’s table in 2018 as a kind of farewell present for the 200th anniversary of the university before he moved to Potsdam. And he arrived at the right time here as well to join a research project that deals with the history of the University of Potsdam. It is about the transformation of the Karl Liebknecht College of Education at Neues Palais, the GDR Academy of State and Law in Babelsberg, and the Academy of Law of the Ministry for State Security into the new University of Potsdam. “That was an offer I couldn’t refuse,” says Geppert with a smile. “After all, I’ve already been exposed to this history. It is also helpful that I am new and have an external perspective on the controversially discussed history.” It is also helpful that he leads the project on the“ Transformation of East German Universities in the 1980s/ 1990s” together with Prof. Frank Busch, who is not only the Director of the Center for Contemporary History Potsdam (ZZF) but has also accompanied the debate about university history in Potsdam for a longer period. It is important to both of them that the study is set up as a comparison. In addition to the former Potsdam College of Education, the three PhD students in the project also look at the teacher training colleges in Halle, Leipzig, and Dresden. “This should enable us to make statements about developments in East Germany in general,” Geppert says. “I believe that this will enable us to draw conclusions about the entire history of transformation in the former GDR, even beyond university history.” After all, the changes in 1989/90 shaped academic careers as much as the lives of all other people in the country. “That’s why we hope that our project will contribute to coming to terms with the long history of the “Wende”.

Geppert didn’t come to Potsdam because of the university’s history, however. Everything was just right. The focus on contemporary historical research at the local historical institute and the close collaboration with local institutions such as the ZZF, the Center for Military History and Social Sciences of the Bundeswehr (ZMSBw) and others appealed to him. He enjoys the opportunity to help shape the research profile of a young and aspiring university. “Ultimately, I also felt the need to deal more intensively with developments in recent history. Because of the GDR past and the proximity to Berlin, they are simply more present here,” he explains.

“I was surprised how much the students, who were all born after 1990, brought up the issue of the German-German dimension in the seminars as their own history. As a teacher, that’s simply fun.” It shouldn't be difficult for Geppert to advance his own big project in the coming months and years, which is about the history of unified Germany after 1990 in the conflicting triangle of national unification, European integration, and global networking. “All three developments took place in close proximity — both in terms of time and space — and influenced each other. I want to elaborate on that.” The Wende does not let Geppert go.

Prof. Dominik Geppert studied history, philosophy, and subfields of law in Freiburg and Berlin. Since 2018, he has been Professor for the History of the 19th and 20th Century at the University of Potsdam.
Mail: dgeppertuuni-potsdampde