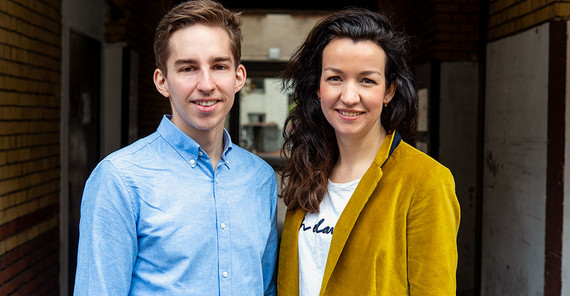 Photo : Noa Drinks
The Founders: Christian Zimmermann and Stella Strüfing
Sparkling or non-sparkling wine without alcohol often has an insipid flavor: either watery or just sweet. In any case, these alternatives are hardly associated with having a good time. Stella Strüfing and Christian Zimmermann, the founders of the start-up “Noa Drinks”, did not want to put up with this situation any longer. They developed a non-alcoholic gin with an authentic flavor to be able to compete with juice spritzer and non-alcoholic cream cocktails. Their first steps were accompanied by the Potsdam Transfer start-up service and the EXIST program of the Federal Ministry for Economic Affairs and Energy (BMWi). Some time soon, “Noa Drinks” is going to enter the market. Silke Engel met the team and tasted their non-alcoholic alternative to gin.

The ambience is a bit misleading when 33-year-old Stella Strüfing opens a bottle of gin in a plain conference room at the Griebnitzsee Campus of the University of Potsdam in the afternoon. The scent of juniper berries and spices fills the room. With some tonic water added, the light, slightly cloudy liquid sparkles in the glass. The first sip surprises me with the full gin flavor – although this gin was made completely without alcohol.

Born in a bar

Strüfling earned her master’s degree in innovation management and entrepreneurship in Berlin and the Netherlands. “I always wanted to start my own business,” she says. After graduating, she accompanied start-ups at the Beuth Hochschule für Technik Berlin (University of Applied Sciences) for two years. “Now I have switched sides to get my own start-up off the ground.” The idea was planted in her mind one night when she went to a bar and was not in the mood for alcohol. Non-alcoholic beer, spritzers or water were not to her taste. “Too ordinary, or too sweet,” she says. “And the waiter began to ignore us once he realized we were not ordering drinks in quick succession.” She would have preferred something tasty and began to wonder why there was no non-alcoholic gin tonic. Back at home, she began to read up on the subject and swap ideas with others. In July 2018, the time had come for her to start a new chapter: She participated in an early stage accelerator program and looked for a co-founder. Concurrently she began distilling in her kitchen. And she met Christian Zimmermann.

“At the time, I was still living in Switzerland,” remembers Zimmermann who had studied food technology at the Zurich University of Applied Sciences for five years – with a focus on product development. In the laboratory, his main task would be to get the original taste into the drink. When Zimmermann had the opportunity to go to Berlin on a six-month entrepreneurship program, his desire for change won over and he met Strüfing: “I was tempted by her idea of producing a non-alcoholic gin – but also skeptical about getting the taste right. My curiosity was piqued,” Zimmermann says. He became the co-founder of “Noa Drinks” where he is now responsible “for everything around getting the drink into the bottle”. Strüfing adds: “Everything just fell into place. As an experienced food technologist, Christian had the necessary skills to raise my hobby distilling to a new level.” For making non-alcoholic gin, Strüfing and Zimmermann have had to rethink the entire production process. “Market surveys have indicated that the common methods of removing the alcohol from the gin at the end won’t yield a good flavor,” Strüfing explains. “We produced several samples and had tastings with test persons. Then the samples were refined, and tested again.” After five to six rounds, the founders were satisfied with the result. “Parallel to the tastings, storage tests as well as biological and chemical analyses were carried out to ensure a safe and stable product,” Zimmermann underlines. After all, their non-alcoholic alternative to gin has to make do “without the 40 percent alcohol content that usually kills everything and preserves the product.” “Ours is a luxury beverage,” Strüfing remarks. “People try it once. If they don’t like it, they won’t try again. So it needs to smell fantastic, like a good meal. We wanted it to look good and transport the full flavor even when you drink it straight.”

Inspired by the University of Potsdam

Thanks to the EXIST start-up grant provided by the Federal Ministry for Economic Affairs and Energy (BMWi), Strüfing and Zimmermann could take their time. “We have a secure income for a year and are under no pressure to rush into the market,” says Zimmermann, who has access to labs and equipment. “Thus many things became possible. I took all raw materials and 200 empty bottles to Switzerland, produced the respective quantity there, and came back with the filled bottles.”

Strüfing and Zimmermann also appreciate the inspiring atmosphere at the University of Potsdam. “Many people are thrilled by the idea and ask when our gin will be available for purchase. Besides, we get valuable scientific input,” Strüfing says. “Support comes from many sides: food technologists, plant experts, and our supervisor Prof. Dr. Uta Herbst who is good at negotiating.”

The two founders are totally confident about their non-alcoholic gin. “It is market-ready,” Strüfing emphasizes. “Currently, it is undergoing strict lab testing. Without alcohol, there is no natural preservation. Therefore, we have to add preservatives and test what they do.” Zimmermann adds: “Extracts and distillates are purchased from the region around Nice in France where there is a long tradition in perfume making, so we can tap this knowhow. Finally, a co-producer in Germany finishes and bottles the gin.” Strüfing is sure: “Tastings and information are our door-openers, as the flavor is fascinating.” A first order from the catering trade has been received, and distribution will be financed through crowdfunding.

Start-up with a mission

In the long run, another point is important to the two owners: “Alcohol is the only drug you have to justify not taking,” Strüfing quotes author and actress Charlotte Roche who spoke openly about her years-long alcohol abuse. “We want to offer an opportunity to enjoy a night out at a bar without alcohol. We would like to establish non-alcoholic drinks as the normality in German households and bars. Hence our gin will be available in bars, restaurants and food retail markets all over Germany.”

And there are more products in the pipeline: juniper alternatives for gin, non-alcoholic rum, and whiskey. Strüfing and Zimmermann make it very clear that they are planning to build a strong brand with a good taste. “In this one respect, we are like Coca Cola,” Zimmermann says with a smile. “Even though we are just a small start-up, the formula of our non-alcoholic gin remains a trade secret.”

Stella Strüfing studied innovation management and entrepreneurship in Berlin and the Netherlands and is responsible for the business side of Noa Drinks.

The start-up “Noa Drinks” has been supported by the EXIST grant program run by the Federal Ministry for Economic Affairs and Energy since September 2019. Moreover, it has been accompanied by the Potsdam Transfer start-up service, the central institution for knowledge and technology transfer at the University of Potsdam. The start-up has developed a new method for the production of a non-alcoholic alternative to gin.