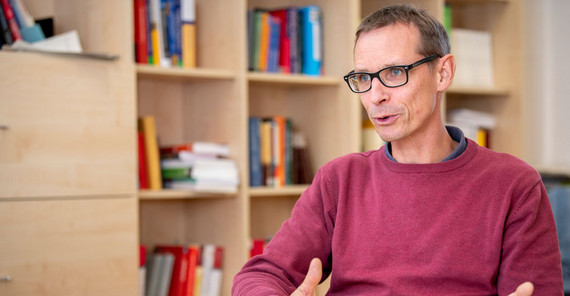 Photo : Thomas Roese
Prof. Dr. Ulrich Kohler
Latin helps with systematic and logical thinking as well as understanding German grammar and learning other languages. These are the common and repeatedly belabored assumptions about so-called transfer effects that make learning classical languages worthwhile. Researchers at the University of Potsdam and Freie Universität Berlin (FU) wanted to have a closer look and prove empirically why parents continue to send their children to Latin classes.

“Latin didn't help me learn other languages,” Ulrich Kohler recalls. The professor of empirical social research at the University of Potsdam had Latin in school, but was still not very good at languages. “But I think my language style was influenced by Latin, but not necessarily for the better, as many people tell me, since I tend to use long, convoluted sentences.” Together with Prof. Jürgen Gerhards from Freie Universität Berlin, Kohler asked why Latin is still popular today. The researchers don’t think that Latin improves skills in other areas. “The review of current studies is clear,” Kohler concludes, “Latin neither brings advantages in learning other languages nor in logical thinking.” There are no viable findings that Latin has more transfer effects compared to other languages. “Given these findings, we are interested in why traditional language profiling is still so popular," he says. To find out, the social researchers interviewed 778 parents of children in fourth and seventh grade at selected primary and high schools.

Latin still has an elitist image

Kohler sees three possible explanations for why Latin classes are still very popular with parents: First, Latin still has an elite humanistic image. “You can set yourself apart when education does not only serve the purpose of generating a better income,” Kohler explains. Latin thus becomes a distinctive feature that the educated middle class uses to differentiate itself from others. Second, parents often choose a humanistic high school for their children because of the good learning environment. “People don’t want these schools because they offer Latin and Ancient Greek but because they are good schools. They simply put up with Latin,” he says about what he regards as the strongest factor. The educational background and income of the parents also play a role. After all, they want to use the prestige of the school so that their children can also successfully complete the other subjects. And thirdly, the belief in the positive transfer effects persists - that is, thanks to Latin, pupils also have advantages in mathematics or logical thinking.” The sociologist was surprised at how firmly the positive transfer effects are anchored in parents’ minds. “Because they are not backed by any scientific findings. Rationality and empiricism play no role at all - regardless of the parents’ educational background,” Kohler sums up.

To investigate these three central mechanisms in detail, Kohler’s team created a “highly specialized data collection design consisting of a primary school and a high school survey”. The primary schools are located in Düsseldorf and are at the same distance from high schools that offer classical or modern language classes. “There we interviewed parents whose children were about to finish the fourth grade, so that they had already made the decision about secondary school.” At the same time, they conducted surveys in West German high schools, which let their students choose freely between classical and modern languages. “Since we are primarily interested in the educational background of the parents, we did not interview the students themselves,” Kohler emphasizes. The social researchers also assume that the parents significantly influence what foreign language their children choose. The evaluation of the surveys confirmed the researchers’ assumptions. The sociologist repeatedly emphasizes that the study “does not evaluate whether Latin is useful or not. Such studies are already available,” says Kohler. “Rather, our data show that, contrary to the current state of research, many parents believe in the advantages of Latin and therefore encourage their children to learn this language."

As might be expected, the results of the investigation did not only meet with agreement. Many experts and linguists were up in arms about them. The German Classical Philologists Association criticized the allegedly ideological underpinnings of the study. They said that the social researchers used a partially outdated basis and that the study’s empirical foundation was too narrow. “It seems that some people felt trodden on their toes by this project,” Kohler reacts to the criticism. “Although the controversial media discussion was less about our study than about the summary of the state of research. It is always about the question whether Latin has positive transfer effects. The Classical Philologists Association cites other studies and denies the quality of our sources.” The Potsdam researcher cannot understand this argument. “The studies cited by the Classical Philologists Association are not at all suitable for examining the assumed transfer effects.”

However, a study conducted by Dr. Tim Sawert, investigator in the DFG project and significantly involved in its preparation, shows that there is a positive effect of classical language skills. “He wrote fictitious applications, sometimes with and sometimes without Latin language skills in the CV. He wanted to test the extent to which the languages learnt at school influence the chances on the job market after completing the studies,” Kohler reports. “It was interesting that applicants who had taken up Latin in 5th grade and later also learned Ancient Greek were invited to the job interview much more often.” This finding proves again a firmly anchored belief in positive transfer effects.

At the moment, the DFG project is experiencing a turning point. “The core publication is currently being checked by a native English speaker.” After that, they will continue with a little less effort. While social scientist Kohler considers his work on this topic as done, he can imagine follow-up projects. “After Latin and Ancient Greek, we would like to look at other previously unidentified causes of educational inequality. We are considering looking more intensively at stays abroad,” Kohler explains.

Choosing Latin and Greek as a Foreign Language at School. An Upper Class Strategy for the Production of Distinction?