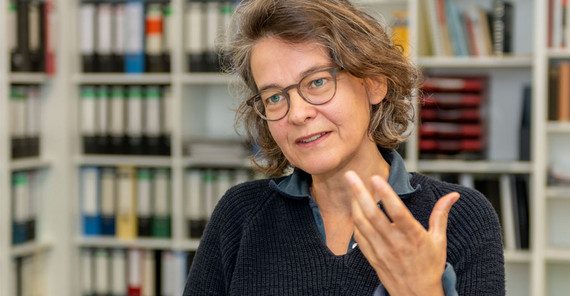 Photo : Tobias Hopfgarten
Prof. Dr. Susanne Strätling
Energy dazzles, transmits, and moves. It comes in the shape of electricity, power, heat, and movement, too. It is in chemical compounds, and in high notes. But when you are full of enthusiasm, you are full of energy, too. When there’s chemistry between two people, there is this special energy. If you have your way, you are energetic. Where there is energy, many things can happen. But why is that so? Slavicist Susanne Strätling researches the history of the term “energy” – and is fascinated by the energetic mess.

From metaphysics to thermodynamics

“Energy is a term that wanders around. It cannot be assigned to just one field,” Strätling says. She is Professor of Eastern Slavic Literatures and Cultures at the University of Potsdam, and fascinated with energy . Even though today energy seems to be mainly a physical quantity other disciplines and knowledge domains have only borrowed, a look at the history of the term reveals that this is not so. The term it comes from, enérgeia (ἐνέργεια), was coined in Ancient Greece. Best known from the works of Aristotle, the philosopher, it described a vivid “reality and effectiveness” – something that makes the possible become reality. “In Ancient Greece, the term ‘energy’ was used in metaphysics as well as in physics and rhetoric. It never belonged to just one discipline.”

It was not until the early 19th century that energy became one of the key concepts in physics. In 1800, the term was first used by British physician Thomas Young, but did not take hold. For many years, physicists used other terms, mainly “force”. Hermann von Helmholtz, who was the first to finalize the famous principle of the conservation of energy in 1847, spoke of the “conservation of force”. The 1848 edition of the legendary “Conversations-Lexikon”, or encyclopedia, by Friedrich Arnold Brockhaus did not even include the term “energy”, while its 1898 edition gave “willpower, spirit” as essential meanings, followed by “the ability of a body to do mechanical work”. It was only Einstein’s Theory of Relativity that coined the definition of energy as we know it today – and thus established the scientific dominance of the term.

“In fact, the term ‘energy’ had been used a lot in other fields such as philosophy, social sciences, and above all culture and the arts in the past as well,” Strätling explains. Enlightenment figures such as Denis Diderot and Johann Gottfried Herder turned their attention to energy as did many romantic writers, among them E.T.A. Hoffmann and Novalis. “With the success story of thermodynamics, the literary and aesthetic examination of energy intensified, too.”

The exciting thing is that the natural sciences and the arts see something completely different in the term “energy”, Strätling says. “The sciences need energy as a clearly defined, stable unit that can be calculated with.” After all, energy is what is conserved in a closed system in a physical process. It can be transformed from one form to another, but never generated or destroyed – according to the principle of the conservation of energy. “The arts discovered just the opposite in this transformability of energy: not stability, but flexibility. Energy fascinated them as an adjustable variable that can be used to describe both formal and semantic exceedances and transformations. While the sciences are interested in a delimitation of the term, the arts leave it open. For them, energy is not a term, but a metaphor.”

This can be demonstrated in various dimensions, Strätling says, both with regard to the impact of art and its production, and from a media theoretical point of view. On the one hand, the relationship between a work of art and its viewer is often described as energetic. “For instance, when we say a painting, a theater play, or a novel ‘electrifies’ us.” On the other hand, energy is applied to produce a work of art. This dimension is closely linked to the origin of the term as used by Aristotle, Strätling explains. “In his metaphysics, enérgeia and dynamis (δύναμις) form part of a conceptual pair also referred to as the actus and potentia model. Here, energy stands for what is not only possible, but actually realized – and thus becomes effective.” In the media theoretical dimension, the references are particularly multi-faceted and intensive. In this vein, it is interesting to note that various energy potentials have been ascribed to different media time and again. For instance, Wilhelm von Humboldt was influential in the field of language as a medium. Humboldt spoke of the enérgeia of speech, meaning that spoken language – in contrast to written language – is forever in the making, never completed. By contrast, art historian Aby Warburg referred to pictures as “energy preserves”, while performance artists like Marina Abramović are of the opinion that their art is based on the circulation of energy between performer and audience.

Energy as a hinge term

For Strätling, the fact that the sciences and the arts have used the term so differently does not suggest that there is an insurmountable contradiction. “I think, energy may well be a hinge term bridging the gap between the sciences and the arts, much like a clip connecting them.” There are many examples of this: the Baltic German chemist and philosopher Wilhelm Ostwald – who received the Nobel Prize in chemistry in 1919 – developed the concept of energetics as cultural science. In it, he attributes not only material, but also awareness processes to the transformation of forms of energy. “His energetic imperative ‘Don’t waste energy, use it!’ applied to all areas of life,” Strätling explains. And the Russian theologian, philosopher, and mathematician Pavel Florensky combined various lines of tradition of the term energy from theology, philosophy, physics, and poetics to prove that words are units of energy, too.

In any case, the disciplines have alluded to each other again and again with regard to energy, mostly in a fruitful way. Especially in the modern age, humanistic and scientific perspectives illuminate each other. Take the Russian Projectionists: “For them, a work of art is an emitter radiating energy,” Strätling explains. And as early as in 1923, Russian avant-gardist El Lissitzky conjured the visionary idea of an “electro-library” that overcomes the printed book.

As a literary scholar, Strätling is most interested in the role of energy in and for fictional texts. “Mostly, literature is available in written form. However, since Humboldt’s time, written texts have been persistently denied energetic potential, only the spoken word is granted the privilege of having energy. Besides, a forgotten story of energy concepts of written text emerges that is worth discovering,” – with enlightener Johann Gottfried Herder as prominent representative. He saw literature, in contrast to painting, as an energetic art form since it allows a work of art to be seen in the process, as something open-ended and fluid. Strätling has a particular passion for the turn of the 20th century. In those years, not only the modern, scientific definition of energy developed and as such diffused into many other fields. “It also plunged into a deep crisis,” she explains. “More and more, the awareness developed that energy and entropy are inseparably linked. After all, energy is not infinite, but brings other associations to mind as well: exhaustion, relaxation, tiredness.” Torn between energy euphoria and energy anxiety, these are the poles between which the artists at the time moved, with the avant-gardists leading the way. “The utopia of the avant-gardists, the unfinished project of their discovery of energy between curse and promise, is highly fascinating and of continuing relevance.”

The dazzling complexity of the term means that it is not easy for Strätling to search for the paradigms of energy: She has to cross the boundaries of her own discipline and look around outside her field to find “energy enthusiasts” like herself who are interested in more than one dimension of the term – at meetings, in talks, through publications. “Over time, a network of researchers has emerged, cutting across disciplines, of course, as this is the only place where energy can be found.” One day, the activities of this network could generate a complex history of the term. “We would get a sort of cultural history condensed in a term, a cultural panorama.”

Prof. Dr. Susanne Strätling studied German philology, Slavistics, and Pedagogics in Münster, Volgograd, Prague, and Berlin. From 2018 to March 2020 she was Professor of East Slavic Literatures and Cultures at the University of Potsdam. Since April 2020 she has been Professor of General and Comparative Literature with a focus on Slavic Literatures at the Free University of Berlin.
Mail: susanne.straetlingufu-berlinpde