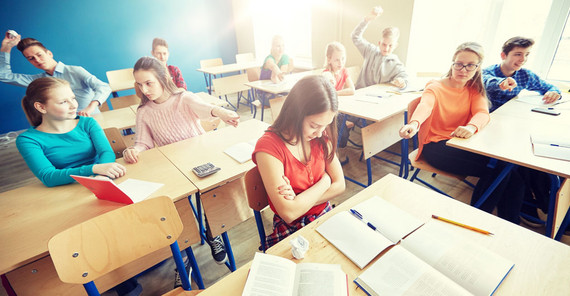 Photo : AdobeStock/Syda Productions
Bullying in schools is real – even virtual.
Hatred and harassment threaten peaceful coexistence in our society. Not just on the internet, but in the analogue world, too. They are expressions of intolerance, marginalization and contempt of entire groups of the population. In how far schools are affected as well is the topic of a study by educational researchers Sebastian Wachs and Wilfried Schubarth from Potsdam, and Ludwig Bilz from Cottbus. In this first nation-wide study on hate speech at schools, they want to reveal risk factors and show what teachers and students can do.

A new pupil joins the class. A few months ago, his or her family had to flee their home country. Nobody in the room knows the reasons or knows anything about the family’s past, the circumstances of their flight. Yet one of the pupils says, “We don’t want someone like that here. My mother said they all just come for the money.” “This is a strong message,” Schubarth says. “It is an opinion expressed in public, in the public space of a school.” In this concrete case, the harassment continued online. A racist WhatsApp group was formed in the class. A case of hate speech!

This is just one of the many examples teachers report more and more often from school life. Students are discriminated on the grounds of their homosexuality, physical impairment, or religious conviction. One might say that this is nothing new. And it has always been the task of schools to intervene. However, from their well-regarded study “How teachers act in case of violence and bullying” Schubarth and Bilz know that this happens all too seldom. Sometimes teachers feel they have no strength left with all the other tasks loaded onto them, sometimes they lack the respective knowledge or underestimate the consequences of turning a blind eye.

With hate speech on the rise – outside and inside schools – harassment has reached a new level, Schubarth underlines. He differentiates between hate speech, cyberbullying and verbal abuse. “Hate speech consists of words, pictures, and videos, and encourages the violation of someone’s dignity. In contrast to bullying, it is always aimed at marginalized groups such as refugees or people with a handicap,” Wachs explains. People may be attacked as representatives of the group they belong to. Hate speech generally includes a message, an invitation to discrimination. “This threatens democracy and has to be dealt with in class,” Wachs demands.

Topics with conflict potential are avoided

Wachs has specialized in violence on the internet. Together with socialization researcher Schubarth from Potsdam and psychologist Bilz of the Brandenburg University of Technology (BTU) Cottbus-Senftenberg he has developed a socio-ecological model that is used for the first national empirical study on hate speech at German schools. In it, the problem is not viewed in isolation as an online phenomenon, but as overlapping with everyday school life. Especially at school, children and youths experience their otherness and conflicts resulting from it. “Consequently, school is the place where they should learn how democracy and living together in society work,” Schubarth says. But today, teachers hardly speak about politics in class. “Often, there is a strong uncertainty about how to deal with the far-right Alternative for Germany party, AfD. Topics with conflict potential are avoided. Right-wing extremism has become a taboo issue, even though teachers should be very clear about their attitude towards it,” criticizes Schubarth who has done many studies on value and democracy education at German schools.

To approach the topic of hate speech at school from various angles, the researchers are conducting qualitative interviews with teachers and students in Berlin and Brandenburg. The objective is to find out their reactions to hate speech and what factors influence their behavior: they may be rooted in their own personality, in engaging with others, the school climate, or society at large.

But before they could start their interviews, barriers had to be overcome which none of the team members had expected. The explosive nature of the topic made it complicated to obtain the necessary permissions from the Ministry of Education, the supervisory school authorities, the data protection officers, and the ethics commission. “What if, let’s say, a student begins to realize in the course of the interview that she is victimized,” Schubarth explains one legitimate objection. A second barrier had to be overcome by the schools themselves. “Who would admit that hate speech is an issue? It’s not good for the image.” In his questions, Schubarth brings up painful subjects: Is there violence at school? Are individuals or entire groups discriminated against and met with open hostility? How do teachers react? Has the social climate changed? To give honest answers to these questions takes courage and the realization that the problem will not disappear if you turn a blind eye to it.

“Trump Effect” at schools in the USA

In the USA, first studies on hate speech at school have already found a “Trump Effect” and were able to measure a direct influence on interaction and communication, Wachs reports. In a study initiated and led by him in 8 countries, 7,000 youths between 12 and 19 were asked about their experience in dealing with online hatred. Around the globe – in Spain, Cyprus, and Greece, as well as in Thailand, India, South Korea, the USA and Germany, young people said they were confronted with hate speech on the internet. “Social networks act like catalysts here,” Wachs says. What used to be blared out at the regulars’ table in the pub is now published on the internet. “They are only a few, but they are very noisy, and have lost all their inhibitions, protected by the web’s anonymity.” In concluding their international study, the authors call for programs that offer young people coping strategies, teach them media skills, and strengthen their self-assertion. This is the only way to prevent negative consequences and stand up against hatred openly.

But at the end of the day, schools are part of society. Therefore, the study currently conducted in Berlin and Brandenburg includes social factors, too: Who and what provides fertile ground for the spread of hate? Have violence and discrimination become socially accepted? Does hate reproduce itself at school? The researchers assume that children and youths are particularly vulnerable, because of their stage of development. “Haters generate hate with high emotionality and criminal energy,” Schubarth explains. “There is a high risk of contagion. When youths witness hate speech among their peers, it becomes easier for them to join in as it gives them a sense of belonging and solidarizing.”

From Berlin-Neukölln to Lusatia

The qualitative interviews will help the researchers to develop tools for a representative survey. In the coming two years, 2,000 girls and boys attending grades seven to nine at all types of public schools will be interviewed, together with some 500 teachers: in Berlin’s districts of Neukölln and Prenzlauer Berg, as well as in Potsdam, and Lusatia. Thanks to the cooperation with BTU it will be possible to compare schools in Berlin with those in the area state of Brandenburg. The research team will include a number of master students writing their theses on the project, as well as two PhD students. This way, the results will flow directly into teacher training. As with the study on bullying, the outcome of the current research will also be published in practically relevant form and used for the further training of teachers. The aim is to give them powerful tools for countering hate speech attacks at school and thus accomplish their educational mission in this difficult field.

Prof. Dr. Wilfried Schubarth studied pedagogics and obtained his doctorate in Leipzig. After completing his habilitation in Dresden and doing research in Greifswald, he was appointed Professor of Educational and Socialization Theory at the University of Potsdam in 2004.
E-Mail: wilschubuuni-potsdampde

Dr. Sebastian Wachs studied education and earned his PhD in Bremen. At the University of Potsdam, he was appointed deputy Professor of Media Education with a focus on teaching and learning processes at school.
E-Mail: wachsuuni-potsdampde

Prof. Dr. Ludwig Bilz studied psychology in Halle and earned his PhD in Dresden. He has been Professor of Pedagogic Psychology at the Brandenburg University of Technology Cottbus-Senftenberg since 2016.