“Energy concerns us all” – Environmental scientist Johan Lilliestam is confident: A complete turnaround in the energy sector will come 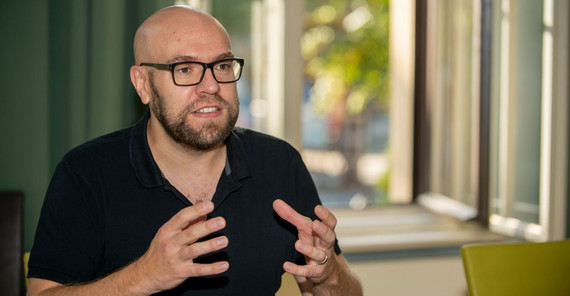 The world is hungry! In some 20 years from now, it will devour a third more energy than five years ago. And there is no end in sight. At the same time, climate change is no longer a bleak scenario in scientific models, but has become a painful reality. If at all, this trend can only be stopped if we succeed in overcoming our dependency on fossil fuels. A complete shift towards renewable energy is required, as fast as possible. But how can it be done, what are suitable technologies and political means? This is the type of energy policy issue Johan Lilliestam is researching. He knows: The transition is well underway. What is crucial now is to speed up its progress.

“Energy concerns us all,” Lilliestam says. “It is the backbone of our modern society and touches on all aspects of life. So we all have to work together to solve our energy problems.” First and foremost, it is the responsibility of politicians, as a secure energy supply is the lifeline of the economy and thus a genuine political issue. Besides, the global energy industry has itself developed into a branch generating hundreds of billions in revenues every year. Those who control the energy supply, or the resources for it, have the upper hand and control entire countries, Lilliestam underlines. Traditionally, the oil and gas producing countries have had this role. But with the energy transition picking up pace, the balance of power begins to change. “Renewable energy – sun, wind, water – is accessible to everyone, although to different degrees. Therefore, the distribution of power is shifting in favor of countries developing the necessary technologies.”

Making a contribution as an environmental scientist

However, an energy revolution that will have an impact on the climate can be completed through joint efforts only. Lilliestam researches how this can be done. Since 2019, he has been heading the “Energy Transition Dynamics” group at the Institute for Advanced Sustainability Studies (IASS) in Potsdam and also been Professor of Energy Policy at the University of Potsdam. But there was no telling he would end up doing this when he took his first steps, literally “on the other side”: “At the beginning, I wanted to work in the field of nuclear energy,” he says with a laugh. “But in the course of my physics studies I changed my mind. In 2002, my seminar group visited a nuclear power station. We were given a tour, and everything was presented to us as clean and emission-free. When I asked what the chimney was for, they said: ‘Well, to release radioactive gases. But only at night, no problem.’ Then I thought: This technology does not make sense.”

Lilliestam changed majors and began studying environmental sciences at Göteborg. “This is my way of making a small contribution.” Afterwards, he went to Germany where he obtained his master in environmental management at Freie Universität Berlin. “I wanted to have the chance to apply solutions,” he says. In 2007, he took up research at the Potsdam Institute for Climate Impact Research (PIK), and in 2013 he earned his PhD at the Central European University in Budapest, “an inspiring place where people from the East and the West were coming together at the time.“ The topic of his PhD thesis was the inevitable link between politics, the economy, and science in the energy sector – using the example of solar thermal energy plants. Back then, they were competing with photovoltaics, which had not reached maturity yet, for the status of best technology for the use of solar energy. As they are most efficient in sunny regions, they also became known as Desertec. Lilliestam researched the potential challenges and risks of large-scale power imports produced by solar thermal energy plants to be built in Northern Africa for the European electricity market. What if terrorists destroyed such a power station or the respective power lines – would the European power system collapse? And would a Europe overly dependent on electricity imports become vulnerable to blackmailing? “I was able to demonstrate that such electricity imports involve few risks – provided they are not excessive. Energy supply needs to be structured in such a way that a part of it may collapse at any time without serious consequences.”

But technology development took a different course. With solar cells becoming better and cheaper, solar thermal energy plants were cast aside. “The conclusion: There is no room for two solar technologies, apparently,” Lilliestam says, “especially not in the minds of policy-makers.”

His current project TRIPOD, which is funded by the European Union, focuses exactly on this competition between political objectives and discourses. More concretely, it looks into “the transition to a renewable electricity system and its interactions with other policy aims”. The spotlight is on the European states. Usually, their initial conditions, possibilities, and strategies in energy policy differ considerably. Besides, politics in Europe is caught between two stools: there is the national level, and there is the European Commission in Brussels. The Commission has decided that carbon emissions in the energy sector need to be cut by 93 to 99 percent by the year 2050. And it has more ambitious goals, such as raising energy efficiency and reducing demand. Besides, it plans to liberalize the market – with free competition for renewable energies – while at the same time Europeanizing energy policy, power grids, and the market. Lilliestam and his team hope to find out how these various political targets influence each other, what conflicts there are, how they could be solved – and how all this impacts the central goal: a complete transition in the energy sector.

The technology for the energy revolution is ready

“These days, many experts – such as physicists, climate researchers, and geoscientists – speak about the energy transition and how climate change will get worse if we don’t act,” Lilliestam says. “From a technological point of view I would say: The transition is making good progress.” There is no denying that, globally, emissions are still on the rise. But two crucial things have changed: Many technologies for the generation of renewable energy have improved over time and now involve lower costs. And the share of investments in renewables is going up everywhere. “Today, 95 percent of all investments in power generation in Europe go to renewables. Globally, their share still amounts to 70 percent,” Lilliestam explains. “Renewable energies have become so affordable that they virtually blow up the existing system. With investments in old structures coming close to ceasing, the system will tip for economic reasons.”

So the technology for the energy revolution is ready, but there are also some obstacles. First and foremost, the infrastructure and the market have not yet been adapted to the mechanisms of renewables. Solar power is available only during the day or while the sun is shining brightly, whereas energy demand peaks and falls in line with certain rush hours. Wind energy is produced in windy regions – but how can it get to the metropolitan areas hungry for electricity – from the North Sea to Bavaria, for instance? Efficient temporary power storage and an expansion of the grid could be the solutions. Furthermore, the grid is not yet prepared for the trading of electricity at lower levels – from the solar plant on the roof of a single-family home to the local grid, or even the neighbor. The mechanisms of the power market are another big obstacle: As electricity from renewables is available at certain times only, but then in abundance, its price would fluctuate on the free market at inefficiently high levels. Here, politics would have to jump in. “In this respect, politicians have to initiate a major transformation that will require a lot of political stamina.”

Lack of political will

However, this is exactly where the problem starts. “There is a lack of understanding of how radical the target of the Paris Agreement actually is – and what needs to be done to attain it.” For instance, carbon emissions have to drop by 100 percent to zero. “The EU has understood this, but not Germany. Here, there is still the opinion that a reduction of 80 to 90 percent would be enough – which would allow gas power stations to continue to operate.”

As yet, only a few players focus on 100 percent renewable energy. In June 2019, Lilliestam and his team joined the “Sustainable Energy Transition Lab” (SENTINEL) which has set itself the task of providing political institutions and players with the necessary information and models to make the right decisions for the successful transition in energy policy. In SENTINEL, teams of researchers from the IASS and other institutions combine their efforts to develop and present models which capture the technological, geographic, societal, and political details that may be important for the transition. “The main point is that energy models are designed which are tailored to renewable energy systems, rather than adapting existing models to integrate the rising share of renewables in fossil-based systems.” Their models as well as the data they are based on will be made available on an online platform. An interactive map of Europe has already been published where one can find out – down to the district level – where renewable electricity autarky would be possible. Potsdam, according to this map, is in fact likely to reach autarky, whereas Berlin – like most other big European cities – is not.

In any case, despite his focus on the European energy market, Liliestam still has a soft spot for photovoltaics and the CSP technology. In another project, he is developing very concrete ideas and proposals for politicians to help “concentrated solar thermal electricity” (MUSTEC) find its way to Europe in the end. After all, it might fill a supply gap: While photovoltaics “sleeps” at night, energy absorbed during the day by a CSP system could be fed into the grid.

Prof. Dr. Johan Lilliestam studied environmental sciences in Goteborg, and environmental management at Freie Universität Berlin. Since April 2019, he has been heading the “Energy Transition Dynamics” group at the Institute for Advanced Sustainability Studies (IASS) in Potsdam and held the Chair of Energy Policy at the University of Potsdam.
Mail: johan.lilliestamiass-potsdamde

The transition to a renewable electricity system and its interactions with other policy aims (TRIPOD)
Duration: 08/2017 – 07/2022

SOLAR THERMAL ENERGY PLANTS / CSP-SYSTEMS
Solar thermal energy plants concentrate solar radiation with the help of mirrors. They are best known as Concentrated Solar Power, or CSP, systems and are comparatively efficient and profitable – provided they have a certain size, and of course only where there is a lot of sunshine all year round.