Suddenly digital – Why Germany is now re-inventing its administration 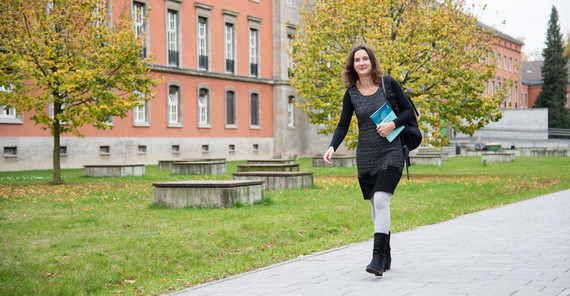 Photo : Karla Fritze
Prof. Dr. Sabine Kuhlmann at the Griebnitzsee campus.
From one day to the next, the corona pandemic has put public life into a deep sleep. For about four weeks now, nothing has been going on, or so it seems. Culture, economy, sports, education – everything has been put on hold. Yet, behind the scenes, a lot more needs to function at the moment than ever before. For instance, in administration. In order to comply with the hygiene regulations and distance rules that also apply in this context, administrative and other public bodies are attempting a digital cold start. Administrative Scientist Prof. Dr. Sabine Kuhlmann on how well-prepared Germany is for this fast-tracked digitalization – and whether or not it will succeed.

The corona pandemic is bringing a large part of the economic and public life in Europe to its knees. Is this also true for public administration?

I believe that in some areas, it can act with flexibility and it was possible to switch to working from home. But there are boundaries to that. On the one hand, there is a lack of technical equipment. Then there are also tasks that administration employees cannot perform from their home offices, also from a legal point-of-view. There are barriers in this regard that were not addressed in recent years so that the administration is not prepared for them now. As a result, there are now massive restrictions or even complete standstills in areas where services are provided to citizens, such as the administrative offices for citizens, because the digital transition has been slow. Other areas, on the other hand, are severely overburdened, such as the health authorities or job centers; but in these areas, digital services have their limits, too, partly because of insufficient preparation.

Is it possible, with this in mind, to let employees from within the administration help in other departments?

That is something we should strive for and such flexible personnel policies are likely already practiced with some restrictions. But this, too, cannot be implemented in all areas, especially if certain professional skills are required.

The whole world is currently trying to digitize as many work processes as possible and move them to the internet. Does this also apply to administration?

Efforts are indeed being made – in many places, not least in the administration of the University of Potsdam. It is absolutely astonishing how the administration suddenly deals with digital solutions in the crisis in a pragmatic and flexible way, even those that were considered impossible and not legally valid prior to corona times. Now, they adopt this flexibility, knowing full well that many things will collapse otherwise. That should give us some food for thought. We should see this as a window of opportunity and look back at the end of the crisis and change the framework conditions – because it is possible!
For example, data exchanges between agencies have become much easier all of a sudden. For a long time, there were claims that this was not possible for data protection reasons. Whether it was at the job center or in refugee management – everywhere, data relating to individuals had to be recorded again and again, in contrast to the so-called "once only" principle. Suddenly, we are seeing more flexibility in this regard. Apparently, in some municipalities it is now even possible to apply for a residence permit online; this was completely unimaginable before.
This reminds me of the transformation period in Eastern Germany after reunification, where a lot was possible. I think we should observe these developments and look at what works and what makes sense. And also look at how we can adapt our legal system so that we can guarantee improvements AND legal certainty.

How well does the administration do its work in a state of emergency?

I am not under the impression that everything is in a state of chaos. Of course, there are some areas that are stretched too thin. Health authorities, job centers, economic development agencies. But it is still good to see where there are needs and which resources we must set aside and where, for example, in care, in risk and disaster management, in certain areas of prevention. In the long term, appropriate lessons should then be drawn from this, the optimization of decision-making and administration responsibilities should be reconsidered and, above all, policymakers should take note of existing risk analyses.

Where do you see a need to catch up in terms of digitalization?

In a whole range of areas. On the one hand, we need to start where there is a high demand from citizens. Where administration reaches millions of citizens: administrative offices for citizens, county clerk offices, child allowance, parental benefits, federal training assistance, vehicle registration, construction permits, job centers etc. Processes there should work without media disruptions. There is a lot of potential there for both sides. The Online Access Act (Onlinezugangsgesetz) already mandates the digitization of the 575 most important administrative services by the end of 2022. It remains to be seen if this can be achieved in time. On the other hand, administration also has to make changes in terms of internal communication, for example when it comes to data exchange. That way, citizens would not have to constantly re-enter their data. Of course, this would have to be done in a way that is compliant with data protection laws.

What has been a positive surprise for you?

The flexible response and creativity, but also the courage when it came to solving problems – also taking advantage of gray areas of the law. This goes to show that administrations are full of creative minds that are by no means ponderous, but want to find solutions.

How does Germany compare with the rest of the world in terms of digital administration?

The initial situation is rather bad. This is reflected in the indices, in which Germany finds itself in the last third. Some progress was made, however, in the last few years But, at the same time, the gap between Germany and other European countries has been growing. This means: Germany is making progress, but others are even faster. That is why I doubt that the requirement of the Online Access Act – to digitize the most important administrative services by 2022 – can be achieved. At the same time, I hope that the crisis makes one thing clear: We have a lot of catching up to do.

Will the crisis also change the way the administration works in the long term?

Yes, I am quite sure that there will be shifts in many areas. How much things will change remains to be seen. There are already calls for centralization, for instance in emergency management or health protection; see the changes to the Infection Protection Act. One might question whether this is always appropriate, since decentralized management works quite well and deviations can make sense. But the question of the distribution of tasks between different levels and administrative areas will become increasingly important, especially in times of crisis and in connection with digitalization. There will also be a transformation within the administration and the impact on employment and skills will have to be discussed.

Can administrative science help with this process of change by actively providing guidance?

The importance of science can currently be observed every day. “Virologists are in command,” the magazine Spiegel recently wrote. This will also be of importance in other disciplines. In the context of the lockdown issue, social psychologists, educational scientists and legal experts have also increasingly had their say. In the field of administrative science, there are now international initiatives that deal with crisis management in different countries and the lessons to be learned for the future – also by comparing countries. They deal with issues such as the distribution of competences, the choice of measures to be taken in a crisis, the capacities and resilience of administrations, the use of knowledge in political decision-making, but also the role of the media in this context. I believe that this will enable us to contribute to improving the evidence base of political and administrative decisions, especially in times of crisis.