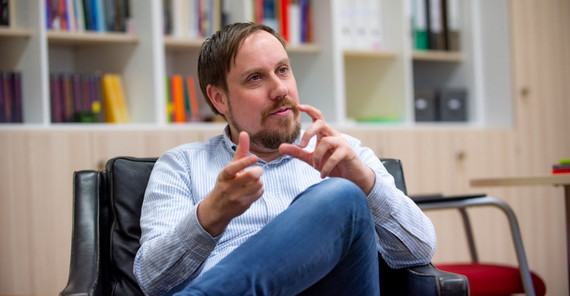 Photo : Tobias Hopfgarten
Prof. Dr. Fabian Schuppert
At first with hesitation, then with severe consequences for each individual – all over the world, governments are countering the threat of the novel coronavirus, which had been underestimated for a long time, with measures that few people have ever experienced first-hand: mandated work from home, strict regulations for maintaining distance from fellow humans, controlled curfews. At the same time, states are discovering – or rediscovering – themselves as saviors of a faltering economy. Matthias Zimmermann talked to Fabian Schuppert, Professor of Political Theory at the University of Potsdam, about the consequences of the corona crisis for society and the individual and about the question of whether anything can be learned from such crises.

As a political scientist, how do you perceive the current development of the corona pandemic?

First of all, I discovered that it is incredibly difficult for many people to understand what exponential growth means. Simply because numbers are so incredibly small at the beginning. At a very early stage, however, I started to think that we would have to react more quickly and more decisively in order to be able to contain the spread. At the same time, as a political scientist, I look at the measures now being initiated by politicians and wonder: How does the state legitimize these comprehensive restrictions? In difficult times, how can such drastic measures, which considerably restrict the freedom of every individual, be introduced – and successfully justified and explained? It should already be clear by now that after the corona crisis, we will no longer be where we were before – also with regard to our political system. This needs to be discussed.

The pandemic began as a medical problem, but is now expanding into a global economic crisis. You do research on social inequalities: Is the crisis hitting the weakest people hardest again?

Yes, that is a huge problem. Above all, because we don’t seem to be doing a good job of adequately protecting the most vulnerable in society. We may protect those who are most vulnerable to the virus, but not those who are hit hardest by the crisis that comes with it. This can be seen, for example, in the measures that have been implemented. The very first thing they said was: we are supporting the companies, there are loans galore. But who was not talked about: Workers, the self-employed, those in precarious employment. They were not a priority. This is a problem of the solidarity community. There was – with good reason – a backlash, and fortunately improvements were made in this area. Whether this will be enough in practice, however, especially in sectors that do not receive the same appreciation as large, well-organized companies anyway, such as the cultural sector or the retail sector, remains to be seen. To be honest, I am rather skeptical about this. Many with a lack of visibility will not be helped to the same extent. It was the same with the financial crisis in 2008. Learning from it, and improving on it, must be our ambition.

What could be improved?

It is important to ensure that the funds reach those who need them most. Deferring tax prepayments for all companies is pointless now. Not all companies are left with no reserves; at the same time, there is an incredible number of small and medium-sized companies that are in really bad shape. We have to find a way to counteract this. And that is a question of political will, not feasibility. It is not the case that we have no means at all for this. At least in the short term, we could provide basic security for people who need it – in other words, help them without bureaucracy and cushion their fall. This is not about demonizing companies, but really taking into account everyone who is massively affected by the economic consequences of the corona crisis. You have to see the people behind the companies. The state has a duty to them!

Will the crisis and its consequences increase inequalities or will there also be opportunities?

The optimist in me would like to say that this crisis will also lead to change. But I don't really believe it. In my opinion, the chances of change were greater during the financial crisis. At that time, the whole world could see how damaging the austerity policy was, how catastrophic the European Union's treatment of the southern European states like Greece and Spain was. If this has not led to a shift in thinking, I can hardly imagine that the current crisis will change much. Moreover, the longer the pandemic lasts, the more the discussion will revolve around other issues: How many have died? Is the health system stretched to its limits? The focus will not be on inequalities related to the crisis and to existing inequalities, but rather on the sick and the overall economic situation.

One of your research topics is “climate justice”. Are you afraid that in view of the corona crisis other equally pressing problems like climate change will be pushed off the agenda?

In the short term, definitely. And that is understandable. But I believe that in a year's time we will also be talking about climate change again. Because climate change will not do us the favor of going away again. CO2 emissions will continue to decrease as a result of the crisis. But this is a deceptive temporary development, which will possibly trigger a false belief that we are on the right track. That is something I worry about.

“Currently, we are only marginally making use of digital media” – Prof. Dr. Dirk Richter on the possibilities of conveying knowledge and skills online „Responding calmly to the unfamiliar circumstances“ – University President Prof. Oliver Günther on crisis management during the corona pandemic