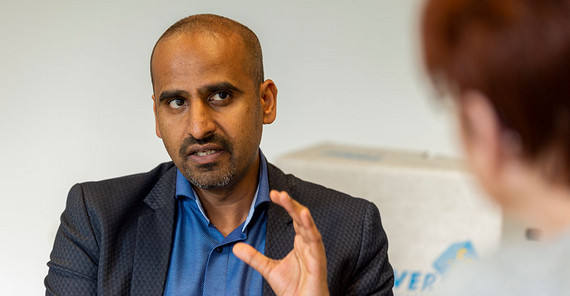 Photo : Tobias Hopfgarten
Prof. Amitabh Banerji
They measure, test, record, and present their results. In approximately 300 German student labs, as their national association estimates, about half a million children and youths put on lab coats and safety goggles to become junior researchers for a day every year. Student labs have proven their value, not only because they support science classes at school. With a strong focus on specific applications, subjects like biology, physics, and chemistry take concrete shape. The new student lab “ILUP” (Innovation Lab University of Potsdam), established at the Chair of Chemistry Education at the University of Potsdam, takes up the concept and develops it: While standard lab experiments correspond closely to the school curriculum, tasks at the ILUP focus on exploring future technologies. The first student groups have already visited the lab and at the beginning of the 2019/20 winter semester it has started its regular operation.

A room full of murmurs. More than 20 Master’s students, future chemistry teachers, have assembled for a final rehearsal. Not for any kind of concert, but for classes that will be given at the new chemistry education lab at the University of Potsdam in a few days’ time. The teacher trainees position themselves at their workplaces. All materials that will be needed today are neatly laid out in front of them, including worksheets and tablet computers. Some last briefings, and then things get serious, and the room quiets down. Along the aisles, the teacher trainees stand in groups of two – a “teacher” and a “student”. Today, their task is to build an organic light-emitting diode (OLED), clearly a technology of the future. They use organic material which, rather untypically, conducts electricity and emits light.

Laura Teidge and Marleen Berlet are among the participants in the test run. For the next 90 minutes, Berlet will take on the role of the student. For her, and the other teacher trainees, the role play is also a challenge: While the “teachers” have to give precise instructions, provide the right amount of assistance, and always keep an eye on the time, the “students” have to think about what questions students might ask, and what corrective interventions might become necessary. The two future teachers know their parts very well: Teidge explains the experiment. To help with the practical implementation, she later plays videos on her tablet that illustrate each of the four steps. “Visualization is one of the methods we definitely want to apply in the lab,” explains Amitabh Banerji as he quickly glances over their shoulders. He is Professor for Chemistry Education and established the lab just a few weeks after changing from the University of Cologne to Potsdam. “The tablet computers are used to minimize the failure rate,” he says. “In Cologne, we found out that instruction sheets were not fully read. For today’s students, media access is a better option and objectively helps to minimize mistakes.”

By now, Teidge and Berlet have completed the first step – identifying the conducting side of a piece of special glass, cleaning it with acetone, and masking it off with tape. Now the two move to an experimental setup on the other side of the aisle where Berlet tapes the glass to a computer fan connected to a 4.5 volt battery. She sprays about 0.1 milliliters of Superyellow, an organic semiconductor and the most important part of the OLED, onto the rotating glass. It is not easy to handle the syringe while wearing gloves. The real students might have problems with that, but Berlet manages at the first go. It only takes a bit longer to remove the piece of glass with the homogenous, deep yellow layer on it. It seems the piece of tape was a bit large and does not come off easily. Again, Banerji stops by. In the past, the semiconductor layer was applied differently, he remembers. “We used a drilling machine for the rotary coating.” But it was dangerous and resulted in a comparatively high failure rate. “By reducing the concentration of the semiconductor solution we managed to halve the speed at which the glass plate needs to be rotated,” he explains. “So a simple computer fan will do now.”

While Banerji walks around to check how other groups are doing, Teidge and Berlet proceed with the third step: Supervised by Teidge, Berlet places three drops of Galinstan – a liquid metal alloy – on the copper strip of a mounting consisting of a slide, two narrow rubber strips, and self-adhesive copper strips. They are now heading for the last and most important step of the experiment: Berlet places the special glass with the semiconductor layer on the mounting and fixes it with clamps. Then she connects the positive pole of a 9 volt battery to the exposed glass, and the negative pole to the copper bands. As a result, the contact area between the Superyellow and the Galinstan lights up brightly in a greenish yellow. The other teams complete their experiments successfully, too. But they have not yet finished. The practical experience needs to be underpinned by theoretical knowledge. The school students will be given an initial theoretical introduction into the topic before starting the experiments. So the teacher trainees turn to the worksheet next. It includes three tasks to be completed on the tablet computer. Everybody seems to manage within the given time. Banerji is visibly satisfied. The group came through the final rehearsal very well. “It is a load off my mind that the teacher trainees managed so well,” he admits. “So the theoretical and practical side can be handled within the specified time. The test exercise today has given them confidence and further improved their understanding of the upcoming class.”

Experiments show where we are headed

In the lab, Banerji wants students to feel a sense of mastery. It is demotivating to see elaborate experiments fail. All too soon, learners might conclude that the natural sciences are too difficult. And teachers are also less prone to accept topics if the related experiments are not convincing. “We want to demonstrate that science is fun. Especially when it comes to innovative topics, it is extremely important that the experiments show the intended phenomena clearly and are robust enough so that success is likely,” Banerji explains. Anke Wienecke of the Voltaire comprehensive school in Potsdam is one of the teachers who plan to visit the lab with her students later during the spring semester. Her 11th graders will build organic light-emitting diodes as well as organic solar cells. “I use the opportunity as I think it is very well suited to motivate students to develop a deeper interest in chemistry. The experiments are relevant to their lives, which can support their interest in learning,” she says.

Banerji is convinced that the new lab will help familiarize students with science. “With our approach, we intend to highlight areas where science will play a major role in the future,” he explains. Where are we headed? This is the question he wants to give answers to. Selecting topics is not easy. Currently, he focuses on issues around climate and energy as this is what students are already drawn to. “To approach a topic via an experiment, and in an innovative context, makes future technologies fascinating. After all, we not only have to think about how to tap new energy resources, but also how to use existing ones more efficiently.” At the present time, the student lab focuses on experiments in organic electronics. In addition to LEDs, students can assemble solar cells based on organic semiconducting materials. But new topics are under development, such as the decomposition of carbon dioxide into its elements – a field where research is still in its infancy. DIY science is Banerji’s way of inspiring young people to consider a career in research and development and take an active part in shaping the future.

In his nearby office, Banerji speaks about his plans for the lab. He is keen on developing it further, so that other current research topics can be refined didactically and presented to learners and teachers. For some time, he has pondered the question of how scientific research can be integrated in science classes at school. “We have come up with the idea of using the student lab as a bridge,” he explains. To this end, a suitable concept will be developed as part of the project. Collaborations with adjacent subjects such as biology and physics are also being prepared step by step. In all this, Banerji does not have to start from scratch as curricular innovation is one of his research priorities.

In the future, interested schools can obtain lab kits

Over a cup of coffee, Banerji takes a look into the future. To enable teachers to integrate current research topics into their classes, his chair will prepare suitable learning materials for them. And it will come with an attractive service: Banerji will offer sets of utensils for the various experiments. First talks on the marketing of the lab kits are being held with Potsdam Transfer. Banerji gets enthusiastic – in Cologne, the service was very well received.

In the 2019 winter semester, the student lab has started its regular operation. Eight to ten schools are invited per semester. The current topics are particularly suited for grades 11 and 12. “We recommend relating our experiments in organic electronics to teaching contents on electrochemistry, synthetic materials, or dyes.” With an eye on the clock, Banerji signals his desire to end the interview. There is more work waiting for him. With a friendly goodbye he rushes to the next room.

The new generation of smartphone displays already uses organic electronics. This novel technology allows manufacturers to develop flat and energy efficient screens with pictorial results even more brilliant than those of liquid crystal displays. Screens may even be bent or manufactured in a totally flexible way. But organic electronics not only revolutionizes the display and light markets, it is also used in photovoltaics – for instance in transparent solar cell film that uses organic semiconductors.

Prof. Dr Amitabh Banerji studied chemistry and computer science at Freie Universität Berlin to become a secondary school teacher. In 2012, he completed his doctoral thesis on the experimental-didactic use of organic light-emitting diodes at Bergische Universität Wuppertal. Between 2014 and 2019, he was assistant professor at the University of Cologne. In the spring of 2019, he became Professor for Chemistry Education at the University of Potsdam.
Mail: abanerjiuuni-potsdampde