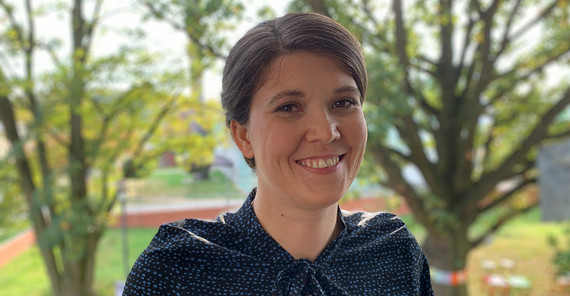 Photo : Antje Horn-Conrad
Paleoclimatologist Stefanie Kaboth-Bahr
Some look like popcorn, others like flattened snail shells - protozoa floating in the ocean or colonizing its ground. The microorganisms known as foraminifera include about 10,000 different species. Paleoclimatologist Stefanie Kaboth-Bahr is particularly interested in the fossil forms that have survived millions of years in over 40,000 species. They help her understand the climate of the past.

When Stefanie Kaboth-Bahr studied geoecology at TU Bergakademie Freiberg, she did not know that her professional journey would soon take her across the oceans. But then she switched to the Alfred Wegener Institute in Bremerhaven for her diploma thesis, went on an expedition to the Arctic and took part in an expedition of the research icebreaker “Polarstern” to the North Pole. She learned from marine biologists and paleontologists how to examine microfossils and analyze them using geochemical methods to draw conclusions about the climate of the past. She screened sediments for everything larger than 63 microns and sorted out the multifarious foraminifera under the microscope. Then these microorganisms had to be crushed into even smaller particles, washed in an ultrasonic bath and dissolved in acid to be able to analyze the escaping gas by mass spectrometry. Based on the measured isotopes, statements can be made about how much ice there was in individual periods of geological history, the temperature, origin, and density of the water. “That was it,” says Kaboth-Bahr. She had found her subject. There was no way back anyway: “I had lost my heart to marine research at sea,” she says, raising her hands in a gesture of defenselessness.

From North Pole to Mediterranean Sea

While she was still working at the Alfred Wegener Institute, she was accepted for doctoral studies in Utrecht, the Netherlands. She was standing in the polar suit in the cold room, working on her ice samples when the phone rang. She was very happy also because she was to go to warmer areas. In the Gulf of Cadiz, the doctoral student examined the outflow of the Mediterranean into the Atlantic Ocean. “The Mediterranean is considered a salt source for the North Atlantic and changes the ocean’s density with the incoming water. This in turn affects the climate in Northern Europe,” explains Kaboth-Bahr. In her dissertation, she was able to demonstrate that the African monsoon is an important factor in determining how much salt flows into the Mediterranean Sea and then into the Atlantic Ocean.

She is still fascinated by being able to establish such correlations using microfossils. As a postdoctoral researcher, she now brings this marine component to Martin Trauth’s working group in Potsdam, who also did his doctorate in marine paleoclimate research but is now mainly working on the African mainland. “I'm now taking a step from the ocean to the land,” she describes the changed perspective. She investigates over long geological time scales how the climate conditions on land and in the ocean influenced each other. Using geoscientific statistics and life science data sets, she looks far into the past, searches for recurring events and larger context. “I solemnly call it the ‘heartbeat of the climate’, but in fact, if you step back far enough and look at long periods of time, you can indeed recognize a rhythm,” explains Kaboth-Bahr. Ultimately, the Potsdam researchers led by Martin Trauth want to find out how such climate changes affect the development of early humans, their migration routes and their cultural development. “How many climatic variations are needed for an evolutionary boost?”, asks the researcher.

Now she is directing her attention to Africa

She likes the fact that geological processes are not researched in isolation at the University of Potsdam but in their interaction with biological developments. What attracted her to go to Potsdam, however, was above all the expertise of Martin Trauth, who is a specialist for statistical evaluations of the collected data. “I have come to the well-feathered nest. Everything has already been measured in Africa. The data is already available,” says the young researcher, who recognized the opportunities of the open topic postdoc program. “Such an opportunity is quite rare in Germany and the University of Potsdam is a pioneer in this field.” Kaboth-Bahr is happy to be able to take a big step forward in her academic career. Integrating statistics across long time scales is new to her. She wants to learn that here. In return, she contributes the marine component that has so far received too little attention in Trauth’s group. “We put everything on the desk and see what fits,” she says very pragmatically.

She can well imagine working in this field in the long term. As a postdoctoral researcher, she will first research in Potsdam for three years and then embark on a path to a professorship. And teach. She has only been at the university for a few months but already gives lectures on paleoclimatology. She will surely stop by the Alfred Wegener Institute on Telegrafenberg. She knows that the university is well networked and closely cooperates with the institutes there. She will make use of it. She does not feel like going on expeditions to arctic regions at the moment. Her attention is focused on Africa.

Dr. Stefanie Kaboth-Bahr studied geoecology at TU Bergakademie Freiberg. Since 2019, she has researched at the Institute of Geosciences of the University of Potsdam within the Potsdam Open Topic Postdocs Program.
E-Mail: stefanie.kaboth-bahruuni-potsdampde

This text was published in the university magazine Portal Wissen - One 2020 „Energy“ (PDF).