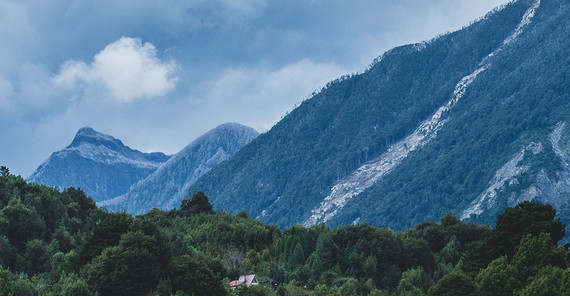 Ash and ice are phenomena that the researchers around Prof. Dr. Oliver Korup and his Natural Hazards working group are equally fascinated by. Accordingly, they study volcanic eruptions in Chile and glaciers in the Himalayas. And their research has produced some surprising results.

Following the eruptions of two volcanoes in the south of Chile ten years ago, trees in the surrounding rain forests were covered by thick layers of ash. Years later, when hillslopes around the volcanoes began to slip, Korup and his team decided to take a closer look. For the first time, the geographers systematically accounted for these significantly delayed natural hazards caused by volcanic activity. The slopes in the volcanoes’ vicinity were covered in such thick layers of ash that the trees had died. “We assume they have suffocated. The roots are rotting, and hundreds of tree skeletons with neither leaves nor branches dot the landscape,” Korup says. Over time, with the roots dying, the soils are losing their stability. To those responsible for the safety of roads, infrastructure, and settlements in the area, this elusive natural hazard triggered by volcanic eruptions poses major challenges.

When a volcano erupts, the people living nearby have to leave the danger area as quickly as possible. Once the volcano has calmed down – often only after a few years – they are allowed to return. This is also what happened in Chaitén, a town some 10 kilometers from the volcano of the same name with a height of 1 122 meters. Its most recent eruptions took place between 2008 and 2009. Within just a couple of hours after the eruption had started in 2008, the first residents of the town and its surroundings were brought to safety. At first, it was not clear whether the area could even be made habitable again, because of the destruction caused by the mud flows. A few years later, initiatives formed to return former residents, which, of course, will take some time.

Most of the damage caused in the town and its surrounding areas was not due to the volcanic eruptions themselves, but the scattered ash. “The volcano ejects up to 1 cubic kilometer of ash into the atmosphere over several weeks to months, and the ash then forms thick layers in the range of centimeters or decimeters on the ground,” Korup points out. These layers are washed away by rain, enter the river system, and bury entire forests, houses, and the infrastructure. For 10 years, the researchers have been monitoring developments in the field, particularly delayed mass flows and landslides. More recently, drones have also been used for comprehensive site measurements. The region is very well documented by satellite images, so the researchers are able to record and quantify damage to, and changes in, the vegetation – which has tended to play a secondary role in natural hazard management until now. “We find that the number of landslides has grown exponentially, especially where the layers of ash are thickest,” Korup states.

While a study on the eruption of Mount St. Helens in the southern part of the U.S. state of Washington in 1980 – one of the largest volcanic eruptions of the 20th century – is available, systematic research as performed by the Potsdam team who are documenting and analyzing the delayed consequences of volcanic eruptions is novel. To continue this research, Dr. Christian Mohr, who is a co-researcher in the project, has filed an application with the Emmy Noether Program of the German Research Foundation DFG. Using computer models, he intends to focus more on hydrological and mechanical aspects of the landslides around Chaitén.

On the contrary, PhD candidate Georg Veh is interested in cold and ice. Glacial lake outbursts remain a significant hazard, and have become the subject of particularly intense research recently. Veh is studying the natural hazards resulting from glaciers melting in the Himalayas, the highest mountain range in the world stretching across some 3 000 kilometers from Pakistan to Myanmar. When glaciers melt, lakes are forming. When they expand, moraines fed by glacier flows may collapse, as ice or debris break off and fall into the lakes, causing waves. Besides, landslides can also cause such outburst floods. As a result, a huge flood wave forms and rushes down the valley with a speed of several meters per second. In such events, people in the area have very little time to escape or protect themselves from the consequences of these natural hazards. Early warnings could be provided if there were only a few lakes to monitor – but there are around 5 000 lakes in the Himalayas, and new ones are forming each year. Measures for the protection of the population are difficult to implement as many of the lakes are located in remote areas. As glaciers are located at altitudes of between 4 000 and 5 000 meters, they are hard to reach, and the installation of an early warning system has been limited to few sites.

Using an automatic search algorithm that Georg Veh developed, he has analyzed more than 8 000 satellite images covering a period of 30 years. In this way, the researcher found that lakes shrink and disappear. “The pictures also tell us that broad sediment disturbances form below the lakes. They occur when water masses move down to the valley and deposit sediments there,” Veh explains.

More recent hypotheses have suggested that with the number of lakes increasing, the number of outbreaks will increase, too. Veh has been able to prove that this is not the case. “We searched the entire Himalayan arc for such outbreaks to find out how often glacial lake outbursts occurred. At least for the past three decades, there is no proof that the number or rate of outburst floods has been increasing,” Veh states.

Yet these findings should not be interpreted to mean that the hazard will remain unchanged. Some regions in the Himalayas are very seriously affected, others less so. The research done at Potsdam makes it very clear that, in times of climate change, precise and differentiated studies are crucial for reliable assessments of natural hazards.

Georg Veh studied physical geography at the Catholic University of Eichstätt-Ingolstadt. Since 2015, he has been a PhD student at the Graduate School “NatRiskChange” (Natural Hazards and Risks in a Changing World) at the Institute for Environmental Sciences and Geography at the University of Potsdam.
Mail: georgvehuni-potsdamde