Interplay of Nature – How biodiversity relates to ecological dynamics 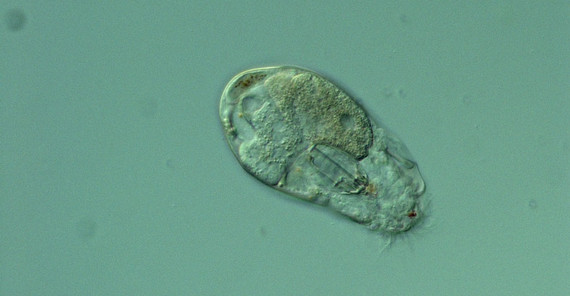 Biodiversity is rapidly declining worldwide, on land and in the water. In Germany alone, a quarter of all plants and a third of all animal species are considered endangered. The reasons are manifold. They include climate change and a growing world population, which is causing the disappearance of important habitats. It is increasingly difficult for ecological populations and communities to adapt to the changing climatic and environmental conditions. Science, but also politics and society, face the challenge of finding solutions that stop the loss of biodiversity. The DFG-funded Priority Program “DynaTrait” wants to contribute to finding such solutions. Its goal is to investigate the dynamics in aquatic ecosystems and previously neglected feedback loops. The functional traits of animals and plants play a key role in determining how well individuals can respond to new environmental conditions.

The climatic chamber has a temperature of 22°C. It is warm - and obviously just the right temperature for the chemostats inside. PhD student Svenja Schälicke explains what is going on in the glass flasks. She is doing research in one of the DynaTrait subprojects. She explores the effects of food quality on trophic interactions, focusing on the role of essential biochemical nutrients. “In the chemostat experiments, we investigate how populations of different algae species and rotifers are developing over a specific period of time,” she explains. The researchers investigate so-called predator-prey cycles, which result from the animals’ feeding behavior and growth as well as the growth of the algae. Two factors determine the food and growth of rotifers: quantity and quality of the available algae.
Schälicke and her colleagues can influence both from outside. The quality of food changes, for example, when essential omega-3 fatty acids and phytosterols are added. As a result, the normal predator-prey cycles between algae and rotifers suddenly change. The processes in the chemostats are very complex. To better understand them, additional experiments are performed in the lab. “Using these controlled population growth and feeding experiments, we can examine how the quality of the algae eaten by the rotifers promote or inhibit the rotifers’ growth and cause temporal variations in population sizes in the chemostats,” says the junior researcher, who had to put a lot of detailed work into the chemostat experiments.

In parallel to these experiments, the project team undertakes a lot of hard theoretical work. What might happen within the food webs is first simulated in mathematical models on the computer. “However,” Schälicke says, “we first need the results of the laboratory population experiments, for example the animal growth rates under different algae quantities and nutrient compositions.”
A fellow PhD student, Michael Raatz, analyzes these models in more detail. They predict how populations will develop over time. At the moment it seems very likely that diversity in the quality of algae enables the coexistence of several algae species alongside the rotifers.
The theoretical and practical efforts have already paid off. The initial research results show that the population growth of rotifers depends on the algal species available to them. The individual nutrient properties of the algae play a key role. The team also found that different strains or genotypes of the same rotifer species respond differently to the quality of food. Obviously, even these microorganisms have different requirements.
The subproject will run until the end of 2018. In the chemostats, the researchers are currently testing two algae of different biochemical qualities and one rotifer species. The predator population will evolve depending on how the developing quantity of the prey species and how their quality will vary. “In the best-case scenario regular predator-prey cycles would develop,” Schälicke says.
PD Dr. Alexander Wacker thinks that the project is on the right track. He leads the team that, apart from ecological modeling, also carries out research in the lab and in the field. “The project goal is to link established food-quality effects to recent concepts of predator and prey trait variations,” he says. The team wants to investigate how food can alter traits in both populations and influences complex interactions between groups. So far, science has not sufficiently understood the feedback loops between the trophic levels. “This is crucial for predicting how populations and food webs respond to changing environmental conditions,” Wacker says.

Eating and being eaten

What is behind the individual subprojects explains by Ursula Gaedke, Professor of Ecology and Ecosystem Modeling and head of the Priority Program in the office next door. “We try to understand the feedback between the diversity of functional traits and biomass dynamics,” she says. Nature creates an interplay according to which organisms of a food web adapt under pressure. If for example, the predators’ feeding behavior changes, it will impact the prey population. “It is a very complex structure,” Gaedke says, and our Priority Program faces the great challenge of sorting it out.” She illustrates the complexity of the individual processes with a picture. If there are many small crustaceans such as water fleas in a water body, the number of edible algae will decrease. The algae begin to protect themselves by forming colonies or long threads or by forming small spines. The predator responds by changing its own behavior or growth. “This has a huge impact on the biomass, both in the prey and the predators.” The process will not come to an end at this point because if the predator has changed the prey population, the latter will change in turn. Fewer colonies will be formed and the cycle will start again from the beginning.

All of this comes at a price. Developing spines, for example, costs energy. “It is the dilemma of defense and growth. When investing more in defense, the algae grow more slowly - with consequences for the biomass and ecosystem services,” explains the experienced biologist. As part of the program, the researchers take a closer look at the organisms on both sides. They examine how different prey and predator species are, what costs they have to take on and how fast they are able to adapt over many generations. Microorganisms are particularly suitable for this purpose. The researchers use them to understand dynamic processes in rapid cycles. In water fleas, for example, changes over generations can already be seen after eight and in rotifers even after three to four days.

In the future complex management models will be necessary

Prof. Gaedke emphasizes the importance of models for such research projects. “Ideally, we first create a model to get a better understanding of the system,” she explains. Only after this has been tested in specific conditions are elaborate experiments carried out. This is often done by other research groups in Germany, who have established cultures and experimental setups for those experiments over years.
Gaedke and her team are facing a huge task, which they can neither solve alone nor in the short term. The goal is to develop management models, for example for oceans. “We need models that show how processes work even under changing environmental conditions,” says Dr. Alice Boit, who is scientific coordinator of the Priority Program. “This has been the limit of our knowledge so far.” We are not yet able to predict what the plankton in the oceans will look like in 100 years. “Political stakeholders, however, need a basis for taking decisions. “This requires modular models applicable to a specific system that enable a certain degree of transferability,” Boit says. The crucial point is to bring the specific into a general form.
The researchers still have a lot of work to do to accomplish this goal. But they know that time is ticking. “We have to do use the means available to us to help politicians so that they can take decisions that are more important than ever for the preservation of our ecosystems,” emphasizes Gaedke. “Because dwindling biodiversity means reclining adaptability, which in turn makes the system more susceptible to variability in the climate. These are two mutually amplifying processes.”

Prof. Dr. Ursula Gaedke studied biology and mathematics in Oldenburg, Texel, and Oxford. In 1988, she earned her doctorate in ecological modelling in Oldenburg. She gained her habilitation for the analysis and modeling of pelagic food webs at the University of Konstanz in 1995. Since 1999, she has been Professor of Ecology and Ecosystem Modeling at the University of Potsdam.
gaedkeuuni-potsdampde

Dr. Alice Boit studied biology in Berlin and earned a Master of Science in Digital Media in Bremen. In 2012, she wrote her dissertation about ecosystem modeling at the University of Potsdam. She is scientific coordinator of the DFG Priority Program DynaTrait and postdoctoral researcher in the working group Ecology and Ecosystem Modelling.
aboituuni-potsdampde

PD Dr. Alexander Wacker studied and obtained his doctorate at the Limnological Institute of the University of Konstanz. After postdoc studies in Basel, he became Junior Professor of Theoretical Aquatic Ecology at the University of Potsdam in 2004. Since December 2014, he has been leader of the DFG-funded Heisenberg Group “Theoretical Aquatic Ecology and Ecophysiology”.
wackerauuni-potsdampde

Svenja Schälicke studied biology at Freien Universität Berlin and marine biology at the Universidad de la Laguna (Spain). She received her Master of Science in ‘Ecology, Evolution and Conservation’ at the University of Potsdam in 2015. Since 2015, she has been a PhD student in the Heisenberg Group „Theoretical Aquatic Ecology and Ecophysiology“.
svenja.schaelickeuuni-potsdampde