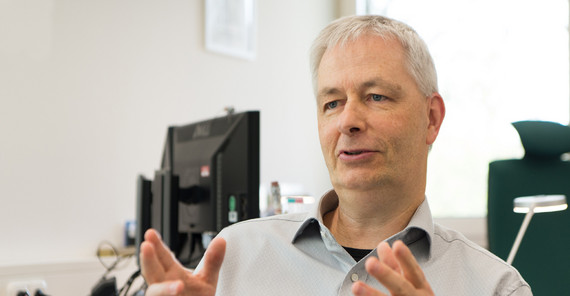 The Arctic, deserts, and volcanos: Life exists in very unexpected places – and on a surprising scale. Geomicrobiologist Prof. Dr. Dirk Wagner tracks down these lifeforms. He focuses on tiny organisms that are not only able to withstand such extreme environments, but in fact need them to survive.

In our series “Pearls of Science”, we regularly introduce researchers from institutions connected with the University of Potsdam in the “pearls – Potsdam Research Network“. In this issue: Prof. Dr. Dirk Wagner from the Helmholtz Centre Potsdam – German Research Centre for Geosciences (GFZ).

The Atacama Desert in Chile is one such extreme environment. It stretches some 1200 kilometers along the South American Pacific coast and is considered the driest desert on Earth. Its average precipitation is 0.5 millimeters – per year. Some parts of it have seen no rain for decades. Temperatures are around 30°C during the day and sometimes dip down to -15°C at night. “It’s tempting to think: How can any living being survive there,” Dirk Wagner says. “Fellow geoscientists – with whom we collaborate closely – are confused when I tell them that many lifeforms exist where nothing grows – albeit at the microbiological level. One gram of soil may well contain a million organisms,” explains Wagner, who is Head of the Section Geomicrobiology at the Helmholtz Centre Potsdam – German Research Centre for Geosciences (GFZ).

It is exactly this extraordinary biological diversity that draws Dirk Wagner to places like the Atacama Desert or the Namib Desert in southwest Africa. His most recent trip to South America was in March 2016 to collect soil samples. “The climate there is really harsh – you automatically eat less, have to drink a lot, and sense the strong radiation you’re being exposed to.” The collected samples are frozen and then taken to Potsdam, where they are analyzed in a lab. Wagner and his colleagues are particularly interested in which organisms live in the soil and how they adapt to such extreme environments. The researchers use two methods to determine this: One approach is to carefully isolate individual organisms from the samples, ultimately using DNA analysis. Many of these organisms are being described for the very first time. Classifying organisms is the backbone of microbiological research, as Wagner explains. After all, no more than 1-3% of all microorganisms in soils have been identified. A disadvantage of the method is that it cannot establish in what numbers or proportions certain organisms occur or how they interact with each other and with their geological environment. To learn more, the researchers analyze the environmental DNA, i.e. the entire genome of all organisms in a soil sample. “This enables us to describe the whole community in terms of biodiversity, composition and function,” Wagner says. And from here, the researchers dig deeper into what currently interests them most: How do microorganisms interact with their environment? After all, the influence of the tiny organisms on the structure and composition of the soil is crucial for the development of entire habitats. They significantly contribute, for instance, to humus accumulation and aggregate formation – major processes in soil development that stabilize the soil, reduce erosion, and allow higher organisms like plants to move in. “For a long time, geoscientists believed that surface processes are influenced only by tectonics and climate,” Wagner explains. “Vegetation hardly played a role. Everyone now knows, though, that this is not the case, yet the many influences of microorganisms on soil development are still not sufficiently factored in.”
After returning from the Atacama Desert, Wagner and his colleagues designed an experiment to find out how the microorganisms “process” the soil. The researchers prepared two different soil systems – one with microorganisms and one without – and tested them under simulated natural conditions in dry-wet cycles. “I was skeptical whether we would see differences in soil formation processes,” the researcher says. “But we were, in fact, able to demonstrate in our first pilot experiment that microorganisms do contribute significantly to aggregate formation and, thus, to soil development and stabilization.”

In permafrost, too, there is a lot of life below the surface

As a geomicrobiologist, Wagner is used to moving between sciences. Researching microflora activity in a terrestrial environment requires a combination of biology and geosciences. As a student of biology in Hamburg, Wagner began looking for life in places where others might see only a stone or uninhabited nature. After choosing soil science as his minor, he became interested in interdisciplinary work. In his PhD thesis on the release of methane from rice soils in China, the researcher again combined microbiology and soil science. Since then, his research interests have focused on combining these two disciplines.
In 2000, Wagner joined the Alfred Wegener Institute Helmholtz Centre for Polar and Marine Research (AWI) at Potsdam, and again a fixation of his – this time on polar research – turned out as a stroke of luck. Since then, his research has taken him to permafrost regions in Siberia, Canada, and the Antarctic, for instance, which microbiologists had long ignored. “Permafrost soil was thought to be sterile until 100 years ago. We now know that there is as much life in it as in any other soil.” Wagner has long been researching how microorganisms that are also active in frozen soil affect material flows. He and his colleagues are currently determining what will happen if permafrost soils start thawing at greater depths and over longer periods as a result of climate change. “The boundary layer between the active melting zone and the permanently frozen sediments is of particular interest for the development of permafrost landscapes into greenhouse gas sources or sinks. Wells have, therefore, been dug in the upper sediment layers to help us understand the actual and potential microbiological processes taking place there.” After all, large amounts of carbon are stored in permafrost soil sediments. Once they start thawing, microorganisms begin converting the carbon into greenhouse gases. “This is a ticking time bomb; if large areas of permanently frozen ground start to thaw, large quantities of carbon dioxide and methane could be released and further heat up our atmosphere,” the researcher explains.

The deep biosphere is a huge ecosystem

In 2012, Wagner switched to the Helmholtz Centre Potsdam – German Research Centre for Geosciences (GFZ), where he began focusing on another seemingly inhospitable place: the deep biosphere. “Until 30 years ago, it was believed that hardly any life existed meters below the surface.” It is now estimated that there is almost as much biomass in the deep biosphere as there is at the surface, and microorganisms live at depths of up to three kilometers with the high temperatures approaching those of the Earth’s core being the only limit. This is exciting research for geomicrobiologists: “The deep biosphere is a huge ecosystem. We currently know so little about it and have so many questions.” What organisms live there – and what do they live on? What is their role in the cycle of matter at those depths? How are they linked to processes at the surface? And what happens if, for instance, humans want to use their habitat to extract raw materials, produce drinking water and geothermal energy, or store radioactive waste? We can only speculate about what the answers will be. Research on the deep biosphere is still in its infancy, mainly because it is far more difficult to access than deserts or permafrost regions. Unlocking its secrets requires drilling deeply, which is time-consuming and expensive. Researchers from all over the world are, therefore, joining forces to collect sediment and rock samples from suitable places several hundred meters below the surface, for instance in the “International Continental Scientific Drilling Program (ICDP)”. Wagner and his team have so far been able to analyze sediments from Lake Towuti in Indonesia and crater lake El'gygytgyn in Siberia. They are currently involved in a drilling project at the Eger Rift in Bohemia: – “a hotspot for the deep biosphere, since fluids carrying carbon dioxide and mineral nutrients surface there, thus promoting microbiological life,” the researcher explains enthusiastically. “We hope to learn a lot about the correlations between biological and geological processes there.”
Since interdisciplinary thinking is nothing new to Wagner, it hardly comes as a surprise that his next project will combine geosciences, biology, and climate research as part of a German Research Foundation (DFG) excellence cluster. Only in April 2017 did researchers at the University of Potsdam apply for it, along with partners of the GFZ, the AWI, the Potsdam Institute for Climate Impact Research (PIK), the Museum of Natural History Berlin – Leibniz Institute for Evolution and Biodiversity Science (MfN), and Technische Universität Berlin. For Wagner, this is exactly the kind of exciting project he likes the best: “For the first time, we would set out to research developments on Earth’s surface on a large scale – jointly and from various perspectives – to find out how they are interconnected and what we can learn from them in order to better understand how Earth’s system develops. I expect this will also bring many fresh ideas into my work.”

It doesn’t get any more extreme – except in space

Wagner’s research interest is almost boundless. Extreme heat, cold, and depth – for him, none of these are limits. He is now looking into space from the Arctic. “It was initially a sort of spin-off from other work, but astrobiology has since become my hobby,” the researcher says with a laugh. He is interested in extremophilic microorganisms, i.e. those thriving in extreme conditions. Some, for instance, survive on hydrogen and carbon dioxide alone – which would predestine them for life on Mars. “Over the years, I have gradually become part of the astrobiology community and done some smaller projects in the field.” And larger ones as well; most recently, he was involved in an experiment at the German Aerospace Center (DLR) in Berlin-Adlershof that sent microorganisms from Siberian permafrost into space. Using similar minerals to those on Mars, the samples were placed in an exposure module for months outside the International Space Station (ISS) to determine whether they can also thrive in such an environment. “Even if the organisms don’t survive, we will probably see what’s left of them. These biosignatures would help future Mars rover missions identify possible traces of extraterrestrial life.”
Wagner is confident that life will eventually be found on Mars. After all, methane has been detected in its atmosphere. “There are only two possible explanations for this: active geological processes like volcanic activity – for which we have no evidence yet – or biological processes. And there is much to be said for the latter.”

Environmental DNA is genetic material that organisms leave behind in their habitat. It is detectable practically everywhere – in water, air, and soil. DNA analysis helps researchers identify certain known species in their respective samples. Broad analysis of all DNA traces in a sample can, however, also offer insight into an ecosystem’s existing species and biodiversity.

THE GFZ
The Helmholtz Centre Potsdam – German Research Centre for Geosciences (GFZ) researches Earth’s system. Its over 450 researchers and almost 200 PhD students research the history of our planet, processes at and below its surface, and the many interactions between geo-, cryo-, hydro-, atmo- and biospheres.
www.gfz-potsdam.de

Read this and other articles on research at the University of Potsdam in our research magazine Portal Wissen.