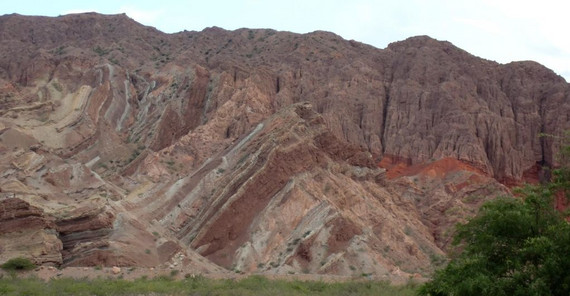 A highlight for geoscientists. The Andes have everything that’s interesting in geology. Photo: Andreas Bergner

The Andes are an Eldorado for geoscientists: The South American mountain range is one of the earth’s youngest and most active ranges, making it one of the most interesting in geological terms. The Andes are an ideal natural laboratory for researching volcanoes, plate tectonics, and mountain emergence and erosion. This is why geoscientists from the University of Potsdam are intensifying their collaboration with their colleagues in Argentina.

Potsdam’s geoscientists have a long tradition when it comes to research relationships with Argentina. For over 20 years, researchers from both countries have regularly gone into the Andes to do research and share their methods. Now geo-researchers want to expand their contacts.

“The long-term goal is educate our students together,” explains Dr. Andreas Bergner, the scientific coordinator at the Institute for Earth and Environmental Studies.  In order to make this a reality, the University of Potsdam became a member of the German-Argentine University Center (DAHZ) in 2014. The University has formed a research network with the universities of Buenos Aires, Tucumán and Salta in the geosciences. Supported by the German Academic Exchange Service (DAAD) and its Argentine counterpart, CONCET (Consejo Nacional de Investigaciones Cientificas), the DAHZ promotes academic cooperation between the two countries, especially in the development of bi-national courses of study. The DAHZ subsidizes exchange visits by students, doctoral candidates, and scientists.

The first geosciences student from Potsdam is already in Argentina. He will stay at the University of Tucumán for ten months. The Master’s student is completing courses there that will be recognized in Potsdam. Yet developing a shared course of study is not entirely easy, admits Bergner. “The Argentine university system is quite different from the German one.” There are typically no Bachelor’s or Master’s degrees; instead, there are Licenciatura, which are comparable to the former German diploma. Nevertheless, they are trying to create a shared Master’s program, says Bergner. “We’re currently in negotiations.”

There is already a shared exchange program for doctoral candidates in which students have Argentine and German supervisors. The first three Argentine doctoral candidates will come to Potsdam this summer and stay for about six months to complete a bi-national doctorate in the Cotutelle-de-thèse procedure. Doctoral candidates from Potsdam will also travel to Argentina. Planning for an international PhD research group began in 2015, and it should be funded by the German Research Society; this could grant firmer footing to the doctoral exchange. An application to this effect has already been submitted to the Society.

But why Argentina? The Andes are a special highlight for geoscientists from Potsdam. “The Andes have everything that’s interesting in geology. You can experience geology there in an immediate, live way,” says Bergner. The region is particularly interesting because of its “young” geology and wealth in natural resources. Argentine colleagues are excited about the mutual exchange because of the possibility of broadening their methodological spectrum in Potsdam’s well-equipped laboratories, and they are also enthusiastic about close cooperation with the University and extramural research institutions.

Potsdam’s geoscientists also are already considering the next generation of scientists; their initiative has led to the founding of a German school in Buenos Aires. Each year, about 50 Argentine pupils from the Pestalozzi School take a field trip to the campus at Am Neuen Palais before they begin living with German host families for three months. The University, as a partner to the “Pestalozzis,” gives the students an overview of opportunities for study in Germany. This is because the goal is to inspire the students to study in Germany. In return, students in Potsdam who are studying to become teachers can complete an internship at the school in Buenos Aires.