SpiderMAEN – Prof. Andreas Taubert and his team of chemists “spin the silk” from gene to material 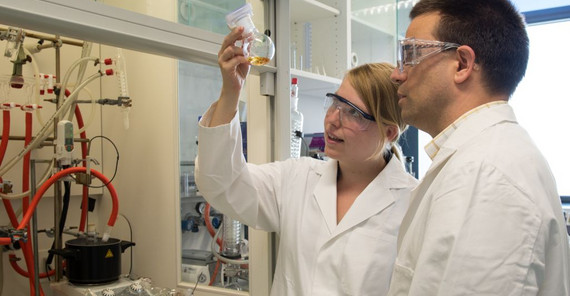 SpiderMAEN is the current project of Prof. Andreas Taubert – alluding to the well-known comic superhero. The professor and his research group are not only fascinated by spiders but particularly by spider silk, which plays an important role in their latest research. The natural product has many positive properties. Relative to its weight, silk’s mechanical load capacity is four times that of steel. Silk can be stretched to up to three times its initial length without tearing.

When you ask Andreas Taubert, Professor of Supramolecular Chemistry and Materials Chemistry, about the background of the DFG-funded project “Recombinant Spider Silk-based Hybrid Materials for Advanced Energy Technology”, he compares his approach to that of children. “We go through the world and look for something exciting.” This is how he came across spider silk while looking for biological materials. Spider silk is extremely robust, flexible, biodegradable, lightweight, and water-resistant but has a high water absorption capacity. It has a diameter of only 0.0005-0.005 millimeters and is 20 times thinner than a human hair yet three times stronger than polymers. With only 200 grams of spider silk you could span the Earth. A spider silk rope with only a one-millimeter diameter could carry an 80-kilogram human.

Previous DFG-projects sought to produce recombinant hybrid and functional materials from synthetic molecules under controlled crystallization conditions. The researchers used synthetic polymers and tried to produce hybrid materials with calcium carbonate, calcium phosphate, and ferrite. By combining the properties of inorganic minerals and organic polymer components, these hybrid materials took on interesting characteristics, which can be used in artificial biomaterials.

The new priority program “Generation of Multifunctional Inorganic Materials by Molecular Bionics”, which includes Prof. Taubert’s subproject, takes different approach, one that focuses on material technology. The researchers want to apply this biotechnological method for new materials, to follow the path from bacterium to superconductor, so to speak. “First the bacterium is ‘forced’ to produce unnatural organic proteins or carbohydrates, something that normally does not happen,” Taubert explains. Next the molecules interact with inorganic substances not mineralized by biological organisms. The researchers then have to manipulate genes of these organisms to be able to realize material technologies, i.e. to produce new proteins. They strike the path from gene to material. There are different ways to do so, but all require a non-biological inorganic material.

The Potsdam chemists use spider silk from Thomas Scheibel’s research group at the University of Bayreuth. The silk construct that Taubert and his team use for the mineralization experiments resembles a piece of paper or felt.

The scientists are initially focusing on the development of reliable synthesis protocols that are supposed to ultimately yield a photocatalytically active spider-silk inorganic hybrid material. The main problem is that spider silk is insoluble. The challenge for the researchers is to create a processable material because they have little use for an “insoluble lump”. The researchers need a material in a condition that facilitates useful processing. It has become possible to spin fibers as well as film, gels, and capsules from spider silk.

The chemists want to enter a new “world of properties”, and they are convinced that they are on the right path. “If we keep an eye on the technology transfer vision, it will be possible to submit a follow-up application in 2016, when the current project ends,” Taubert says. He finds preparing applications very useful because you are forced to intensively deal with the subject and to stay caught up with the current state of knowledge in order to find a niche that allows you to distinguish your research from others’. It differs from academic publishing. The chemists also developed the current project in this way, which presents an exotic combination of spider silk and inorganic material and is important for basic research.

Stefanie Krüger studied chemistry at the University of Potsdam. Since March 2014 she has been a PhD student in Taubert’s research group and is dealing with “Spider Silk-based Multifunctional Inorganic Materials”.