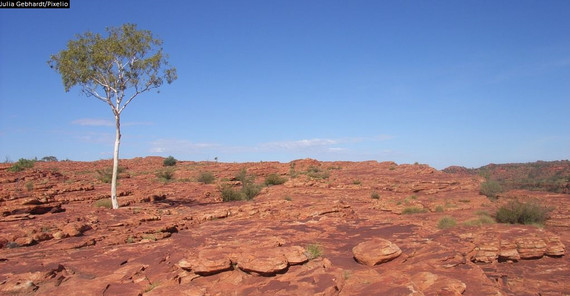 Friedrich Wilhelm Ludwig Leichhardt was born in 1813 in Trebatsch, Brandenburg. At the age of 35, he disappeared during an expedition through the hot Australian deserts under circumstances still unclear. His 200th birthday offers a new opportunity to commemorate him both in Germany and Australia and to review and reassess his work as well as the related stories from a postcolonial perspective. The research project “Leichhardt’s Legacies: Locating the Disappeared” at the University of Potsdam funded by the DAAD takes up this challenge.

The sixth of nine children of a peat inspector in the water-abundant area of what is today the rural district Oder Spree, Ludwig Leichhardt studied practical philosophy, history of religion, linguistics, natural history, botany, metaphysics and physics in Berlin and Göttingen. He continued his studies in London and Paris and then travelled to Australia in 1842. From 1844 to 1845 he led his first expedition into Australia’s unexplored heartland. After a journey of more than 4,800 km from Brisbane to Port Essington, he returned to Sydney a hero and discoverer of the northeast route through the continent. He was not only admired in Australia for his discoveries, among them the discovery of Australia’s biggest coal deposit that would eventually contribute to the country’s economic development, but also received prizes in Europe for his scientific achievements in geography and botany.

The polymath and explorer embarked on a second expedition hoping to cross Australia from the east to the west. Although this attempt failed, Leichhardt did not give up. After almost two years of planning and organizing, he set out for his third and final expedition through the red continent in 1848. He was again unable to find a route from the northeast to the southwest. Worse yet: The explorer and his entire team disappeared mysteriously and without a trace. All search parties failed to explain the fate of Leichhardt and his team in the years after their disappearance.

In their project “Leichhardt’s Legacies: Locating the Disappeared” Professor Anja Schwarz and Professor Lars Eckstein and their research partners focus on Leichhardt’s flamboyant personality and significance beyond national contexts. The enthusiasm both in Germany and Australia sparked by his discoveries resulted in many landmarks, streets and municipalities to be named in honour of Leichhardt. The enthusiasm in Australia faded in the 1880s as Germany was becoming a direct imperial competitor in the Pacific. Leichhardt’s detailed descriptions of the indigenous population in his travel journals may also have contradicted the white settlers’ depiction of the Aborigines as a ‘dying’ race without justified claims to their land. Although the polymath of Humboldtian character himself was not free from the prevailing racist views of that time, he did, however, take the people seriously, in both his writing and dealings with them. And because Australia fought alongside the British during the world wars, it became increasingly difficult to commemorate this German explorer, as a significant actor in Australian history. His gradual rediscovery started in the 1980s and continues to today. How Germans have remembered Ludwig Leichhardt has also depended on the political context. He is the celebrated son in his birthplace Trebatsch – temporarily renamed “Leichhardt” under National Socialism – where there is still the Ludwig Leichhardt Museum. In Cottbus, the Ludwig Leichhardt Gymnasium and the Leichhardt House bear the name of the famous explorer. However, his significance goes far beyond these individual national or regional contexts and is now the subject of the German-Australian research project.

In collaboration with colleagues from the University of Technology in Sydney, academics from Potsdam are tracking the transnational and transcultural heritage of Leichhardt. By dealing with his writing and the numerous arguments and discussions about him in biographies, literature, tourism and popular culture, they want to reassess this heritage from the present point of view. Schwarz and her colleagues want to remind us that in wanting to push and to reduce the borders of the unknown onto the Australian continent, Leichhardt was also laying the groundwork for its colonization. In celebrating Leichhardt’s achievements, it is easily forgotten, that the indigenous population has inhabited this country for more than 60,000 years: “They named their mountains and river long before. This country was not the blank, ‘dark continent’ that Leichhardt called it, and whose ‘heart’ he wanted to explore.” Here the historical shift of borders meets a postcolonial perspective, indicating the geopolitical context of Leichhardt’s travels and proclaims an intrinsic right to the land of the indigenous population. Leichhardt cannot, however, clearly be co-opted by one side or the other. Contrary to their historical intention, his travel reports have helped various Aboriginal groups support their legal claims for certain territories because their ancestors – as described by Leichhardt – were already living there. “Furthermore, I am particularly interested in the German reception of the Leichhardt narrative and the colonial imaginary it helped underpin. Traces of this colonial imaginary can still be found in the present,” Schwarz says of her research approach.

The DAAD-funded project provides the opportunity for an intensive exchange between two professors and three junior academics from Potsdam and Sydney respectively connected with several study visits. In addition, Leichhardt was the topic of the international conference “1001 Leichhardts” at the Fürst Pückler Museum Park und Schloss Branitz near Cottbus. The exhibition “’Gut möglich, dass meine Knochen für immer auf den Ebenen dieser Kolonie bleichen werden’: 200 years Ludwig Leichhardt” opened in the Fürst Pückler Museum on 4th May 2013 and the accompanying catalogue were curated and designed by members of the project team. The public got a first impression of Leichhardt’s work and legacy at the Potsdam Science Day “Thousand Questions, One City” in June 2013.

Professor Anja Schwarz studied cultural studies and holds a PhD in postcolonial studies. Since 2010 she has been Junior Professor of British Cultural Studies at the University of Potsdam.